The Classic Theatre Revives the Boisterous, Lunatic Farce ‘You Can’t Take It With You’

The cast of The Classic Theatre’s production of You Can't Take It With You photographed by Siggi Ragnar
The stage directions to You Can’t Take It With You, which won the Pulitzer Prize in 1937 and an Oscar for Frank Capra’s 1938 adaptation, situate all three acts in “a house where you do as you like, and no questions asked.” It is a boisterous, busy menagerie whose multiple, motley bric-a-brac challenge the sanity of a theater’s property master. The house, located around the corner from Columbia University in upper Manhattan, is a nest of ninnies whose typical dinner consists of cornflakes, watermelon and candy.

Grandpa, whose guiding principle is: “Don’t do anything that you’re not going to enjoy doing,” is a septuagenarian who stopped going to work 35 years ago and spends his time raising snakes and attending circuses and commencements. His daughter Penelope spends her time tapping out preposterous plays, because a typewriter was once mistakenly delivered to the house. Her husband Paul devises fireworks, with the help of Mr. De Pinna, an ice man who made a delivery eight years ago and never left.

Essie, daughter of Penelope and Paul, is an untalented would-be ballerina who is tutored by Boris Kolenkhov, a spectacularly effusive Russian émigré. Essie concocts candies in the kitchen that her husband Ed, who tinkles the xylophone, markets. Visitors include a boozy actress Penelope met on a bus and a Russian grand duchess who, though reduced to employment as a waitress, maintains a mien of majesty. “The world’s not crazy,” observes Grandpa, “just the people in it.”

The characters exist in such an airtight bubble of battiness that when Essie’s sister Alice asks: “Does anyone know what time it is?” no one knows. Ecstatically in love with Tony Kirby, her boss at the Wall Street firm where she works, Alice seems the only sane member of the household. When Tony’s wealthy, snooty parents come to meet the family of their son’s fiancée, the result is culture clash and hilarity.

Lorca, an intense one-man portrait of the death-obsessed Spanish poet, was the most recent production at the Classic Theatre stage. It is hard to imagine a starker contrast to what the company has chosen to kick off its 10th season — a raucous farce propelled by a cast of 17. You Can’t Take It With You is an exuberant ensemble effort, anchored by Allan S. Ross’ gentle, genial Grandpa, Catherine Babbitt’s vibrant Penelope, Maggie Tonra as the anxious young lover Alice, and Byrd Bonner as her snobbish potential father-in-law. But the rest of the cast — Randee Lutterloh, Megan van Dyke, Andrew Thornton, John O’Neill, Steven Starr, Justin Keown, Vincent Hardy, Hunter Wulf, Jim Mammarella, Whitney Marlett, Christi Eanes, Eastin Kandt and Magda Porter — also deserves kudos for providing a sold-out audience with as much merriment as must have enlivened rehearsals.

Like the Busby Berkeley musicals that provided escape into loony glamour during the Depression, this is not political theater, unless it be an ad for the Party of Carpe Diem. The play is dated only by fleeting topical references to Stalin and Roosevelt. It lacks the wisecracks that were the trademark of co-writer George S. Kaufman, the mind behind the wit of the Marx Brothers. However, it does share the anarchic spirit of Animal Crackers and A Night at the Opera, in which the picaresque Marx boys pop the buttons off a stuffed shirt. It is easy to sympathize with Grandpa, a tolerant proto-hippie who has not paid his taxes in 24 years and urges everyone to drop out. Why squander our lives in getting and spending, since, as he notes, you can’t take it with you? That is the privileged position of someone who can count on having cornflakes on his dinner table. We can indulge ourselves with the sweet lunacy created by Kaufman and Moss Hart because people do pay taxes, and taxes, like this play, provide disaster relief. 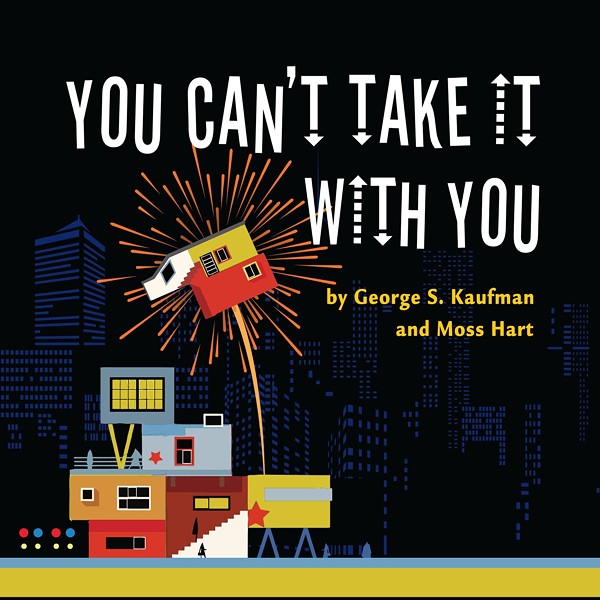