'The Gatekeepers,' Israel's unprecedented look at itself 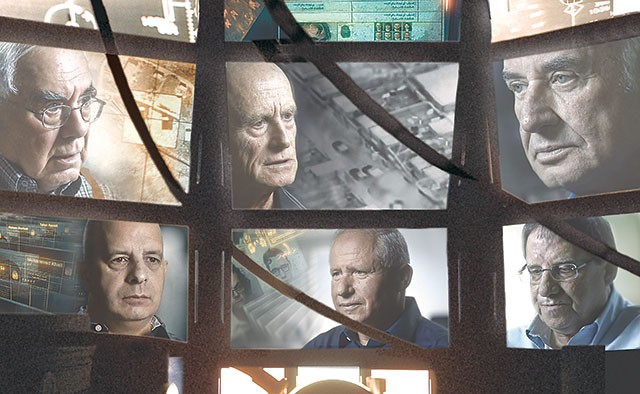 Except for isolated cases like Errol Morris’ Oscar-winning documentary The Fog of War (starring former Secretary of Defense Robert McNamara), in our buck-passing, “no comment” culture it’s almost impossible to imagine former American security officials offering up the kind of candor, regrets and blunt assessments of their country, leaders, and policies as the six former heads of Israel’s internal security and anti-terrorism agency, Shabak (more popularly known as Shin Bet), do in Dror Moreh’s Oscar-nominated documentary The Gatekeepers.

Shin Bet’s motto translates as “the defender that shall not be seen,” but in Moreh’s film, its six surviving directors — Avraham Shalom (1980-1986), Yaakov Peri (1988-1994), Carmi Gillon (1994-96), Ami Ayalon (1996-2000), Avi Dichter (2000-2005), Yuval Diskin (2005-2011) — are put under the heat of the spotlight, where they are grilled about their choices, actions, and opinions. What makes The Gatekeepers so engrossing is the conflicted emotions, relative ethics, and tortured reconsiderations these former members of Israel’s top brass express. If there’s a common thread to their positions, it’s that they each lack faith in their political leaders (only Yitzhak Rabin earns their grudging respect), have deep misgivings about the country’s current direction (one admits: “We are making the lives of millions of people unbearable”), and view the rise of Israel’s radical right (particularly the settlers and rabbis) as a serious threat to national security and stability. Without exception, they all support a two-state solution, with several voicing regret that “there was good faith from the Palestinians but not from our side.”

Charged with overseeing Israel’s own decades-long “War On Terror,” these men may look like ordinary grandfather types, but each is a smart, hard-eyed pragmatist who is used to making hard decisions. Their view of politics, security, the enemy, and the Palestinian people is nuanced, filled with shades of gray and more than a few rationalizations. Says one former director, “Politicians prefer binary solutions — do it, don’t do it. What’s unnatural is the power you have.” Says Avraham Shalom: “In the war on terror, forget about morality.” Moreh gets some startling confessions and insights from each man but also misses the opportunity to truly challenge his subjects on their regard for democracy, basic human rights and their own accountability.

From a narrative perspective, Moreh’s documentary lacks proper context or an overshadowing premise. History is presented as a haphazard and tortured highlights reel, as Moreh queries the six about the 1984 Bus 300 affair (the media discovered that two Arab hijackers were beaten to death by security forces after being arrested), strategic bombings of Palestinian terrorist leaders and the innocent civilians who get caught in the blast, the 1995 assassination of Israeli Prime Minister Yitzhak Rabin, a radical Israeli plot to bomb Palestinian buses and even the Dome of the Rock in order to ignite an apocalyptic war with the Arab world, and Shin Bet’s lethal use of cell phone bombs. What emerges is an incomplete, if fascinating, view of an agency that could be both brutally effective and morally suspect, but too frequently at the mercy of fickle and pandering politicians.

Ultimately, Moreh’s interviews present a treacherous moral maze where men of serious intent struggle with their sense of duty and decency. They each have a uniquely insider view and, from that perspective, express dwindling hope for the future. Avraham Shalom, regarded as the most ruthless of Shin Bet’s directors, concludes that, if progress is to be made, diplomacy and compromise must replace killing. But he observes: “The future is bleak. We’ve become cruel, to ourselves as well.”