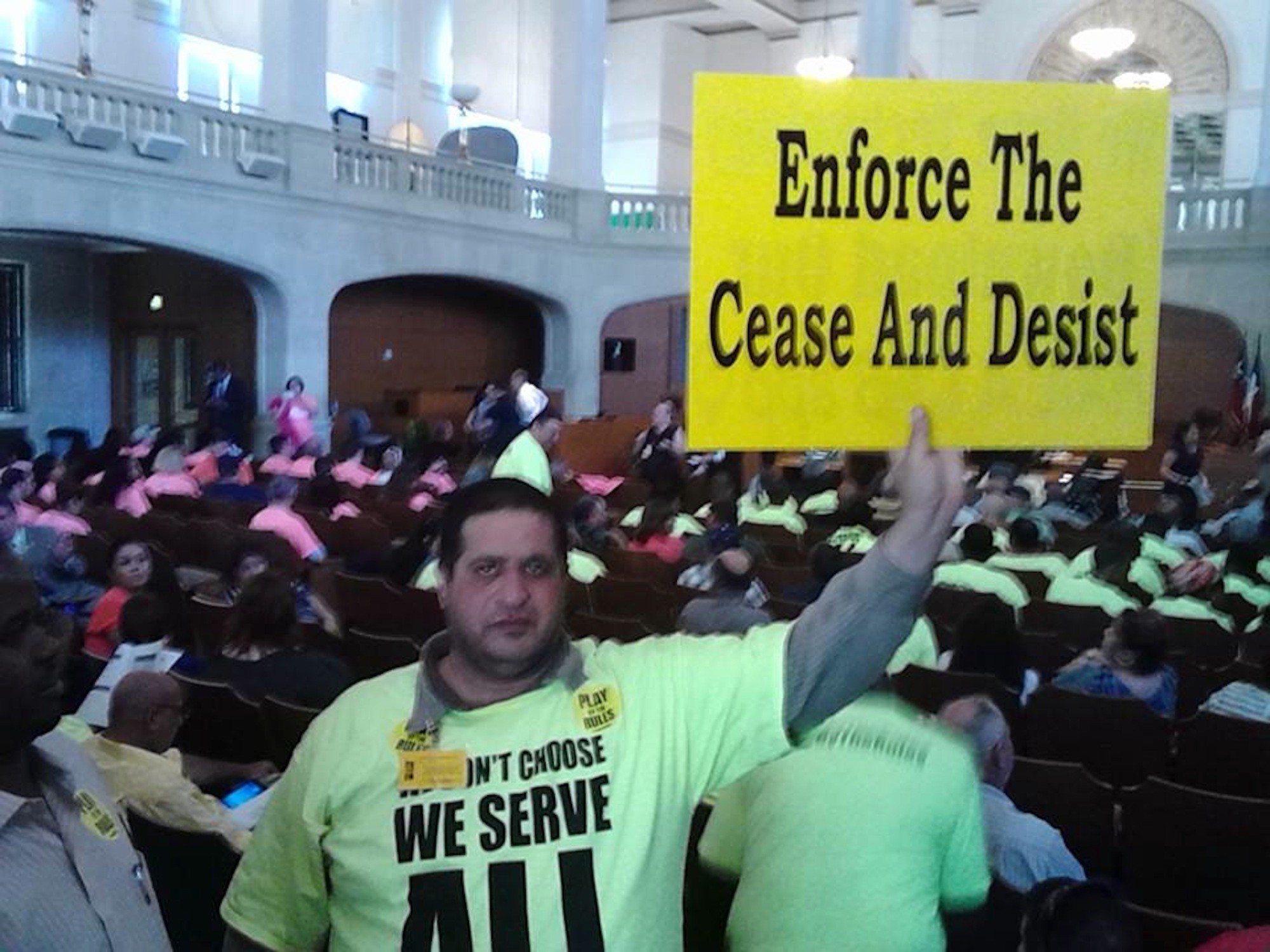 This is Gabriel Icab. He is a taxicab driver who is against allowing Lyft and Uber to operate in San Antonio. He said there is no compromise, outside of the ride-share companies following the law as it's written. San Antonio’s contentious ride-sharing debate is heading into Task Force Episode II. In a Wednesday Public Safety Committee meeting that featured approximately three hours of public comment (mainly from the taxicab lobby), proposed recommendations that would allow ride-share companies like Lyft and Uber to operate were turned down by committee members. Instead, another task force (the last one broke down and accomplished little, if anything) was established to further study the staff recommendations. And to be clear, the meeting was a spectacle as 90 people signed up to speak. The line was drawn right down the middle of the San Antonio City Council chambers with ride-share supporters wearing neon pink shirts on one side and opponents donning sun-blinding-your-eyes yellow on the other. With that mind, we thought we’d take a look at some of the more outrageous claims and arguments made during the public comment period. A recurring crazy argument that some ride-share opponents honed in on was that poor people do not have smartphones and elderly people do not know how to use smartphones. That argument tapered out after a 68-year-old woman who no longer drives and can’t even use one of her arms, told the committee that she regularly uses her smartphone to catch a Lyft ride. In fact, that’s how she got to the public safety committee meeting. As for poor people not having access to smartphones, have you tried finding any phone recently that’s not a smartphone? Here’s another fun one. One ride-share opponent has blown the conspiracy out into the open. Lyft and Uber are actually puppets of the global-masterminds over at Google. To be clear, according to this commenter, ride sharing is not about ride sharing; it’s about stealing personal data from consumers. While we could continue to explore a few more not-so-crazy-but-still-kind-of-crazy comments from ride-share opponents, we’ll end with the craziest comment of them all because the rest are sort of repetitive. One invigorated man whose voice crescendoed into thunder as he spoke, ended his anti-ride-sharing rant with an outrageous comparison: According to this speaker, allowing Lyft and Uber to operate by changing city code would actually be like slavery and San Antonio would be the Confederacy. His speech was met with thunderous applause from the taxicab lobby. So there’s that. Are you asking yourselves why we didn’t include any crazy ride-share supporter arguments in this story? The simple answer is, there weren’t any wacky arguments coming from that side. And we don’t want to marginalize legitimate concerns posed by opponents either. Those were there. But crazy is like a car crash and you can’t look away. Now, without further adieu, take a look at San Antonio Police Department’s presentation to the Public Safety Committee explaining their recommendations, which would allow Lyft and Uber to operate in San Antonio.