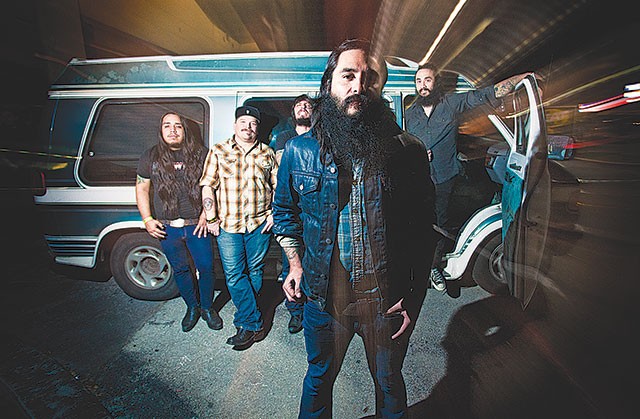 The Heroine channel that scuzzy, outlaw ’70s rock, right down to their ride

Jetting from coast to coast to record their latest, working with stellar producers and generally running around like they own the place, the Heroine certainly aren’t acting like a local band anymore.

If next year’s South by Southwest does for them what it’s done for any number of other breakout acts in the past, they’ll be making the big time and the days of being able to drive a mile and a half to watch them blow the doors off will be just a memory. If you haven’t seen the whirlwind of skuzzy energy that constitutes the live experience provided by Lynwood King, Dibby Disaster and the rest of the boys, they’re giving you another chance on Friday night at the White Rabbit, and it’s worth taking advantage of—the next time you see them, there could be a few thousand more people in the audience.

To tide things over until their inevitable ascent and all its attendant vice, the band (and their label, EMG) have graciously dropped a split EP, Songs from the Southland Vol. 1. It’s a pretty ambitious title for five songs, but they do their best to live up to it. “Who Do You Love,” thankfully, isn’t another stale cover of the blues chestnut but a snarly, sprawling original that sets the tone for the rest of the record with its filthy ’70s biker-bar energy. “Bluesman”, too, eschews the hokey promise of its title for a fun, freewheeling ride through a ZZ Top riff with a contemporary vocal arrangement. “Outlaw” is a tad lazier in its evocation of bad-boy party anthems, but it’s a good showcase for Johnny Lightning’s drumming, and the choogling throwback riffs and sweaty charm of “Silvertongue Lady” is as hard to resist as a makeout session in an AMC Javelin. “Comin’ Home” closes out the EP with a road song and all that this entails (predictable lyrics, too long, etc.), but it’s preceded by so much fun it seems ungracious to hold it against King and the gang.

The all-ages White Rabbit show will be a release party for the EP, so you’ll have a chance to hear for yourself what just might be the last live emissions from one of our town’s most dedicated comers before they become that band you have to stand in line to see.