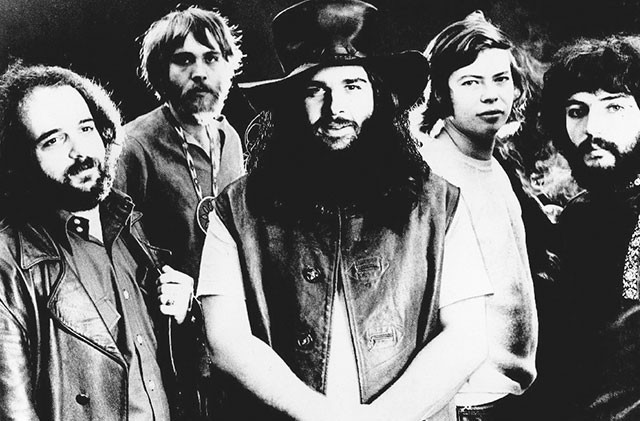 Thirty-two bands played the original Woodstock back in 1969. Of those 32, two are still at it today. And if you discount Santana on the grounds that he’s really more a guy than a band at this point, well, that just leaves Canned Heat.

Half a century is a long, long time for any band to stay at it, and certainly few would have predicted that, of all the superstars that weekend at Max Yasgur’s dairy farm, Canned Heat would be the ones still standing today. Only two of the original members of that ’60s lineup will still take the stage this Sunday at Sam’s Burger Joint. But what hasn’t changed is how they play the blues.

Alan Wilson and Bob Hite formed Canned Heat back in 1965 as a mutual appreciation club for their obsessive love of early blues records. They culled their name from Delta bluesman Tommy Johnson’s “Canned Heat Blues,” setting an early band precedent that would rarely be broken: Almost no note they played, on stage or on record, didn’t take its cue from one of those old records in their collections. The pair soon recruited a handful of similarly minded misfits to round out the classic Canned Heat lineup, including Larry Taylor, who notably played the bass track for the Monkees’ “I’m a Believer,” and guitarist Henry Vestine, who had just been kicked out of Frank Zappa’s Mothers of Invention for doing too much blow.

Originality never was the band’s strong suit. Their two biggest hits—“Going Up the Country” and “On the Road Again”—were nearly verbatim covers of decades-old blues tracks. But there was no denying their chops. From the late ’60s on, no one could out-boogie Canned Heat.

But despite the band’s vicious grooves and crazy antics (Bob Hite infamously rode a day-glo purple elephant to the stage), Canned Heat never quite took center stage, remaining in the backdrop of the late ’60s counterculture scene. Part of this was by choice. If Hendrix saw the blues as a vehicle to push further into the psychedelic, or Captain Beefheart found it a gateway into the absurd, Canned Heat saw the blues as an end to itself. They just wanted to boogie, a conservative stance that allowed for their graceful transition out of the flower power scene when it collapsed on itself a couple years later.

Not that the band was without hardships: founder Alan Wilson OD’d in 1970 and co-founder Bob Hite died of a heart attack a decade later. But the band boogied on, establishing themselves as one of the most respected acts on the blues circuit and playing the instrumental role of revivalists, bringing the likes of Sunnyland Slim (found driving a taxi in Chicago) and Skip James (laid up in a Tunica, Mississippi hospital) the acclaim they long deserved. Now operating as a four-piece around original members Larry Taylor and Adolfo de la Parra, Canned Heat has kept it steady by virtue of keeping it simple: just stick to the blues.