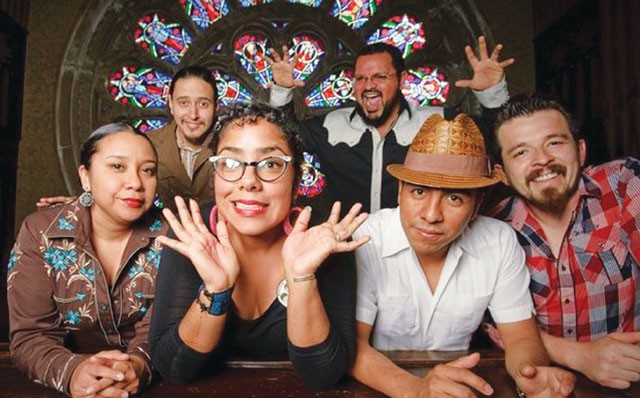 The financial crisis affects everyone, but non-profits are particularly susceptible — especially arts non-profits.

“If you’re going to get rid of something, why are we getting rid of art instead of football?” former San Antonio First Lady Linda Hardberger told me in 2008. “I don’t understand. If we’re going to start naming frills … [football] costs a lot of money. But nobody wants to cut football, and everybody wants to cut arts.”

Go tell it to Gwen Rivera, director of the International Accordion Festival, celebrating its 11th edition this weekend at La Villita. The eclectic festival, arguably the best music festival in the city, if not the whole state, routinely attracts some of the best masters of the instrument in genres ranging from Argentina’s chamamé and Bulgarian wedding band music to Louisiana’s Cajun zydeco and, of course, our own conjunto music. The free festival only receives a small percentage of grants and foundational support, and relies on community donations and a percentage of vendor sales. The event has an annual budget of $150,000, but last year’s $35,000 NEA grant was slightly reduced for this edition.

“This year the festival received a grant for $30,000, which we appreciate because arts funding was cut across the board,” Rivera told the Current. “In this economic climate we are still hopeful as is any non-profit, but we still need the help of our most valued resource: our community. Last year we collected donations at the festival, which really helped us going into 2011, and we are hoping that our fans will do the same to help take us into 2012 — especially if we want to continue to offer this amazing free event.”

But the festival has more than the economic crisis to struggle against — they’ve also got to contend with U.S. Congressman Jeff Flake of Arizona. In May, Representative Flake grilled Rocco Landesman, chairman of the National Endowment of the Arts, as to why the NEA should give funds to certain groups that, according to the congressman, are “a bit tough to justify.” Out of a long list, the congressman specifically singled out two groups: the San Francisco Mime Troupe and the International Accordion Festival.

“Those kind of grants lend themselves to ridicule,” the Flake told Landesman during a House Appropriations subcommittee hearing.

Landesman held his own, saying that “the marketplace shouldn’t be the sole determinant of what is allowed to flourish.” He got help from Representative José Serrano (D-NY), who said Flake “will be getting hate mail from Polish folk musicians,” before adding that “even during difficult budget times, we have to protect, preserve and grow the arts.”

“Perhaps [Rep. Flake is] one of those people who think the accordion is too ‘working class’ to be celebrated,” said Catherine Ragland, this year’s festival curator, and a world authority on anything accordion-related. “If he had read the grant, he would have learned that the festival is not just about a bunch of people playing the accordion, drinking beer, and having a good time, though I don’t see anything wrong with that. The event is about promoting diversity, reaching out and across communities, and learning about different musical and cultural traditions around the world and within our own community.”

If you’ve never been to the festival, go to its website and see for yourself — these aren’t just party bands, but serious musicians who are masters in their genres.

Besides the Current’s picks (see sidebar), don’t miss Buille, a folk group that rarely plays in the U.S. In a country used to seeing Irish-American groups (nothing wrong with that), this is the real stuff.

“We are really very lucky to have them,” Ragland said. “This was quite a coup.” Buille has a distinctively Northern Irish style mixed with jazz and East European fusions, and it represent the festival goers’ only opportunity to hear and learn about the concertina, a free-reed type of small accordion.

This year’s cajun/zydeco representatives are among the best in the festival’s history: Grammy-nominated Pine Leaf Boys and Cedric Watson are young, contemporary artists who nevertheless understand and reach to the Creole and French roots of the genre. And the list goes on. La Villita is the place to be this weekend.

On a final note, Tejano music fans like to repeat there are Tejano fans all over the nation, especially in Arizona. If that is a fact (and it is a fact), when they find themselves at the polling booth they should remember who this guy Flake is — he’ll be running for the Senate. •