America Through a Funhouse Mirror 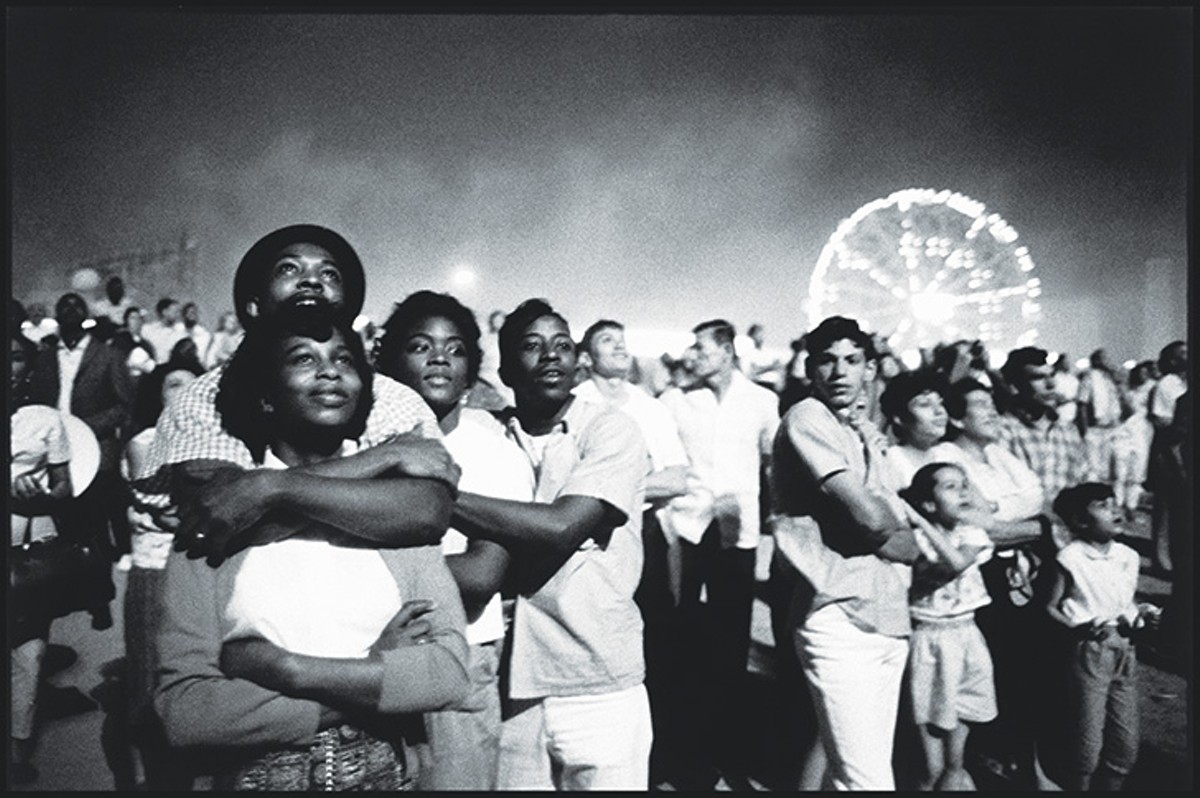 Entering through the giant mouth of a grinning man and confronted by posters for Quinto the Human Octopus and Jeanie the Living Half Girl, it's obvious "Coney Island: Visions of an American Dreamland, 1981-2008" isn't your standard, staid museum show. Mingling the gorgeous and grotesque — luminous 19th-century seascapes with clips from Hollywood movies and sideshow banners — this raucous, multimedia extravaganza on view through September 11 at the McNay Art Museum explores a joyous yet somewhat tawdry place in the country's imagination and yearning that author Henry Miller called the "Coney Island of the mind."

Organized by Connecticut's Wadsworth Atheneum Museum of Art in Hartford, "Coney Island" is almost like a time-traveling trip to the beach resort located on a spit of land south of Brooklyn, conjured with paintings, drawings, photographs, prints, posters, banners, architectural artifacts and original carved-wooden carousel animals.

While looking at Reginald Marsh's whirling women riders in Wooden Horses (1936), you can turn around and see actual painted-and-bejeweled carousel horses from the ride circa 1912-1917. Marsh's crowded, sweaty scenes of the beach and midway show what Coney Island looked like when it became a multicultural playground for the teeming masses during the Great Depression. Joseph Stella captures the energy and excitement of the electrified American dreamland in his chaotic, almost abstract early painting, Lights, Coney Island, Mardi Gras (1913-1914).

From the Edison Company's black-and-white 1905 Coney Island at Night to Alvy Singer's childhood home under the Coney Island roller coaster in Woody Allen's Annie Hall (1977), clips from numerous films trace the parallel development of movies and the amusement park as mass audience entertainment. But the innocent flirtations of Claudette Colbert and Ray Milland on the roller coaster in The Gilded Lily (1935) give way to the existential, drug-drenched despair of Darren Aronofsky's dark 2000 drama Requiem for a Dream, which is also the title for the exhibit's final section devoted to Coney Island's decline after World War II. 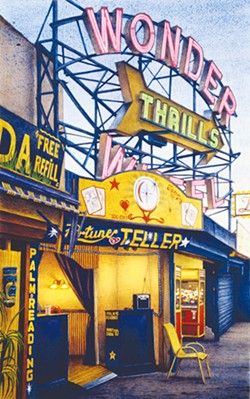 Samuel S. Carr's 1879 Beach Scene depicts the simple pleasures of early Coney Island, from a fashionable family posing stiffly for a tintype photographer to a nearby puppet show attended by a well-dressed African-American couple. Coney Island became a democratic destination that mashed together different social classes. In contrast to Carr's frozen figures, John Henry Twatchman and William Merritt Chase, who mentored San Antonio artist Julian Onderdonk, took an impressionistic approach, using dabs and swatches of paint to animate their beach scenes, such as Chase's lively At the Shore (1884), probably showing the attractions, including the large blue orb marking the Fortune Teller's Booth, near the Brighton Beach Hotel.

The exhibit follows the chronological development of the nation's archetypal beach resort from upper-crust watering hole in the 1820s to the country's most popular resort after the Civil War, especially with the opening of the nation's first rollercoaster there in 1884, which was soon followed by Steeplechase Park. Leo McKay's panorama (1903-1906) shows the park's many attractions, including riding on mechanical horses around an elevated track, cruising on canals in Venetian-style gondolas, taking a cyclorama trip to the green-cheese Moon and riding elephants.

Elephants, sadly, became a symbol of Coney Island's decadence. In 1885, James Lafferty built the Elephant Hotel, a 122-foot-tall replica of the animal that straddled the beach, which can be seen in a poster for Barnum and Bailey's traveling Coney Island Water Carnival. By the time the giant pachyderm burned down in 1896, it had become a brothel. Even more shocking is the fate of Topsy, an elephant condemned to be electrocuted, a wretched 1903 publicity stunt recorded by Edison that is shown in the gallery. 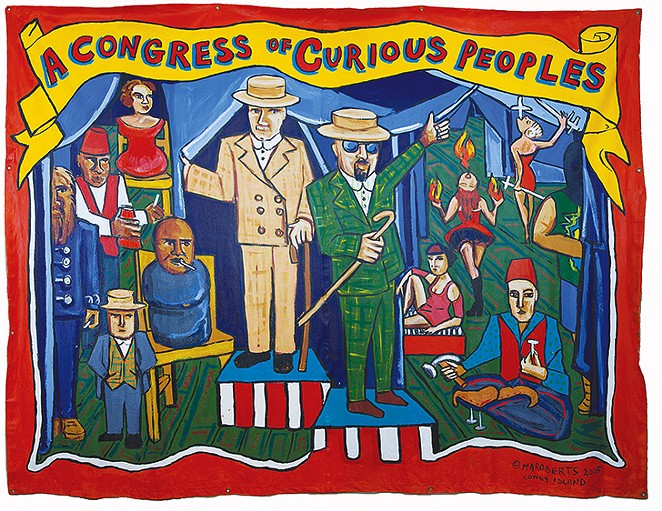 To balance the grim spectacle, British-American artist and animal-rights activist Sue Coe's accompanying 2007 video tells the story from the animal's point of view using circus poster imagery to show the elephant forced to leave Africa, imprisoned as a circus performer and convicted of murder despite acting in self-defense. Now after more than 100 years, Barnum and Bailey has finally announced it is doing away with its elephant acts.

Microcephaly, in the news because of the zika virus, is the cause of the condition that created "pinheads," among the crassly exploited people with medical conditions and congenital deformities who became popular sideshow attractions during the 1930s. Pip and Flip, actually Elvira and Jenny Snow, Georgia twins born with microcephaly, were among the stars of the Coney Island "freak" shows. Advertised on banners in one of the Marsh paintings, the twins can be seen in a clip from director Tod Browning's notorious 1932 film Freaks, which starred Coney Island's sideshow headliners, including the conjoined twins Daisy and Violent Hilton, who lived in San Antonio. The freaks of the past join the sword-swallowers and fire-eaters of the present in Marie Roberts' A Congress of Curious Peoples (2005).

For most people, the enduring image of Coney Island is Weegee's 1940 black-and-white photograph of a sea of people jammed together, Afternoon Crowd at Coney island, Brooklyn, which the multimedia pop artist Red Grooms has transformed into a colorful, three-dimensional shadowbox. Alternatively both "America's Playground" and "Sodom by the Sea," Coney Island ranges from the sublime to the sensational, mashing up people and dreams in the most surprising and often shocking ways.

You can check out more pieces from the McNay's Cone Island Exhibition here."