The Movement that Made Brokeback Mountain and Carol Possible

The Midnight In the Garden of Good and Evil masquerade party, which benefits the Fiesta Youth nonprofit organization, the host of San Antonio’s premier LGBT teen and young adult support groups, will take place Saturday, April 9.

Inspired by their cause, I have highlighted four films from the New Queer Cinema movement of the early 1990s, a cultural zeitgeist that provided queer-themed films seeking to humanize homosexuality and avoid gay stereotypes.

POISON • Todd Haynes, known for Oscar-bait films like Carol, directed Poison on a micro-budget that would make most filmmakers gasp in admiration. Inspired by the novels of Jean Genet, this 1991 flick interweaves three separate tales that showcase a bullied student who shoots his father, a scientist who synthesizes human sexuality and two prison lovers.

The most engaging narrative involves the aforementioned scientist whose elixir causes his flesh to decay. He kisses another woman and inadvertently transfers his disease, causing an outcry of public fear about this new contagion.

“The world is dying of panicky fright,” we are told, and this most definitely rang true in regards to the public’s attitudes toward gay men and the AIDS epidemic at the time. 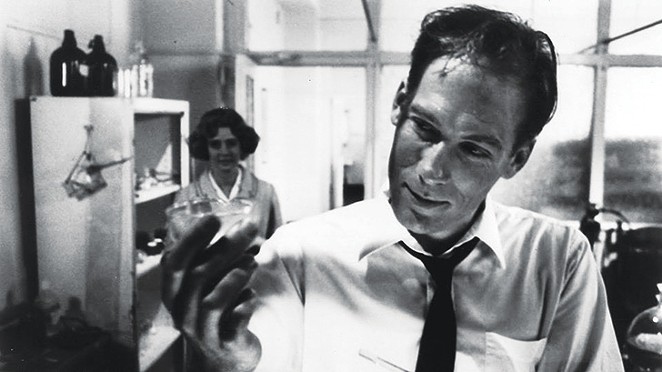 THE LIVING END • One of Gregg Araki’s (Doom Generation) early works, The Living End is riddled with the director’s trademark nihilistic attitude brought to life by graffiti slogans and disaffected one-liners, a style that borrows heavily from the French New Wave.

Our two gay characters set out on a road trip while coming to terms with their recent HIV-positive statuses. These characters aren’t the meek gay archetypes that had been previously embodied in films such as Longtime Companion. No, The Living End’s characters direct their inner anger outward toward their homophobic would-be oppressors in acts of violent aggression. Will the men’s lack of inhibition free them, or will it force a James Dean ending?

SWOON • This highly stylized 1992 film depicts the infamous Leopold and Loeb case, in which two men killed a teenager in 1924. What sets this movie apart from other Leopold and Loeb depictions is the director’s focus on the killers’ homosexuality. This is less of a true crime movie and more of a contemplation on how sexual manipulation caused an unthinkable crime.

Another travesty of this situation is how the two men were treated in court. They were referred to as engaging in “mouth perversions” and having unnatural lust. They were accused of sexually abusing their victim despite any physical evidence. Even the topic of homosexuality was deemed too disgusting for women in the courtroom to hear. Despite their guilt, the discrimination these men faced most certainly affected their sentences of life plus 99 years.

Two black British friends (one gay, one straight) struggle with the recent murder of their friend Terry, while at the same time operating a pirate radio station called Soul Patrol. Metrosexual Chris has dreams of becoming a mainstream radio DJ, while Caz is more interested in his new beau, a Socialist punk whose ideologies might get the best of him. Ultimately, Chris is framed for Terry’s death as he tries to uncover the true killer.

In some ways, Young Soul Rebels is Do The Right Thing for the gay set as it focuses on an ensemble cast in one London neighborhood. In other ways, the film resembles a mild thriller with killer POV shots ripped straight from a Dario Argento Giallo. Whatever box the viewer chooses to place Rebels in, one can’t help but appreciate the danger of being a gay black man when there are swastikas and National Front initials painted on every passing building.