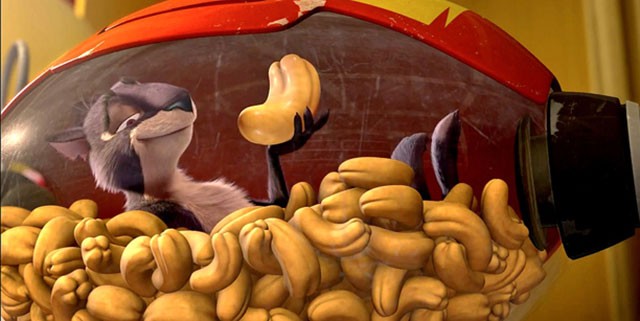 You’d hardly expect to find civics lessons in third-rate kids animation, but they are scattered about willy-nilly, like hastily buried acorns. Set in what appears to be a 1950s medium-sized American city, though with bits of contemporary dance music scattered on the soundtrack, The Nut Job contains chewed-up bits of PoliSci 101 curriculum that are every bit as random as the plotting, pacing and tepid joke selection.

In fictional Oakton lies a large city park that’s home to a sentient furry mammal city-state, ostensibly a collective, which is controlled by a fatherly benevolent dictator known only as “Raccoon” (voiced by Liam Neeson). Due to the inherent inefficiencies of autocratic central planning, the animals’ food reserves are dangerously low, with winter approaching. An elite task force is dispatched to address the crisis, led by dashing, alpha male squirrel Grayson (Brendan Fraser) and his plucky and highly capable lieutenant, Andie (Katherine Heigl). Their mission is to rob a hot nut vendor’s cart parked on the edge of the park, which, unbeknownst to our rodent friends, is being used as a cover by human crooks who are casing the bank across the street.

Complicating matters further is the arrival of fluffy-tailed scoundrel Surly (Will Arnett)—a renegade who refuses to work within the system and harbors objectivist notions that the fruits of his labor should belong solely to him—and his rat sidekick, imaginatively named Buddy (Robert Tinkler). Surly gets the jump on Andie, not only because he’s the best there is at what he does, but because the highly popular Grayson is actually a dim bulb, his heroic reputation mostly just a useful propaganda tool. As crafty as Surly is, however, he’s ignorant to the workings of the cart’s propane tank, ultimately leading to a fiery calamity that engulfs the tree containing the winter reserves. Maintaining the illusion of democracy, Raccoon calls for a quorum to expel Surly for his conduct, and the rogue is promptly banished. While exiled, our antihero luckily stumbles on an even bigger haul a few blocks away: the retail store that supplies the cart. On seeing the basement stock room, Surly exclaims, “It’s the lost city of Nutlantis!” a weak punch line that should indicate for you the standard of writing here.

Conveniently, the crew of human hoods is digging a tunnel from the nut shop to the bank, which our furball friends use to piggyback their own tunnel. Meanwhile, Raccoon at last reveals his true Stalinist agenda, coldly stating that the lack of winter reserves is intentional, as a hungry populace is easier to control.

The Nut Job is, of all things, a Korean-Canadian co-production, which may help explain the uninspired animation and the generally desperate and painfully flat tone, as well as an instantly dated appearance.

Maybe this will all work better in another language; certainly a foreign voice actor could do better than Brendan Fraser, who grinds the movie to a halt whenever his doltish character opens his toothy face. Of course, fart gags are universal, as is the sight of cartoon critters boogieing to dubstep or rap, a staple of the genre that needs to be retired immediately.

It could be easy to dismiss this as merely an 86-minute CGI babysitter, but the kids in the crowd I saw it with were just as bored as their parents by this uninspired muddle.

Opened January 17 at all Santikos locations except Bijou