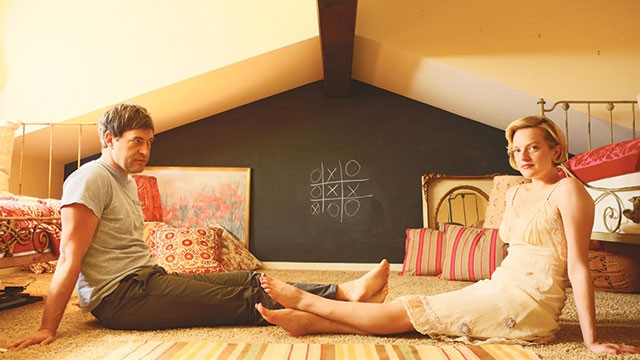 “What’s the safest way to talk about this without spoiling the movie?” actor Mark Duplass (Your Sister’s Sister) asks himself when an interviewer with the Seattle Post-Intelligencer poses a question to him about how he would personally handle the situation his character is facing in his new, bizarrely clever, dark indie rom-com The One I Love. Duplass’ vague, Socratic response to the question is proof that there really isn’t a way to have a meaningful conversation about the film (much less write a review) without dropping some major spoilers. Now, I’m not talking about ruining a critical twist in the climax of the movie like revealing that Bruce Willis is a ghost or that Gwyneth Paltrow’s pretty head is in the box (apologies to those of you who never saw The Sixth Sense or Se7en). Instead, the twist, which becomes the entire central idea behind The One I Love, happens fairly early in the film and is exactly what first-time feature director Charlie McDowell and first-time feature writer Justin Lader probably wouldn’t want you to know about until you were sitting comfortably in your movie theater seat (or on your couch at home since the film has been available On Demand for a few weeks) experiencing the strangeness of the narrative without any preconceived notions of what is to come. And therein lies the rub. How do you write about a movie that doesn’t lend itself to be written about? Simply put: you can’t—unless you want to offer up an assortment of hypothetical questions that don’t add up to much.

With all that said, don’t read past this paragraph if The One I Love is something you plan to see any time soon. Take the advice actor Colin Hanks tweeted after he saw the movie earlier this month: “Read nothing about it before you see it … then enjoy the hell out of it.” Then again, practicing self-control is rather difficult when something you know you shouldn’t be looking at is dangling right in front of you (just ask those Jennifer Lawrence nude photo gawkers that actually have a conscience but click the links anyway).

In The One I Love, Duplass and Elisabeth Moss (TV’s Mad Men) star as Ethan and Sophie, a couple on the brink of a divorce, who decide to take a vital step in fixing their marriage by going on a weekend retreat to “reset the reset button” and sort out all their differences as husband and wife. Their mini-vacation starts off normal enough (eating a nice dinner, playfully bantering, smoking a little weed), but when Ethan and Sophie begin to explore the isolated property on their own, things start getting very creepy (in a Rod Serling, Twilight Zone-esque kind of way, not a Stephen King, dead-twins-in-the-hallway kind of way). Shacked up in the guesthouse away from the couple’s main quarters are living, breathing ideal versions of themselves. A clearer way to explain what Ethan and Sophie discover might be to say they find in these doppelgängers what each of them wishes the other possessed in character traits so their relationship was more harmonious. For example, fake Sophie is a little less high-strung and projects a more confident, sexier vibe, while fake Ethan is more emotionally present and carefree.

The setup is intriguing as Lader lies down some ground rules, so things don’t get too complicated too soon, the most important being that the real Ethan and Sophie can only enter the guesthouse individually to spend time with their simulated significant others. It becomes a test of how much magic realism viewers can handle as the odd situations start to take place and McDowell and Lader invite everyone to jump on board. It’s much easier to play along in the first two acts, when Ethan and Sophie’s fantasies are manageable one-on-one encounters, but as soon as the story allows the foursome to occupy the same space is when The One I Love begins to unravel under its ambitious albeit directionless ideas. It’s almost as if Lader got to a point in the script and, not knowing where to go, jumped off a cliff and hoped for the best.

When The One I Love lands, what is left is a pair of convincing, double-duty performances from Duplass and Moss, who are able to isolate some of the small differences between each of their two characters by staying true to the genuineness of the real Ethan and Sophie and not falling into Stepford Wives territory with their counterfeit counterparts. It’s particularly true for Duplass, who brings the most humor to the film, especially when real Ethan starts getting jealous of fake Ethan as real Sophie becomes more smitten by him. An original a premise as you’ll likely see this year, The One I Love might not be able to close out as efficiently as it would’ve liked, but it does present some valuable themes about appreciating every aspect of a relationship no matter how flawed it is. It’s what Robin Williams in Good Will Hunting called “the good stuff you weren’t paying attention to.”