The Return of Virginia Woolf: AtticRep’s magnificent monster is back 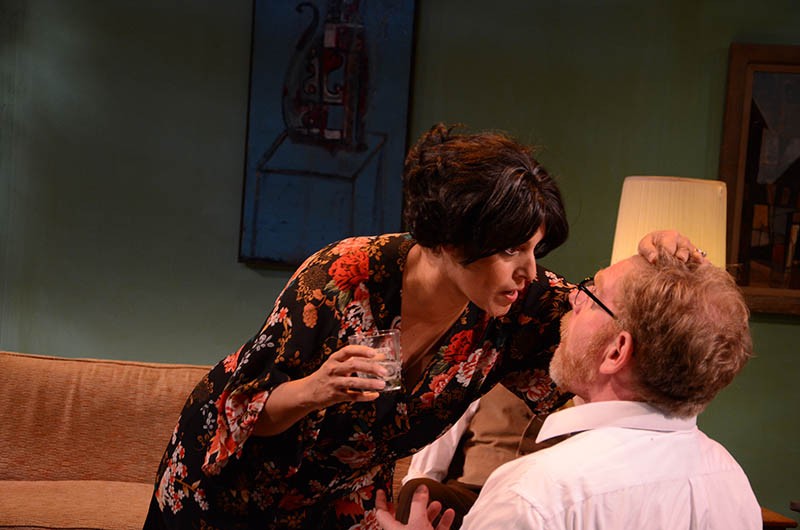 George and Martha have been waging conjugal combat in theaters throughout the world since Who's Afraid of Virginia Woolf? opened on Broadway 52 years ago. Within Edward Albee's sidesplitting, heartbreaking, soul-wrenching play, a 23-year marriage has congealed into a routine of nudges, winks and slugs. David Connelly and Gloria Sanchez-Molina, who last played the leads when AtticRep produced Virginia Woolf in 2012, seem to have inhabited George and Martha for two more tumultuous years. Sanchez-Molina's transformation into Martha is all the more remarkable since she had replaced a cast member who had to bow out three weeks before opening night two years ago.

When I reviewed that earlier production for the Current on August 21, 2012, I praised it as "glorious" and "uproarious." Its revival brings back three of the four original cast members. Sarah Nixon returns as Honey, the wholesome young faculty wife who is the perfect foil—and fool—for the depraved games played by middle-aged George and Martha. Coiffed in a flawless blond hairpiece, Tyler Keyes replaces Brad Adams as her husband Nick, the ambitious academic stud who was recently hired by Martha's father, president of the small New England college that is the site of George's "dashed hopes and good intentions." Keenly aware of his own failure to climb the career ladder, George, mired in mediocrity in the history department, observes: "There are easier things in this world than to be married to the daughter of the president of the university."

This revival is staged not at AtticRep's historic home, Trinity University, but in the new Tobin Center for the Performing Arts, where AtticRep serves as the inaugural resident troupe. The space in the Carlos Alvarez Studio Theater is more ample and adaptable than the old Attic Theater, the lighting more sophisticated and the seating more ample. The actors have responded with performances that are even more layered and seasoned with inventive stage business. Connelly begins the first act, whose disconnected banter is a reminder of Albee's roots in the Theater of the Absurd, by stumbling over the trousers he tries to remove.

The three acts are played out in real time—the wee morning hours following a faculty party. The audience shares with the characters an agonizing, brazen, bawdy and devastating ordeal that the actors in their new Tobin abode undergo five days a week. "There is quicksand here," George warns Nick, "and you'll be dragged down." There is also quick wit that sharpens the mind and elevates the spirit.