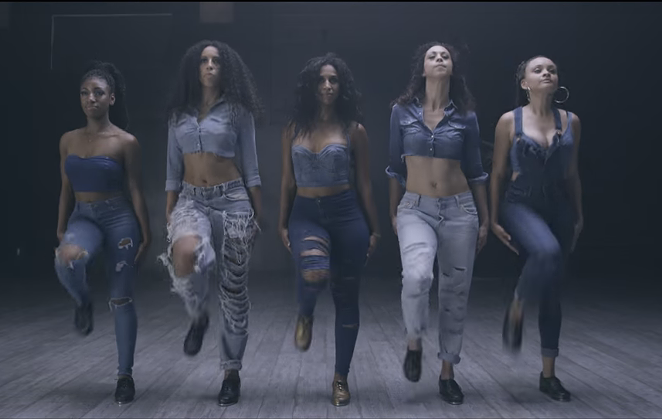 Youtube
The women of Syncopated Ladies getting in formation.
OK, so maybe she's not Illuminati ... Or, maybe, that's exactly what someone in the Illuminati would want you to think! Amiright?

Regardless, the recent single from Bey's forthcoming album (which is rumored to drop unexpectedly – some say as soon as April – just like the 2013 release BEYONCÉ) has inspired numerous viral dance videos. However, none have been approved by Queen B. in a Facebook post ... Until now!

The five women of Syncopated Ladies, an incredibly talented Washington D.C. tap dancing troupe, have released a video of their routine to "Formation," choreographed and produced by tap dancing sisters Chloe and Maud Arnold. In an interview with The Huffington Post, Maud stated:

“Beyoncé is so inspiring as a black woman because she’s extremely talented but beyond that she’s a business woman, she’s kind, she’s amazing, she’s everything you want to be ... She holds her sisters up, she inspires others, she loves being a black woman and she embraces it. And it’s really important for us to express that, too.” [sic]

In an effort to pay it forward, share the love, one love - Beyoncé – the women of Syncopated Ladies added on footage to the end of their routine of other troupes around the world getting "in formation." Enjoy.