Thomas J. Henry Flashes His Cash Yet Again — at a $4.5 Million B-Day Party 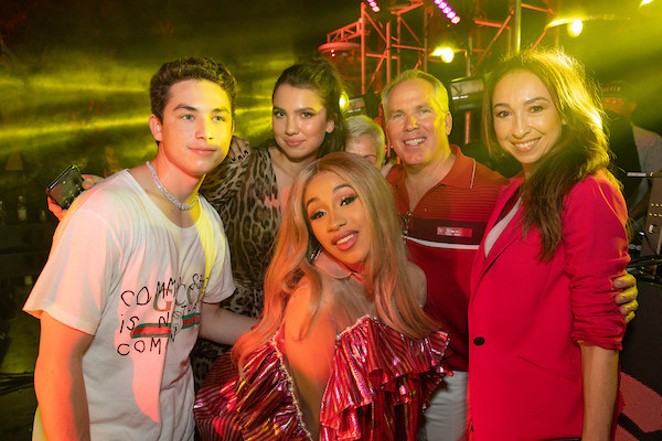 Photo Courtesy of AH/Hangin' with Los Henrys
Thomas J. Henry and brood demonstrating that with enough cash, it's possible to hang out with celebs like Cardi B.
Apparently, Thomas J. Henry hasn't yet tired of letting us know just how goddamn rich he is.

After launching a YouTube series called "Hangin' with Los Henrys" — the sole purpose of which seems to be showing off his family's ability to flash the green stuff — the San Antonio personal injury attorney is now bragging via news release that his 56th birthday party came with a $4.5 million price tag.

The soiree took place over the weekend in Miami Beach, required two months to plan and boasted performances from Austin Mahone, DJ Khaled Cardi B., according to the poop sheet, which modestly refers to clan as a "superstar family." The lawyer's handlers were even nice enough to let us know which James Beard Award-winning chef cooked for the 75 guests and which designers dad, mom and the two kids wore.

Big Daddy's fete comes on the heels of a $4 million birthday party he threw for his son and a $6 million quinceañera for his daughter.

If one took the cynical view, one might assume the attorney was buying Kardashian-style media exposure for his kiddos so they don't have to work for a living when they grow up. Hard to put it past a guy who once held a press conference in front of the Bexar County Courthouse to capitalize on the Sutherland Springs mass shooting as a way to shill for his firm.

As anyone who's tried to sit through a few episodes of La Familia Henry's YouTube show can attest, money can buy a lotta neat stuff. But talent and class don't appear to be among the spoils.