Behind the kitchen door with exciting young local chefs 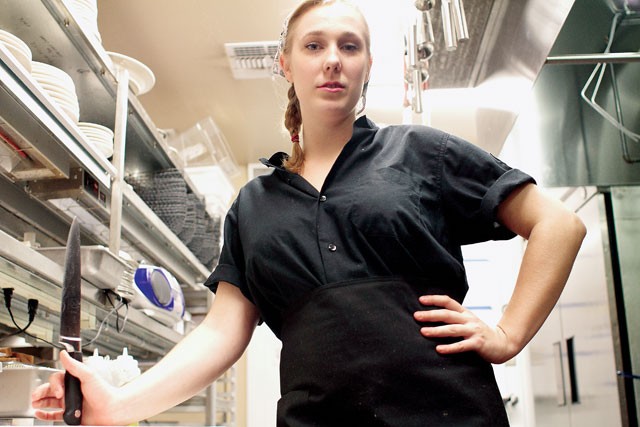 Like many children, Brooke Smith grew up wanting to escape her hometown. But, like many a child of San Antonio, she kept finding her way back home again and again.

Smith is the chef at the resurrected Esquire Tavern, the 80-year-old River Walk institution that’s about as San Antonio as it gets. And Smith’s wanderings have made her ready to build a better San Antonio, a task she’s been preparing for her whole life.

“I learned how to cook from my mother. She wouldn’t let any of her kids leave the house without knowing how to cook,” says Smith, who at 24, has already spent the bulk of her life in the kitchen. She found a mentor early on in restaurateur Mark Bliss of Silo Elevated Cuisine and the soon-to-open concept, Bliss. “He kinda took me under his wing to let me explore whether I liked cooking in a professional way. And if I did, I would pursue culinary school. I ended up loving it.”

After high school she quickly packed up for the New England Culinary Institute, where, with a spoon for a school mascot, she found her passion reinforced by skillful preparation. She’s since bounced around such notable kitchens as Portland’s Red Star Tavern, Austin’s Enoteca Vespaio, and SA’s Silo and La Frite. More recently, she slipped the noose to land a restaurant gig in that vagabond’s cove, the Virgin Islands.

When she returned to town in September 2010, she talked with architect Chris Hill, who was hoping to breathe new life into The Esquire Tavern and its hundred feet of wooden bar. “His main thing was Texas, Texas, Texas,” she says. A menu of sirloin cheeseburgers, hangar steak sandwiches, and fried pickles attests to that. “We have a lot of spice in all of our food. The Big Red short rib empanada that we serve on the weekends is a San Antonio hangover cure.” She’s found her own kitchen, and other things to love. “There’s all these little things popping up, they’re all local businesses, and I think it’s great. I think that San Antonio is under-appreciated, but we’ll catch up to where everybody else is at.”

She says maybe she’d like to open a little 12-top, an “open kitchen with a bar where you can sit around and watch people cook.” Ah, finally she’s settled. “But you know what, I’ve gone from treehouse restaurants to boats that travel all around the world and pick up produce port-to-port and sell their food to pirates,” she says. “I’ve had so many wild ideas, it’ll change next year.” — Brandon R. Reynolds