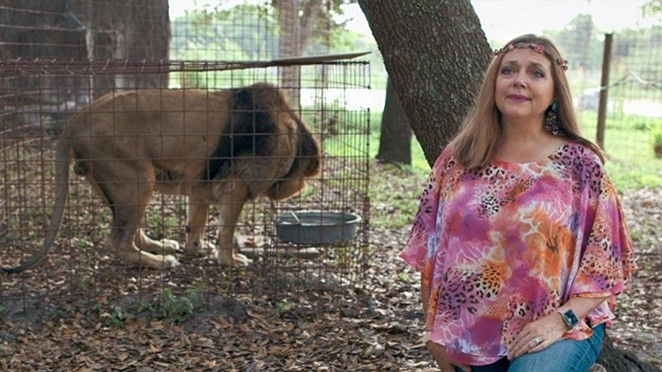 Netflix
Tiger King's Carole Baskin, a San Antonio native, isn’t happy with the way she's being portrayed in Hollywood since the Netflix documentary raised her profile.

During the newest episode of The Pet Show podcast, Baskin says she “could just slap” Chloe Fineman over the comedian's impression of her on Saturday Night Live.

In the SNL skit, which aired in April, Fineman’s Baskin was featured in a parody of online educational platform MasterClass, in which Baskin teaches students how to ride a bicycle.

“Hey, all you cats and kittens; come bike with me,” Fineman’s Baskin says before she raps about how she didn’t kill her husband Don Lewis, who mysteriously disappeared in 1997.

If Baskin has a problem with an SNL sketch, she’s likely going to roar over an upcoming NBC series based on eccentric Tiger King subject Joe Exotic. On the show, Baskin will be played by SNL star Kate McKinnon.

“I really hope that she does [reach out] before she gets too far down the line with it,” Baskin said on the podcast. “I’d love to know what her take is on it and what she’s thinking to do, and see if there was any way we could advise her.”

In March, Baskin provided Entertainment Weekly with a statement about the NBC show.

“Big Cat Rescue implores Kate McKinnon to not use real big cats and cubs in the making of her series,” she said.

Earlier this month, Baskin also criticized Cardi B and Megan Thee Stallion for using big cats in their “WAP” music video because it “glamorized” owning tigers.

A second TV miniseries based on the Tiger King saga is also being produced by CBS and has Oscar winner Nicolas Cage set to play Exotic. The role of Baskin hasn't yet been cast.

We’re on board with Baskin. Leave the real tigers alone. Filmmaker Ang Lee made Life of Pi with an incredible looking CGI tiger, so it’s doable. But whatever you do, don’t go all Cats on us.