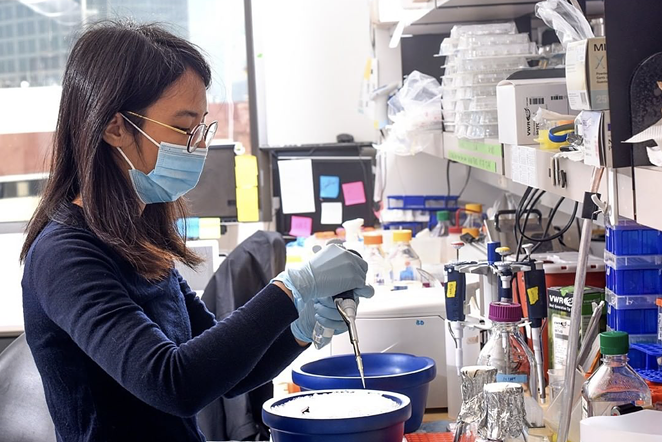 Instagram / bcmhouston
Scientists at the Baylor College of Medicine hope to fund the mass production a patent-free COVID-19 vaccine.
Two Texas scientists are pleading with the federal government to help them fund mass production of Corbevax, an open-source, patent-free vaccine they hope can slow the spread of COVID-19 variants in low-income countries.

But, so far, their efforts have received more funding from the philanthropic arm of Austin-based Tito’s Vodka than they have from the U.S. government, Vice reports.

Dr. Peter Hotez and Dr. Maria Elena Bottazzi — professors at the Baylor College of Medicine and co-directors of the Texas Children’s Center for Vaccine Development — have successfully developed a patent-free vaccine, aiming to provide a “vaccine for all,” especially to underdeveloped communities around the globe.

But the doctors told Vice their effort still hasn’t received any funding from the world’s richest countries, including the U.S., despite warnings from virologists that new variants like Omicron are more likely to emerge in countries where vaccines aren’t widely available.

“The US government could, tomorrow, agree to make 4 billion doses of our vaccine,” Hotez told the news site. “There is still no roadmap to vaccinating the world. We're doing what we can, but we could do much more if we had help from G7.”

Since the doctors weren’t getting financial help from the world’s richest countries, Tito’s stepped in. In May of 2020, the philanthropic arm of the Texas-based booze maker, Love, Tito's, donated $1 million to the effort.

To date, that's more than the Houston physicians’ efforts have received from the federal government.

“Everything we do at Tito’s is rooted in giving back to the communities we serve, and this pandemic is no exception,” Tito's Director of Global Impact and Research Sarah Everett said in a release announcing the donation. “We’re proud to support Dr. Hotez, Dr. Bottazzi and their team’s work to improve humanity’s odds of success against COVID-19 and future coronavirus mutations.”

Vice reports that recent studies have shown the public’s distrust in large pharmaceutical companies has contributed to vaccine hesitancy.

Hotez and Bottazzi told the news site their open-source, not-for-profit inoculations could help assuage people that their shot is intended to improve their health rather than just drive Big Pharma profits.

“The mission of our vaccine center, which has been in operation for more than two decades, has always aspired to be open-source,” Bottazzi said. "Vaccines, at the end of the day, should be a commodity accessible to all.”