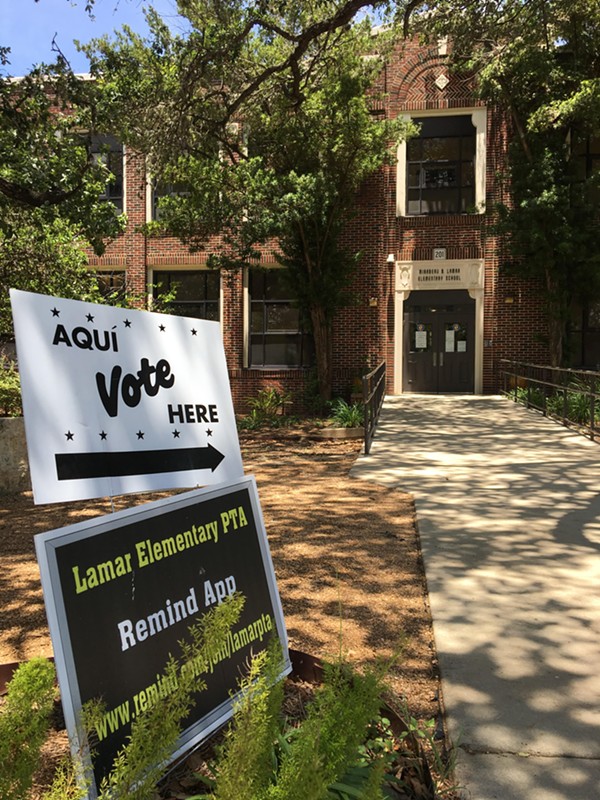 Megan Rodriguez
Lamar Elementary School is one of hundreds of voting sites across Bexar County for Tuesday's Democrat and Republican primary runoff elections.
Despite predictions of higher voter turnout in today's party primary runoffs, three of the polling sites we visited around San Antonio weren't exactly abuzz with voting.

Last week, Bexar County Elections Administrator Jacquelyn Callanen said she was hoping Bexar County would see 30,000 voters on election day, surpassing the 2014 midterm elections by 12,000 votes. Callanen was hopeful because voter registration numbers have increased since the last election.  There are currently 1,049,400 registered voters according to the county's elections department.

But only a small fraction of those voters appear to be turning up at poll sites today.

“Voter turnout is not as high as we would hope,” said Candice Washington, a canvasser for FieldWorks, which is promoting the Working Texans for Paid Sick Leave campaign. She arrived at the San Antonio Central Library before the polling location inside opened at 7 a.m.

“We could really use more voters," she said. "It seems like it’s mostly older people – and a lot of younger people I’ve met don’t vote.”

On the East Side at Smith Elementary School, Paxton Batchelder was also promoting the Working Texans for Paid Sick Time campaign. After canvassing for almost seven hours, Batchelder said she'd counted only seven people who'd come by to vote.

“I just think people feel detached from (the political process)," Batchelder said, "but I think we need to make people realize that this is how it is set up and this is how to participate – so you should participate.”


San Antonio resident Ralph Holloway voted at Lamar Elementary School on San Antonio’s Northeast side. Holloway said he rarely misses a chance to vote because he believes participation is important.

“Voting is a necessary thing if we want to live in a free country,” Holloway said. “It’s a civic duty, and that’s the reason I voted.”

Lorie Campos also voted at Lamar Elementary. Campos said she just got back to town from a family vacation and, despite her exhaustion, wanted to take advantage of the opportunity to cast a ballot today.

“This is how our society operates so everybody needs to vote,” said Campos, standing with her husband and their young son. She said she tries to promote the importance of voting with her elementary school-age child.

“We talk about politics with him to some extent,” Campos said. “He’s young but we try to start that discussion on the importance of being politically active, even at the school level, early on. If you see something you don’t like, speak up and try to change it."

Registered voters have the opportunity to cast ballots at hundreds of locations across Bexar County until 7 p.m. today.