Send a News Tip
Do you judge an issue by its cover? Weeklies across the country have a tradition of cover designs that are graphic, cheeky, provocative and super creative.  Arts Director Eli Miller strives for cover designs with a clear concept, visual hierarchy, and attention to detail. She despises clutter and rushed type selection. She shuns the idea of ceding the concept in favor of design. Miller takes the audience into account and weighs the appropriate mood as well. And, she always works to make sure the covers show more than they tell. Here are our top 10 choice covers for 2013.
click to enlarge

Art by Zaafra It was a cover unlike anything ever done by the Current. It features an original pencil drawing by Zaafra, the ultimate flamenco painter in Granada. I'm fond of it, too, because the story itself is so close to my heart.  — Enrique Lopetegui, music and film editor
click to enlarge

This one makes me laugh, and I don’t usually laugh at poop jokes. I also like the film poster aesthetic, the movement and pop of color. — Joy-Marie Scott, digital content editor 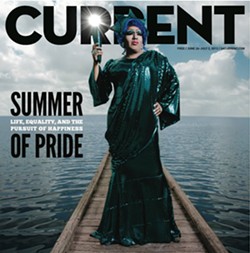 I just love the effort put on by Josh Huskin, who always delivers amazing stuff. It was simple but beautifully done. — Enrique Lopetegui, music and film editor

I think we captured a moment here, and I'm a diehard fan of our cover model, Tencha La Jefa, for life! — Callie Enlow, editor in chief

I love all the visual parallels between the elements. — Bryan Rindfuss, associate editor

It features a striking, illustrated photo of Senator Wendy Davis soaked in blue. It evokes the tough road that lies ahead for Texas Dems. — Mary Tuma, staff writer 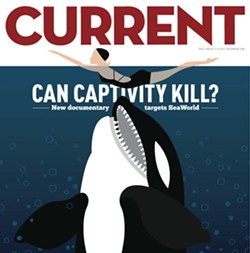 When this issue came out, my first thought was: Wow, I want that framed! With its art deco sensibility, the picture is showy, graceful, and sinister. It works on many levels to evoke the undertones of the SeaWorld story. — Joy-Marie Scott, digital content editor

It’s clean and simple. The unwavering flag amid the darkness picks up the tone of the debate very well. — Mary Tuma, staff writer 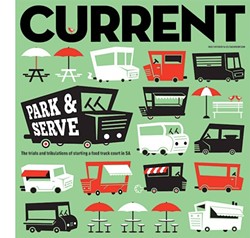 The detail Eli placed on this cover is awe-inspiring. I don't know of anyone that would willingly design 15+ tiny food trucks for a cover. — Jessica Elizarraras, food and nightlife editor 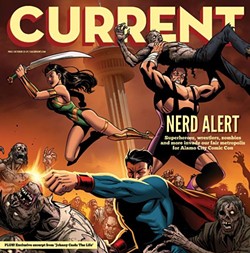 Superheroes, zombies, the Tower of the Americas... I was ecstatic when this illustration came together. — Callie Enlow, editor in chief