Top 4 SA Films of the Year: The Film Editor’s Picks 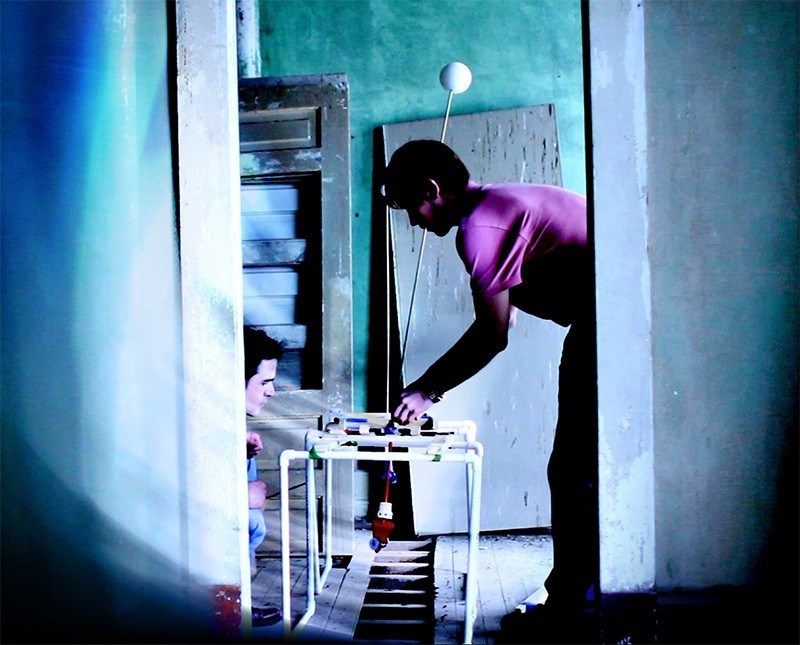 A still from Travis Lippert's 'Ghocial.'

For the biggest-hyped SA films of the year, 2013 saw an overabundance of sex, drugs and guns, and my feeling about the whole thing is best summarized by something Callie Khouri  (screenwriter of Thelma & Louise) told me in October.

“I think guns and sex are the two areas where people are least likely to apply intelligence,” she said. “Both things seem to come out of a place far less intellectual than you would hope.”

While the decently acted Line of Duty (fka Mission Park, it was released on DVD and VOD by Lionsgate) and Sanitarium (also released by Lionsgate on both DVD and Blu-ray) deserve my full respect for looking and sounding professional and both took off on some level, they’re the type of commercial, straight-to-DVD projects I’m not too interested in. What SA needs now is a critically acclaimed movie that can enjoy a good theatrical run all over the country, not just in select markets; we need someone who can push the envelope and surprise us (not necessarily with guns and tits and drugs), somebody interested in making a few bucks, yes, but who is also interested in film as art, not just as a form of popcorn entertainment; we need  an auteur who won’t feel validated whenever some Juan de la Chingada writes a positive review of his/her film.

So I went through as many local films as I could during 2013, and last night I treated myself with an often painful all-nighter of the best—and worst—the local film scene had to offer.

So here’s my verdict: my personal favorite four SA films of 2013.

Special Mention: Circus of the Self (Kavi Karnapura Das)

I’m not at all into faith-based movies, but this is the craziest, trippiest SA film of the year (I wouldn't be surprised if anyone out there chose it as one of the worst films of the year—it is so nuts, that it is good). The film was put together by the local Hare Krishnas and features Karnapur as the magician, Bryan Hamilton as the clown (he also wrote the music) and has the wonderful local artist Adriana García behind the camera. It is an experimental silent movie mainly dealing with what the Bhagavad-gita calls “the modes of material nature” and how the soul is stronger than both the mind and the intelligence. Not for all tastes, but before the whole thing is spoiled by a turn-off ending equivalent of a “Praise the Lord” plea, the movie goes to places seldom explored in local film. If you can get a DVD copy and are in the mood for an Ed Wood-meets-Alejandro Jodorowsky visual bombardment coming from beyond, this might be the movie for you.

Go to the next page to see my third favorite local film of the year.

If you liked 2012’s Other People’s Trash, you may want to check out A Clean Slate, the latest by the Chris Haley/Nina Durán team. This character study was released online on December 29 and left me wanting more from these guys. Like, a feature film.

“Is this a New Year's Eve prank, Enrique?” said Durán when I told her I’d include her film on my year’s end list. “[Chris] will be floored when he finds out!”

Working with no script, Haley shot the whole film in one night at his parents’ house.

“His sister Olivia and I improvised the entire thing,” said Durán, the editor of La Prensa newspaper and a natural in front of the camera.

“I love to write,” she said. “I will always be a writer first. But I do enjoy the camera. It's much easier for me without a script, though. I love having an idea of a character and running with it. We'll have a timeline of sorts, the story in our heads and then we just act in the moment... Seems to work... most times!”

The Haley/Durán team seems to personify that thing about intelligent people having doubts while the mediocre ones are full of certainties.

“We are both crazy, passionate people,” she said. “We have a hard time focusing and choosing which idea to run with, but I think all ‘creatives’ have that problem. It really is all about telling a great story. We love to move people, to make them feel. And if there's one thing we all know is that everyone has a story to tell.”

“We've been chatting about a feature-length for a while now,” she said. “We have a few ideas in mind. Nothing solid yet. We both want to make sure that whatever story we choose to tell is worth telling. If there's anything that we can all relate to is struggling, mistakes, falling and getting up again... to just fall again. But that's the beauty of life. Learning, living, enduring adversity. I think we can tell that story.”

Durán was right about what would be Haley’s reaction.

“I’m floored!” he said. “[A Clean Slate] was made with no crew, no light kit, no budget. The film also uses real life elements. The characters in the short just so happen to have the same relationships in real life (the boyfriend, the girlfriend, the little sister). Also, the flashbacks in the short are real footage that the couple captured on their cell phones in the past three years of their relationship. On the day of the shoot, there was an outline for the story, but the dialogue and performances are completely improvised. [Durán] navigates a subject matter very close to home. Her kids that she speaks about are real, as is her failed marriage. She was vulnerable and honest with her performance.”

Go to the next page to see my second favorite local film of the year.

” I thought when I started watching Ghocial. “Another Paranormal Activity-type nonsense.” I was wrong.

Shown at the SA Film Festival this year, this is not your usual ghost story. The two radically different characters believe in ghosts but one is extra curious and naive (Max Walsdorf), while the other (Lippert) is extra cynical and has no time for b.s. I loved the look, the pacing, the atmosphere and the acting, filled with overlapping dialogue so natural that at times seemed improvised. I told Current film critic Kiko Martínez to take a look at it, and I’m glad he saw my point.

“Not bad. Is it local?” Kiko asked. You bet. “Found footage stuff is usually pretty cliché, but I like that they took a more minimalist take on it instead of trying to stuff a bunch of horror crap into a nine-minute movie.”

But let Lippert—who also wrote, performed and recorded the film’s music—tell us the story of the film.

“I am in charge of digital marketing at my company,” said Lippert, who works for Mission Pharmacal. “My new intern Max was interested in film, so I decided that I would show him what I do for a living by making a YouTube video. My goal was to create content that people would watch and share, and place our products in it. I chose ghost hunting as the subject based on research into what was popular on YouTube. GDC was the ad agency at the time for one of our products. Their building was formerly the Savoy Hotel/boarding house/brothel. It was rumored to be haunted, and had actually been investigated by the Discovery Channel show, Ghost Lab. That was a perfect backstory, so ghosts it was.

Although I didn't actually expect to catch a ghost on film, I did think I could invent a ‘ghost detector’ that would look good on camera and make it sensitive enough to throw false positives. I failed, and ended up having to design and build three more detectors.

At some point, I realized that we weren't going to get anything interesting enough to succeed on YouTube. We did have a lot of good footage, though, so I decided to scrap the whole ‘reality’ thing and just make a short film. I wrote a screenplay based on Max's footage and then we acted out the rest of the scenes that I needed to make a proper, three-act story.

Some people—primarily YouTube viewers, but some in real life, too—don’t believe me when I tell them this is a work of fiction. I explain it like this: The first time the raccoons wrecked our detectors, we weren't filming. We didn't know what happened until we found a raccoon paw print in the dust a few rooms away. So we set up a sting operation, and a few days later, the raccoons came back. I rewrote the screenplay as necessary to take advantage of that footage.

Shortly after I put Ghocial on YouTube, a producer called me and asked if I wanted to be a character on his paranormal TV show. I had to turn that down, but we later agreed to make a feature. I spent about 18 months on the screenplay [Lightinging, based on Ghocial; no, there’s no typo]. It was a quarter-finalist in the Final Draft Big Break Contest this year.  We are now in the early stages of making a low-budget, indie movie. I am currently scouting locations here in San Antonio and looking to cast talented local actors in some really, really good roles—everything except the male lead, which I will play.”

Though originally screened at the McNay on October 4, 2012, this film had its festival run in 2013 as part of the Texas Film Commission’s 2013 Filmmaker’s Showcase.

And this is it for me, it's all there—an amazing (true) story that honors both John's memory and the art and humanity of his friend Vincent. Just looking at John's eyes (and the fact that the Walleys understood that's where it's at) is one of those great moments in SA art and film. The Walleys said a lot in less than 12 minutes, and everytime I watch I see more magic. Thanks, guys.

Next for them: the completion of Tía Chuck, a documentary on the late Chuck Ramírez, due for completion sometime in the summer, according to Angela Walley.