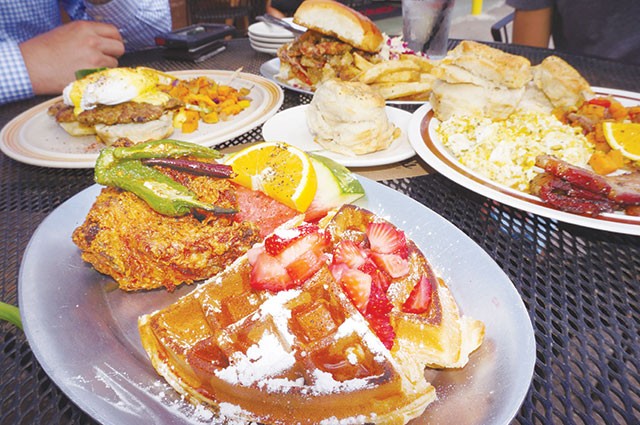 The Travels with Frenchie power trio returns again to further traverse the local hinterland in search of interesting dining experiences. As always, the culinary vice squad included Fabien Jacob, aka Frenchie (a Certified Sommelier from the Court of Master of Sommeliers), Carlos Montoya (an award-winning, evidence-based bicycle mechanic and gourmand of grilled meats) and myself, chronicling the adventures.

This time we headed slightly east of Downtown on Houston to Tucker’s Kozy Korner for their Sunday morning Gospel Brunch. For some historical reference, Tucker’s has been around since the 1940s and at one point was considered the longest running African-American bar in Texas. Ownership has changed occasionally over the years and for the last few months, Tucker’s has been under the ownership of Chris Cullum, known for his popular Attaboy Burger food truck, which had a longtime residency in Tucker’s kitchen as well.

But for further perspective, Carlos reminded me that this isn’t the first time we have reviewed Tucker’s. Around five years ago, when under different ownership, we checked out their unusual outdoor barbecue setup where people were invited to bring their own meat to grill. Frenchie brought a whole rabbit, but that’s another story, literally.

Carlos and I discussed the inherent challenges in taking over an establishment with a specific identity already intact. In contrast to the changes at the new Tacoland, at Tucker’s, Cullum is making small adjustments rather than a large-scale reinvention. I didn’t notice any major physical changes, though I’m not trained as a building inspector. More than anything, the changes look to be a reinvigoration, in a way that’s reminiscent of when the Rolling Stones recaptured their relevancy with the release of the album Some Girls in 1978—but maybe that’s just me.

As for the menu, there is an emphasis on “Southern soul.” Keep in mind, in the recent past, having a menu wasn’t really an emphasis to begin with. Yes, serving food has always been in the mix at Tucker’s on and off through the years, but relatively recently this was more of a bar than a restaurant. With Cullum aboard, he is making Tucker’s feel like not just a bar, but a restaurant and a nightclub as well. In addition to the Sunday brunch, they also have two free live jazz nights, with Monday hosting his father’s group, the legendary Jim Cullum Jazz Band, for a regular 7 p.m. performance.

And since this is supposedly a food review, let’s talk about the brunch. The options may not be abundant, but the plates they do offer definitely pack a punch. Make sure to try the fried chicken and waffles. Not enough can be said about the chicken side of the equation. We reviewed Chatman’s Chicken on the far East Side years ago in our search for great fried chicken, but we all enjoyed Tucker’s recipe much more, which is high praise. If you come for dinner instead, you will find that chicken wings—reminiscent of drumsticks, in a good way—are the foundation of the menu.

Frenchie used superlatives in at least two languages when describing the eggs Benedict. Visually, they were works of art, cooked to perfection as Frenchie explained. The eggs were served over a savory sausage patty on top of a biscuit, and proved very satisfying to our group.

Carlos tried the ham and eggs. The ham looked more like an incredibly thick slab of bacon, which offended no one. The eggs were scrambled and accompanied with a side of sweet potato hash with onions and a dash of pepper. Carlos often eats portions fit for a Viking and enjoyed two, perhaps three plates of breakfast before rushing off to work. The rest of the group, as well as the other patrons, made semi-permanent roots while enjoying the bacchanalian Bloody Mary bar.

As a stranger to other Sunday morning “bottomless” Bloody Mary offerings around town, evidently Tucker’s is one of the few places that actually keeps them flowing if you so desire. Moreover, you can dress up your Bloody inside at the bar with a huge variety of options from vegetables and peppers to sardines and other aquatic life. I was more intrigued by the bartender’s artisanal re-imagining of “purple drank” with whiskey, grape soda and muddled berries.

The brunch ended with Frenchie quizzing us on the secret ingredient Cullum uses for his French fries. Through his culinary forensics, Frenchie has discovered the secret that makes the fries mysterious and popular, but he wouldn’t tell me.

What is old is new again at Tucker’s. Fusing excellent music, food and drink, the Kozy Korner looks to have a bright future under the stewardship of Cullum.