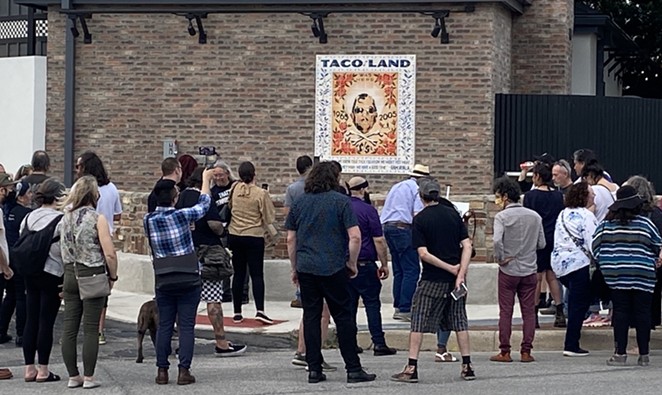 Artist Mig Kokinda created the mosaic bearing the likeliness of Ayala, who was slain, along with doorman "Gypsy Doug" Morgan during a 2005 robbery. The club's Pearl-area site was recently redeveloped into a restaurant by the Dallas-based chain Velvet Taco.

During the gathering, organizers also showed off a replica of a metal plaque detailing Taco Land's history that will soon hang on a wall that's one of the last vestiges of the original venue. Designed by artist Robert Tatum, the plaque includes an image of Ayala by tattooist Terry Brown.

Solloa, along with Saustex Records owner Jeff Smith and former Sala Diaz director Anjali Gupta worked to urge Velvet Taco to include locally sourced tributes to Ayala and the club at the site.

For nearly a quarter century, Taco Land offered a stage for local and regional bands too raw or odd to play elsewhere. Despite a lack of amenities like a green room or even a professional sound system, it also played host to touring acts ranging from GWAR to Yo La Tengo.

Smith, who booked the first punk show at the venue in the early '80s, credited Ayala for opening his business to creators of uncompromising music. The bar owner stuck with the bands even when clientele from the once rough-and-tumble neighborhood pushed back.

"What he provided us was a safe place for outsider music," Smith said. "It remained so up until his death. I was here the night before his murder hanging up posters."

Sanford Nowlin
Bell Solloa (left) and Jeff Smith (right) show off a replica of the metal plaque that will hang at Velvet Taco.