Trump's Swing Through Texas Could Get Super Awkward 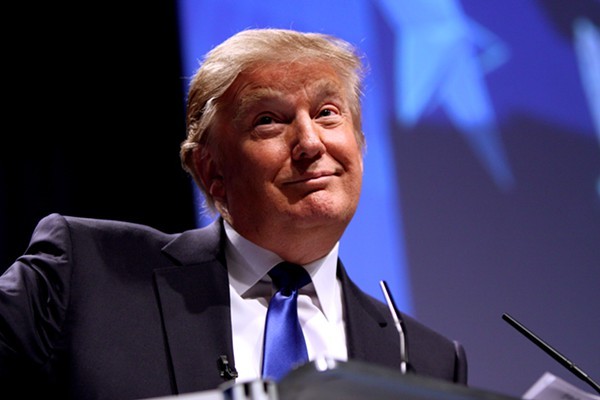 wikimedia commons
News that Donald Trump would swing through Texas next week hit like thunderbolt in San Antonio, where the presumptive Republican nominee who jump-started his presidential bid by calling Mexicans “rapists” will make his first campaign visit.

The immediate and overwhelmingly negative reaction to Trump’s visit here, reportedly planned for June 17, might have to do with the fact that he’ll be trolling for campaign cash in a state where even top Republican officials have tried to avoid endorsing him by name. Trump will visit a city with a lot of Hispanic judges even as he fights to disqualify a judge presiding over a lawsuit against his defunct real estate training scheme (which, according to a Texas Attorney General’s Office investigation, engaged in “false, misleading and deceptive practices” in Texas) on the basis of that judge’s Mexican-American heritage. And he’ll be stopping in San Antonio, according to the Dallas Morning News, just as the state's Democrats converge here for their 2016 convention.

Within hours of the announcement, thousands of people joined a Facebook group vowing to protest the candidate’s arrival in San Antonio. Ricardo Briones, a local attorney who represented some of the DREAMers and immigration activists arrested in 2010 for staging a sit-in at former Sen. Kay Bailey Hutchison’s San Antonio office, quickly offered free legal help to the protesters. Some openly cautioned activists to avoid the kind of violent confrontations that have plagued other Trump events across the country. Pro-Trump supporters flooded the page and bickering between sides soon ensued, highlighting Trump's uncanny ability to bring out the worst in people.

While the details of Trump’s trip to San Antonio remain murky (local and national GOP officials have been mum), the Dallas-based vice chairman of Trump’s fundraising arm with the national Republican Party told the News yesterday that he anticipates the three-city tour will net several million dollars for the campaign.

Whether it'll be enough money to make up for all the acrimony Trump's San Antonio stop could create is a whole other matter. “There are a lot of people who don’t like Trump on both sides of the aisle here,” said Manuel Medina, Bexar County Democratic Party Chairman. Medina points out that Ted Cruz trounced Trump in the Texas GOP primary earlier this year and says the most revealing thing about Trump’s stop in San Antonio could be which, if any, local conservative officials openly lend their support. "What local Republicans are going to stand by him and his hate speech? That’s what we’ll be looking for,” Medina told us.

And that's not withstanding the heated battle between Republican incumbent Will Hurd and challenger Pete Gallego over Texas' 23rd Congressional District, which is pretty much the only competitive congressional district in the state this election (thanks gerrymandering). Democrats certainly think Trump's stomping around the state will be a liability for Hurd, who's tried to distance himself from the kind of rhetoric coming out of the Trump campaign that could very well tank a Republican's chances in the sprawling South Texas district. Medina referenced the Hurd/Gallego race when he said, "You know, the best organizing tool South Texas Democrats have right now is Donald Trump."