Two Men, a Dog, a Van and a Baby: A San Antonio Couple’s Trans Pregnancy Journey 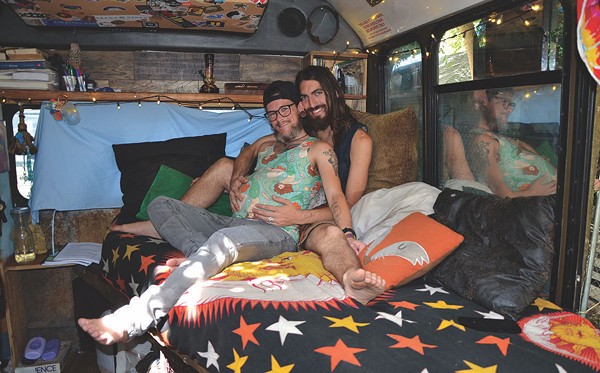 Bryan Rindfuss
Stephan Gaeth sings, “Two gay men and one bus travelling around the country with a baby and a doggo! Ba-bum, ba-bum, yeah!”

This is how Gaeth, 27, sums up his future with fiancé Wyley Simpson, 27.

He belts out their theme song so casually because, to him and Wyley, it really is that simple. To most outside observers, however, their story is quite rare: Wyley is a pregnant trans man, and Stephan and Wyley will both be biological parents to their son, Rowan Fox. They are also tiny-home dwelling, vegan, artist-travelers and plan to raise their baby on the road.

Children of their generation, their love story began on the dating app Grindr. About 20 dates later, Stephan, a yoga and dance teacher, and Wyley, a veterinary technician, made it official and became a couple. Not long after, the Winnebago Stephan called home caught fire. The loss was a shock, but it proved to be a blessing in disguise.

“It burned down and gave us room to be together. The fire pushed all this junk out of the way and made space for us,” Stephan says.

The couple soon moved into a short shuttle bus along with their dog, Cyrus. They were on track to becoming a tiny-home-dwelling pair of travelers when Wyley started experiencing morning sickness.

He initially chalked it up to his body finally rejecting cigarettes after years of smoking, but the morning sickness persisted even after kicking the habit. Neither the Pride Clinic for the LGBTQ-plus community nor the couple’s OBGYN could offer any explanation for it, but after five pregnancy tests, it was confirmed that despite having been on testosterone for six years, Wyley was pregnant.

The thought of going through with a biological process that would transform his body into something he had been working so hard to distance himself from was terrifying. “I’d been transitioning for six years, and I’d have to stop taking testosterone, for one. Two, I had come to a point where I was okay with my body, and I didn’t want to regress. Pregnancy is considered a feminine thing to do. It was something I was trying to get away from.”

Unsure of what to do, he contemplated abortion and adoption with Stephan in full support of whichever choice he made. But when an ultrasound revealed arms, legs and a heartbeat, Wyley realized his choice was to become a father, something he’d always wanted. And so the couple officially embarked on a pregnancy journey that most people never consider.

Both the Pride Clinic and the couple’s OBGYN admitted that Wyley was their first pregnant man.
click to enlarge 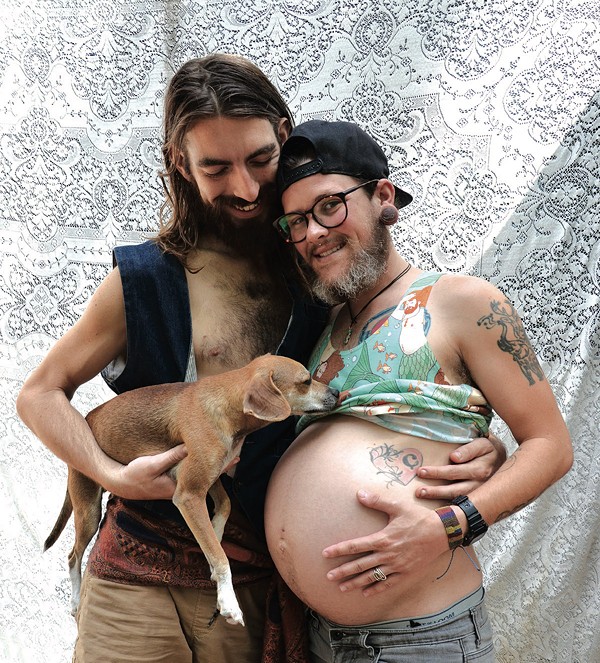 Bryan Rindfuss
“There are no resources. I had no one to go to. I had to figure out everything on my own. There are online groups, but nothing physical,” Wyley says.

Facebook groups were crucial to the couple, however, because going online was the only way to connect with a small group of other trans men in the same situation. In addition to support for trans fathers, the couple has been collecting resources on homeschooling, vegan children and raising a child on the road. Stephen says, “Thank goodness for the Internet! A thousand first-hand experiences for us to learn from.”

Although the pregnancy has been one huge learning curve, Wyley and Stephan have taken everything in stride. They remain overwhelmingly positive and confident. Wyley says he no longer views pregnancy as an explicitly feminine experience. “Not once going through these whole eight months have I seen myself as less of a man,” he says. “It’s been tough. I have my good and my bad days. Sometimes you have to give up something you love for something great.”

Both men are eager to serve as advocates for pregnant trans men, sharing their story on social media as it unfolds.

When Rowan arrives, Stephan and Wyley will spend time with both of their parents before finally hitting the road, teaching workshops, participating in art shows and taking tours of farms and permaculture. Raising and homeschooling a vegan child on the road are all unconventional choices, but the couple is unfazed.

“People say kids are expensive. Besides diapers and formula, all they care about is attention and having physical experiences with their parents,” Wyley says.

There’s no doubt Rowan will have an abundance of both.