Tyler, the Creator brings 'Wolf' to the Rabbit 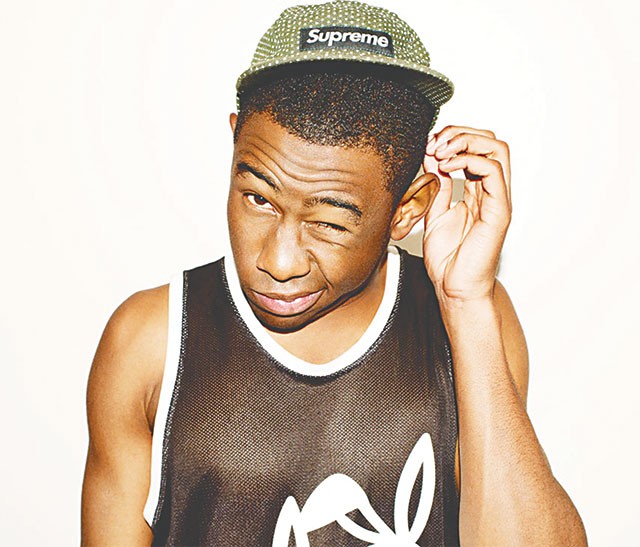 It’s been an insane four years for rapper, producer, video director, graphic artist, fashion designer, and gadfly Tyler Okonma — better known as Tyler, the Creator. Since the release of his DIY cult-classic Bastard (2009), Tyler has found himself at the frenetic center of a hype storm the likes of which could only exist in the world of Twitter, YouTube, and Tumblr. It seems at every turn Tyler is finding more outlets through which to express his warped imagination, whether it’s a clothing line or album art or an Adult Swim show (Loiter Squad). With a gritty L.A. hip-hop sound that boasts an infectious and uniquely eerie tilt, über-profane but introspective lyrics, and a quirky self-made internet empire, Tyler has wormed his way into the angry little hearts of a whole nation of dispossessed teens and adults holding on to their angst. Along with his group of talented and misunderstood rappers, singers, producers, skaters, and punks (Odd Future Wolf Gang Kill Them All, or Odd Future for short), Tyler has turned his drive and singular musical vision into a lucrative brand with mainstream pull and underground sensibilities. At this juncture, as he points out on Odd Future golden boy Earl Sweatshirt’s latest single

“Whoa,” Tyler spends his free time “looking bummy on the block, like [he] ain’t make a quarter million off of socks.” But apparently he did.

With 2011’s mostly brilliant Goblin, Tyler upped the production value and produced his greatest songs to date, “Yonkers” and “Sandwitches” (feat. Hodgy Beats), catapulting his already critically fawned-over crew into an unlikely MTV/magazine cover stratosphere. Now, after the gigantic success of Odd Future’s most subtle artist Frank Ocean and the return of the briefly AWOL Earl Sweatshirt, Tyler is on the road supporting his third long player, Wolf (released on April 2). If what we’ve heard from Wolf thus far — the bass-heavy and autobiographical “Domo 23” and the innocent love song “Bimmer” featuring Ocean — is any indication, the record picks up in style and tone where Goblin left off.

Whether you are a hip-hop lover, a punk, a person with anger issues (who isn’t?), or just a curious show-goer, seeing Tyler live is an experience not to be missed. Tyler and his ilk have proved that they know how to put on a show that reaches into your pissed-off little head and pulls the demons out. For some, this takes the shape of total physical abandon. For others, like myself, it’s simply a Dionysian catharsis, captivating for the sheer thrust of Tyler’s will to greatness via overexertion and imagination. A day after the release of Wolf, SA will be Tyler’s only stop in Texas this time around. Do not miss it.