U.S. Rep. Henry Cuellar of Texas warns election subversion by Ted Cruz and others will backfire 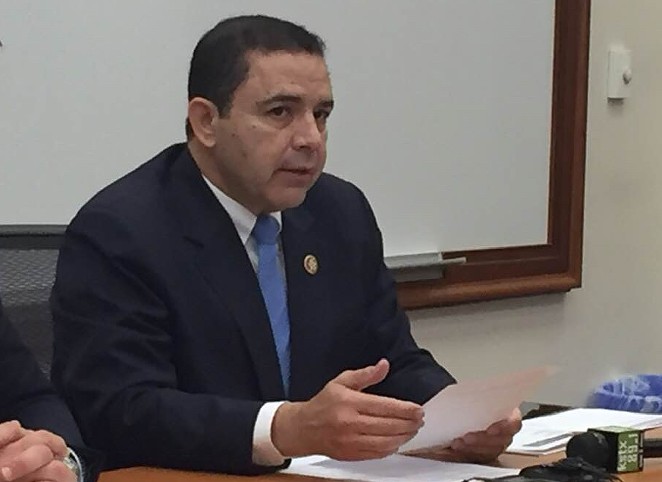 Sanford Nowlin
Henry Cuellar speaks to the press during a 2019 stop in San Antonio.
Wednesday's last-ditch effort by Ted Cruz and other GOP lawmakers to subvert Joe Biden's election win may fly with Trump voters, but U.S. Rep. Henry Cuellar warns it will backfire with the majority of their constituents.

Cuellar, a Democrat whose district includes San Antonio and Laredo, said the majority of U.S. voters realize no fraud occurred during the November election. What's more, they're disturbed by the efforts of Cruz and others to overturn the legally cast votes of millions of people.

"I think moderate Republicans, people in the middle and, of course, Democrats are going to look at this as a step too far," said Cuellar, the last Democrat to serve as Secretary of State of Texas, a position that oversees elections. "They're going to see it for what it is, which is undermining democracy."

Cruz and others have fanned the flames of debunked conspiracy theories propagated by Donald Trump that the "deep state" cheated him out of reelection. Trump's supporters breached the U.S. Capitol Wednesday afternoon as lawmakers counted the Electoral College votes certifying Biden's win, according to a CNN report.

Cuellar — who plans to certify the Electoral College vote — blasted the Trump-aligned Republicans for hypocrisy. Many of them, he pointed out, were elected or re-elected during the same cycle as Biden yet defend their own contests as fair and above-board.

"They were elected using the same ballots, the same voting machines, the same scanners, the same election officials," he added. "To say all these other elections were fine, except the presidential election just doesn't make sense."