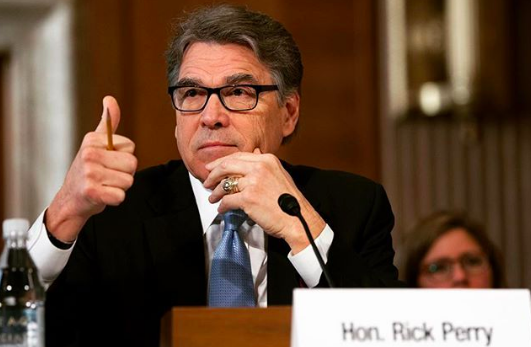 Shortly after Perry recommended one of the supporters as a potential energy advisor to Ukraine's then-new president, the donor and his business partner — another Perry financial supporter — won a 50-year energy exploration pact from the country, the Associated Press reported. The pair secured the deal even though they offered millions of dollars less than their only rival bidder, the wire service reported, citing financial documents.

"It looks too much like a pay-to-play scheme," Castro said on a call with reporters Friday. "It also mirrors closely what we saw [from Perry] in Texas with the awarding of no-bid contracts to huge donors."

While Texas governor, Perry drew criticism that he engaged in crony capitalism to pay back supporters. A 2011 investigation of his 150 largest political donors by the LA Times found that more than half received appointments, business contracts or tax breaks from the state.

Perry has emerged as a key figure in the impeachment hearings of President Donald Trump. Recent testimony painted Perry — soon to resign his cabinet post — as one of the "Three Amigos" who participated in side-channel Ukraine policy led by Rudy Giuliani, Trump’s personal lawyer.

While Castro said the attorney general would normally lead a probe into Perry's dealings in Ukraine, the congressman added that Trump's politicization of the Justice Department makes that impossible.

"Usually that would be the attorney general, but Attorney General [William] Barr and the Justice Department, in a partisan move, have elected to turn a blind eye to all of that," Castro said.

Castro said he's not yet discussed opening an investigation into Perry with other House members. However, he added that it's something he "needs to look into."

"There seems to be a consistent pattern of cronyism that could rise to illegality," he said.