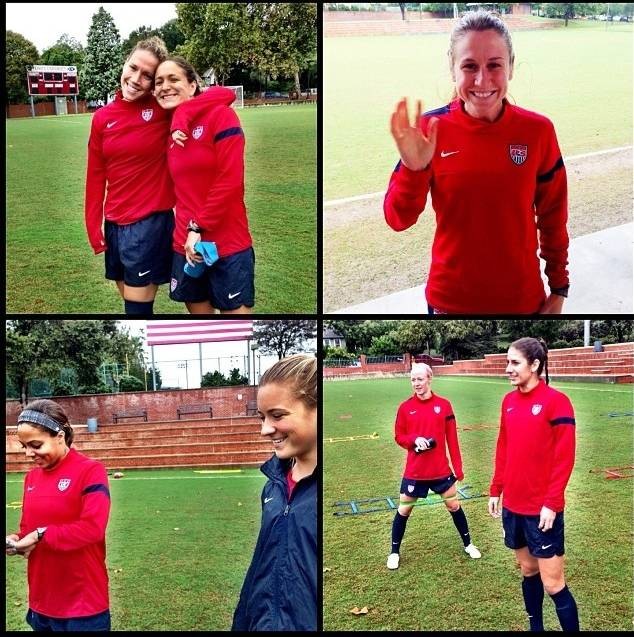 Just days after the US Men’s team wrapped up 2014 World Cup Qualifying winning in dramatic fashion in the final minutes against Panama while also keeping Mexico’s chances alive, the U.S. Women’s National Team has invaded San Antonio. The team is in town ahead of their international friendly match against Australia this Sunday at the Alamodome.

While the women have been training on soggy fields in rainy San Antonio, the team will hold a public training session inside the Alamodome Saturday, October 19th at 11 a.m. All fans are invited to attend the free training session and are asked to park in Lot C. Fans may enter the stadium through the north doors that will open at 10:30 a.m. Admission is free but plan to pay $10 for parking.

Expectations for the Women’s team are high as they continue to dominate the field having won the 2012 London Olympics and coming up just short of beating out Japan in the 2011 World Cup. Sunday’s match is an international friendly so not much is at stake for the number one ranked U.S. team, however it does provide an opportunity for the team to play on artificial turf which will likely be the field surface for the 2015 World Cup in Canada.

The San Antonio match will be the first of three games in 10 days with the team heading to San Francisco on Oct. 27 and Columbus, Ohio on Oct. 30, both games against New Zealand. The extended time together will allow for the team to gel and replicate tournament play. USWNT Head Coach Tom Sermanni explains, “Due to the NWSL (National Women’s Soccer League), the time together for the National Team has been a bit inconsistent so it’s extremely valuable to get some quality time together with the bulk of the squad. “

We can expect a competitive match on Sunday when Sermanni faces his old team Australia, whom Sermanni coached from 1994-96 and 2005-12. “The Australia and New Zealand teams by their nature are very competitive. New Zealand has been playing a significant number of internationals on the road, so they are match-hardened and Australia is reaching the peak of their pre-season before beginning their W-League,” said Sermanni, adding, “outside of the matches against Sweden and Germany last spring, these will be our sternest tests of the year.”

Australia will have to bring their best effort as the U.S. team has been lighting up the scoreboard this year with a 10-0-2 record outscoring opponents 43 goals to 8. Leading the charge will be Abby Wambach, who surpassed Mia Hamm as the world’s leading goal scorer (161 goals) in her 4-goal game against Korea Republic on June 20th, and not to be outdone, Sydney Leroux who also had a 4-goal game in the 7-0 Mexico blow out Sept. 3rd. Other players to watch are Alex Morgan, Carli Lloyd, and NWSL MVP Lauren Holiday.

Of the 25 spots on the roster, 17 of the players play for NWSL clubs. The roster also includes two college players, North Carolina defender Crystal Dunn, who has five starts in her first seven caps for the USA this year, and University of Virginia midfielder Morgan Brian, who scored her first WNT goal in just her second cap against Mexico on Sept. 3rd. Needless to say the US team is deep at every position.

Regarding the increasing competition for roster spots and starting spots Coach Tom Sermanni has said, “I think it’s come along very well. You look at the strengths of the squad, and I can’t judge the strength before I came in, but if you look across the board now, there are at least two players in every position that are viable starters. From a National Team standpoint, or for any squad, that’s quite remarkable. It has helped that during this year, some players have excelled in the opportunities they’ve had to come into the team and start and make an impact.”

Tickets are still available for Sunday’s game at all price levels $22-$250 through usssoccer.com, all Ticketmaster outlets, and the Alamodome box office.

For those not able to make the match, the game will be televised on NBC at 12:30 p.m. And be sure to follow the team on Twitter and Instragram for updates.

Continue on to the next page for highlights from U.S. Women's Soccer -->

For those who say soccer isn’t exciting, I offer up the following clips as evidence to the contrary.

The 2012 Olympic Semi-Final vs. Canada is one for the highlight reel. Tied 3-3 at the end of 90 minutes the teams faced another 30 minutes of grueling battle and with only seconds remaining Alex Morgan scored the goal of a lifetime. After beating Canada the U.S. went on to win the Gold beating Japan in a rematch of the 2011 World Cup.

(apologies for the quality of the video, it was the best we could find)