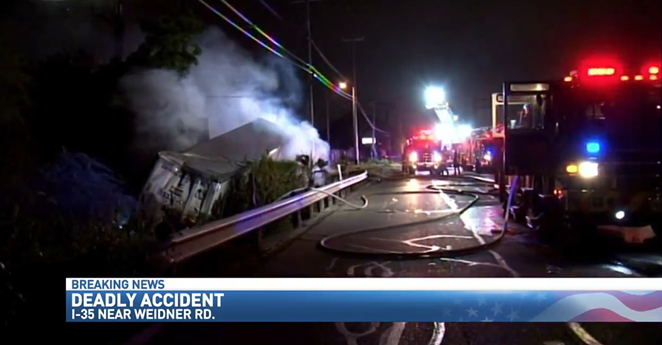 Screenshot via News 4 San Antonio
The driver of a United States Postal Service truck is dead after police say he drove into an embankment overnight.

Safety officials say the driver lost control of the truck on I-35 near Weidner Road just after 1 a.m. on Thursday. The driver reportedly drove off the highway across the access road and hit multiple light poles, which caused power to go down in the area, before crashing into an iron fence. The truck tumbled down an embankment and landed upside down, according to police.

Authorities said the truck's trailer flipped the cab over and burst into flames. The driver was pronounced dead at the scene.

Investigators are working to uncover why the driver lost control of the vehicle and other details of the crash. The victim's information has not been released at this time.