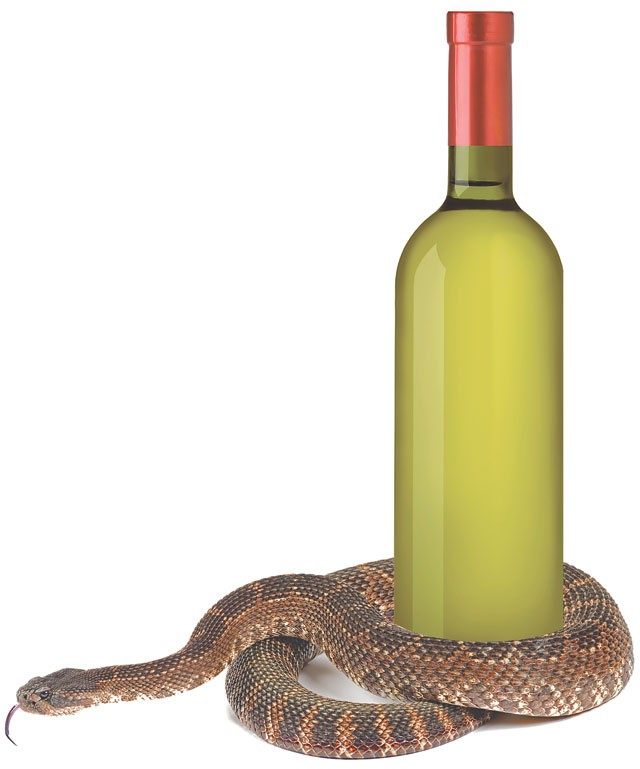 If you find yourself in Albuquerque any time soon, I have two suggestions. Number one is a visit to the American International Rattlesnake Museum in Old Town. Really.

Not only can you "Learn about snakebites, venom, rattles, fangs and more!" but you can observe dozens of live (if usually a little somnolent) snakes in colors and patterns you never thought possible. From the albino western diamondback to the Chihuahuan Ridgenose and beyond, the folksy-funky place exhibits just enough examples to keep twitchy kids and jaded elders alike enthralled.

Kids will have to cool it at the next stop. Located on I-25 north of town, the Gruet Winery Tasting Room is worth a visit even if you think you already know this New Mexico winery's bargain-priced (and critically acclaimed) brut and brut rosé sparklers. They are, as it happens, just the tête of the total production, much of which doesn't make it to Texas — or even beyond the tasting room. It was thus a surprise to learn that there are nine bubblies and five still wines on offer, most of which can be tasted in either the cuvée tasting ($7) or the tête de cuvée tasting ($15) — after which you can keep both your impressions and an etched Riedel glass.

What impressed me most from the low-priced tasting was not the brut NV (non-vintage), which I already knew, but the two sweeter sparklers — the extra-dry NV ($14.99) and the demi-sec NV ($14.99). Both were delightfully aromatic, and both benefited a buoyant acidity that kept them from being cloying. Fruity desserts and spicy Thai foods leapt to mind. Neither the still chenin blanc nor the chardonnay impressed; the syrah had jammy/fruity character but at $17.99 can be bested even by some French examples.

The $15 tasting yielded winners nearly across the board — including an impressive 2009 pinot noir flaunting leather and tart cherry components, but as the bottle prices increase, so do comparisons with other producing regions. At $17.99, the bone-dry Sauvage NV is still worth considering; it came across as lovely, dry, but still fruity. In contrast, the more familiar rosé ($16.99) appeared almost austere — and even drier than the Sauvage. The 2007 blanc de blanc may not be a regular on local shelves; it's $24.99, but my notes say "Frenchy and very pretty."

Pretty in every way is the 2007 Grand Rosé, showing beautiful body and abundant cherry fruit — but we are now exceeding the bounds of usual VV consideration at $32.99. Well beyond our usual cutoff is the $42.99 Grand Reserve vintage 2003; it was pleasant, and it's good to know that our neighbor to the west can pull it off, but at this level I'd look elsewhere. Spain, for example. Or to the non-Champagne regions of France.

But if you're curious, Gruet says that they can ship to Texas, and there are case discounts to be had. Contact them at gruetwinery.com or (888)857-9463. Or just wait until you can't hold out against the prospect of a rattlesnake fix any longer. Pick your poison(s), I always say.