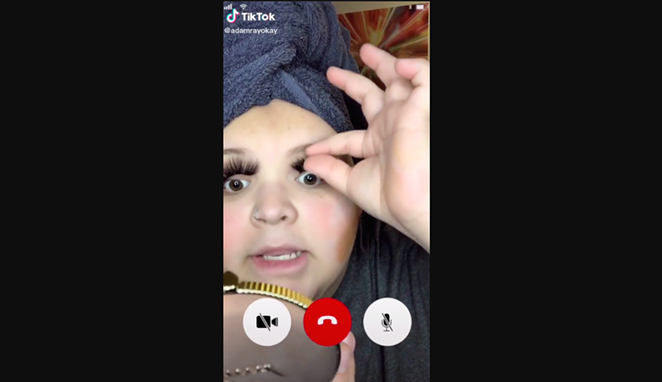 TikTok / @adamrayokay
If you've been on TikTok, Twitter or Instagram in the past few weeks (we know you have), there's a good chance you've seen a video from a new, hilarious personality by the name of Rosa.

Watch any of the brief videos clips and Rosa will sound really familiar. So familiar, in fact, that you're transported back your middle- and high-school days.

That's because "Rosa" is the alter ego of Adam Martinez, a San Antonio native, according to the Express-News.

Complete with huge, but misplaced fake eyelashes and way too much makeup, Rosa re-enacts scenarios many females who grew up in the Alamo City will relate to. Among them, asking a friend for a chongo, pad or a dollar for a slushie; rushing to get ready to go out; and seeking attention on your birthday by getting way too dressed up.

POV: Rosa catches you in the hall and knows you got a dollar for her😭 #fyp #viral #foryoupage

While Martinez, a Southwest High School alum, has only been sharing the Rosa content recently, the videos have gone viral on TikTok and other social media platforms. You can follow Martinez @adamrayokay to see more of his puro comedy bits.

POV: Rosa shows up with a hickey and it catches the teachers attention😭😩 #fyp #viral #foryou thank you SO MUCH for 300k!!💗