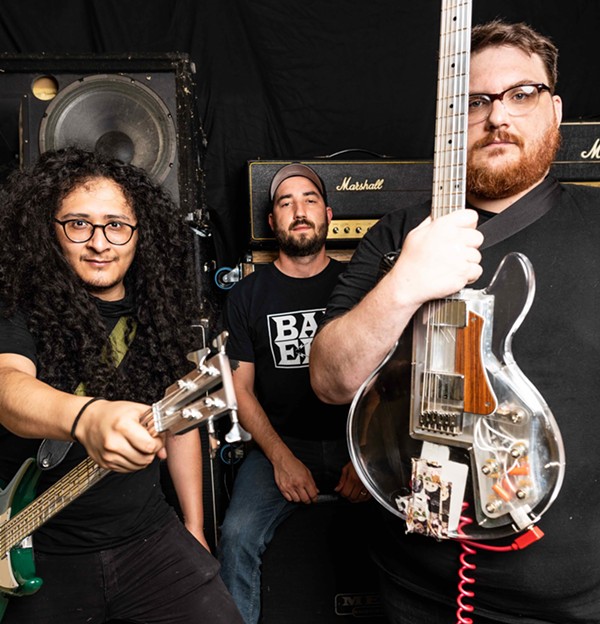 Jaime Monzon
When a rock band talks about wanting to reach a wider audience with a new album, it’s often a sign a producer with a golden touch helped it craft radio-friendly hooks. Or that it’s lowered the guitar in the mix and thrown in a few power ballads.

For San Antonio avant-metal act The Grasshopper Lies Heavy, it means that the majority of the eight tracks on its new album, A Cult That Worships a God of Death, have vocals on them. Not pretty vocals, mind you, but howling, anguished bellows.

And, oh yeah, the band hired a publicist to help push the release.

Compromise isn’t exactly high on the agenda for the San Antonio-based trio, which for 16 years has energized adventurous listeners and confounded the other kind with a brutally loud wall-of-sound approach that defies easy categorization.

“When it comes to making music, ‘palatability’ has never been part of the equation for me,” said guitarist-vocalist James Woodard, the band’s principal songwriter, and after at least 10 lineup changes, its only constant member. “It started when I was a teenager. My brother had a drum machine, and I’d lock myself in my room and record metal with blast beats on my computer.”

On Saturday, July 17, Grasshopper is celebrating the release of A Cult That Worships a God of Death with an evening matinee show at the Lonesome Rose with likeminded SA noise rockers Pinko. (Make note of the gig’s early 6 p.m. start time, and also check out the Current’s interview this week with the album’s cover artist, John Guzman.)

Since his humble bedroom beginnings, Woodard has been Grasshopper’s Ahab, leading the band through a tireless recording and touring schedule. He’s not exactly been eager to wait around for someone else to take note.

A Cult That Worships a God of Death is the band’s third long player and its second full album released through Minneapolis’ Learning Curve Records. Woodard himself isn’t precisely sure how many cassettes, EPs and digital tracks the band has released over the years, many on his own Canon Imprint label.

He’s also hard pressed to remember the number of scrappy, do-it-yourself tours its logged during that time. However, a clear high point in all that roadwork was an eight-city Japanese tour the band did in 2019.

“There’s at least one moment on every tour where I’m in someone’s living room at 4 a.m. and can’t get to sleep and ask, ‘Why am I doing this?’” Woodard said. “I think the answer is that I can’t stop. At this point, it’s a sick compulsion.”

As evidenced by the band’s frequent turnover — it’s had a Spinal Tap-worthy number of drummers before Steven Barrera, who handled the job on A Cult That Worships a God of Death — not everyone shares Woodard’s compulsion.

Indeed, the group’s other longest-serving member, bassist Mario Trejo, split after recording the album after a pandemic-inspired soul search prompted him to reprioritize his life.

New bassist Oscar Moreno joined the band after falling into its orbit when he tagged along to photograph the Japanese tour.

While A Cult That Worships a God of Death places more emphasis on vocals than past releases, that’s not the only evolution it documents. The second side features two expansive tracks that showcase a quieter, less claustrophobic side to Grasshopper’s sound.

The title track, broken into four parts, builds to a dreamy interlude marked by somber synthesizer swells and chiming guitar arpeggios. The song that follows, “Bullet Curtain,” is another slower number, portions of which wouldn’t sound out of place on a mid-’70s King Crimson record.

“The music on the new album is still challenging, and it’s going to be that way because my brain is broken and that’s the way I write shit,” Woodard said. “I love that caveman shit down on the first five frets.”

Woodard is being self-deprecating when he describes Grasshopper’s music as neanderthal. Sure, it’s pummeling and unrelenting. But it’s also likely to be delivered in odd time signatures and include an abundance of dynamics and stop-on-a-dime precision.

The band’s off-kilter rhythmic drive brings the Jesus Lizard to mind, and its stone-fisted riffing evokes New York noise rockers Unsane. However, observers point out there’s always been a quieter side to Grasshopper’s chaos. After all, the band dropped a pair of 20-minute synth-driven soundscapes via Bandcamp in February, and in 2017, it released an eerie, ambient soundtrack to the indie film Cavern.

“I’m not objective about this at all: Grasshopper have always grabbed me by the balls,” said Bobdog Catlin, a San Antonio recording engineer who’s tracked and mastered multiple releases for the band and collaborated on the Cavern soundtrack. “This is what old people say, but they take me back to a time in the late ’80s and early ’90s when people were putting out a lot of bizarre and heavy stuff. It’s like you took the first Fear album, the third Voivod album and pretty much everything Cop Shoot Cop did and mixed them together.”

As a member of seminal South Texas metal act S.A. Slayer, Catlin knows his heavy stuff. But it’s also worth noting that most of his focus these days is on recording and mastering classical music. For Grasshopper, he makes an exception.

“There’s something deep there,” he said. “Nobody on earth communicates musically like James Woodard.”

‘Get the fuck out’

Grasshopper’s challenging music isn’t likely to mean its members can quit their day jobs. “This band is a second job, and it’s an unpaid job, mostly,” Woodard explained.

However, its perseverance is paying off with an international cult following, better bookings and slots on festival bills — an upward trajectory Woodard hopes A Cult That Worships a God of Death will continue. In the end, though, the group’s hard-fought success comes down to a willingness to hit the road and put in hard work.

“The No. 1 thing that San Antonio bands can do for themselves is to get the fuck out of San Antonio,” Woodard said. “Play in front of strangers and rip their faces off. … The struggle is always extending the network, meeting new friends. As an introvert, that’s been a challenge for me.”

But it’s one that Woodard seems to have made the best of. Collaboration has been a hallmark of Grasshopper’s output.

Both of Woodard’s current bandmates are aware of Grasshopper’s frequent lineup changes, but they said they see their time in the band as a long-term investment.

After three years as its percussionist, Barrera said he sees himself as an interpreter of Woodard’s vision. A veteran of school drumlines going back to junior high, he added that he’s able to apply conventional theory to the bandleader’s more intuitive writing approach. That helps when adding transitions and dynamic shifts to the songs.

“I feel like I’m here to connect the dots,” he said. “Capture James’ lightning in a bottle.”

Moreno said Grasshopper’s frequent lineup changes gives him confidence in Woodard’s leadership. He reads it as a sign the frontman isn’t willing to put up with members who can’t pull their weight.

Indeed, Moreno said he knew he and the other members of the band were of a similar mind when they turned down an invitation to attend an overnight party after one of their Japanese gigs so they could return to the hotel and stay fresh for the rest of the tour.

“I trust James’ judgment,” he said. “He has a vision, and he has a plan where
he wants to be with this band.”