War on the Cities: How Texas GOP Leaders Continue to Punish Municipalities During the Pandemic 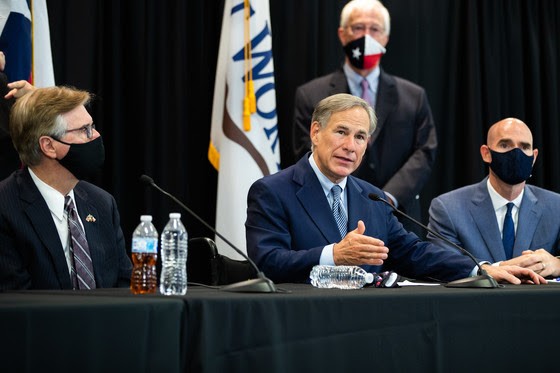 Courtesy Photo / Texas Governor's Office
COVID-19 has frayed all sorts of relationships: husbands and wives who aren’t used to spending so much time cooped up together, parents and kids with differing opinions on how safe to play it during a global pandemic.

And, to be sure, it’s worsened the already fractious relationship between Texas’ Republican leadership and leaders of the state’s largest municipalities, the majority of which are under blue control. What’s been a long-running cold war has escalated — at least rhetorically — into a shooting war over the past few months.

In a June appearance on national news show 60 Minutes, San Antonio Mayor Ron Nirenberg dismissed a letter from Texas Attorney General Ken Paxton telling the city to loosen its restrictions on religious gatherings as an effort to “score cheap political points, which [Paxton’s] been doing his entire career.”

And it’s not uncommon during nightly coronavirus briefings to hear Bexar County judge Nelson Wolff jab at Gov. Greg Abbott for tying the hands of local officials as they try to contain the pandemic. The targets of Wolff’s ire have included the governor’s weeks-long resistance to issuing a mask order and a flurry of legal memos from Paxton telling cities that state orders supersede their own.

While localities cleared a major hurdle on July 2 after Abbott finally handed down an almost-statewide mask order, Wolff said the tension persists. For example, Abbott’s decision not to accept prisoners into state penitentiaries during the pandemic and his refusal to let local judges expand release for some people who can’t pay bail has resulted in dangerous overcrowding in local jails.

“Although we’ve worked through some issues, we’re still at odds on plenty of others,” Wolff said. “We’re really getting screwed at the jail because they’re sticking us with inmates that should be headed to the prisons.”

And, to be sure, San Antonio isn’t the only large Texas city under fire from the capitol amid the health crisis.

Harris County Judge Lina Hidalgo’s frequent sparring with Abbott over local stay-at-home orders and school reopenings has made headlines. And the governor continues to resist calls from Rio Grande Valley officials to issue a stay-at-home order, even as that region’s COVID-19 surge overwhelms its hospitals.

Tensions over the limits of local control are nothing new in Texas. The pandemic has simply poured salt in old wounds.

That tension was apparent when Abbott six years ago shut down Denton’s plan to ban fracking, and when he fought Laredo all the way to the Texas Supreme Court to overturn its ban on plastic bags. It also came into sharp focus when the governor entered into a pre-pandemic pissing match with the city of Austin over how it handles its homeless population.

But with Texas now surpassing 12,000 COVID-19 fatalities, the stakes are no longer economic or environmental, they’re life and death. The escalation in rhetoric is understandable, political observers say.

“This question over who’s in control isn’t a novelty,” said St. Mary’s University political scientist Arturo Vega. “This is a continuation of an existing tension between state and local government. They flare up occasionally under certain circumstances, which is what we’re seeing right now.”

For decades, the political logic in Texas was that municipalities couldn’t count on the state for much in the way of money, but in return, it largely kept its hands off their affairs. That changed with the rise of the Tea Party, which has managed to turn tree ordinances, plastic bag bans — and now masks — into culture-war issues.

“The state started saying to blue cities, ‘You guys are systematically flirting with socialism, and we’re going to put a stop to it,’” said Cal Jillson, a political science professor at Southern Methodist University. “It’s a partial reversal, in that it says to the cities, ‘You’re not going to have the discretion you used to.’”

As if there was any doubt of that, Republican Dennis Bonnen, speaker of the Texas House of Representatives, drew headlines after he was caught on tape last year mocking city and county leaders who opposed a bill designed to limit how local governments raise and spend cash.

“Any mayor, county judge that was dumbass enough to come meet with me, I told them with great clarity, my goal is for this to be the worst session in the history of the Legislature for cities and counties,” Bonnen said on the recording. He added that the 2021 session would be even worse for municipalities.

During the opening stages of the pandemic, Abbott took a hands-off approach, largely allowing local leaders to guide their own reaction to the worsening health crisis. That changed once he determined it was time for Texas’ economy to reopen.

Despite a pledge to let “doctors and data” drive the economic restart, Abbott charged ahead at a breakneck pace — aided by an advisory group consisting primarily of rich campaign donors. He moved ahead on the phased reopening even as local leaders raised concerns and the state fell well short of his goal of 30,000 coronavirus tests a day.

Rather than call a special legislative session to allow more input, Abbott has largely gone it alone as the state grapples with one of the most profound crises in its history. It’s a path that seems at odds with Abbott’s history as state attorney general, when he repeatedly sued the federal government, arguing that local control is preferable to a top-down approach.

Now, with schools set to reopen, potentially touching off a fresh wave of infections, Abbott has told municipalities that school boards, not local public health officials should have final call on reopening plans.

Compounding the problem, political observers say, is Abbott’s unwillingness to stand up to the right wing of his own party, which has politicized the pandemic, turning mask mandates and stay-at-home orders into threats to individual liberty.

In late May, when handing down what amounted to a stay-at-home order to curb the spread of the virus, Abbott engaged in all manner of ass-backwards explanation to call it something else — verbal gymnastics intended to avoid criticism from the God, guns and guts crowd.

Shortly after, he was forced to post an online video to clear up his murky explanation: it was, in fact, a stay-at-home order, just called something else.
Faced with criticism from the right, Abbott also backed down on enforcing that same order. After Tea Party stalwarts including Ted Cruz rallied around Dallas beautician Shelley Luther, who faced fines and jail time for refusing to close her business, Abbott canceled the penalties he’d implemented a few weeks earlier.

If municipalities stand in the way of those goals, he’s willing to ride roughshod over them.

So far, the consequences of rhetorical war between Texas’ GOP officials and its big cities over the COVID crisis seem far more damning for Abbott than for San Antonio’s local leaders.

Just 38% of Texans approve of the governor’s pandemic response, according to a survey conducted in July by Harvard, Northeastern, Northwestern and Rutgers universities. In April, his approval on the issue stood at 61%, and it’s slipped every month since.

“I certainly don’t think he’s come out ahead on this,” Wolff said.
Even so, Abbott seems to have doubled down on his fight with local governments. Last week, in response to Austin’s plan to slash its police budget, Abbott called a press conference to announce he’ll support legislation capping tax revenue for municipalities that reduce spending on their police.

Despite the slipping poll numbers, Vega of St. Mary’s University isn’t sure Abbott will see significant consequences when he’s up for reelection in November 2022.

Time could erase some memories of how Abbott’s handled the pandemic since then, the professor points out. Plus, Texas remains a conservative state, especially its rural communities.

“This is what happens when you have one party controlling all the levers of power in Austin,” San Antonio Mayor Nirenberg said. “My hope is that voters realize that’s the case. When municipalities can’t control their own destinies, it isn’t something that just hurts Democrats or Republicans. It hurts everyone.”