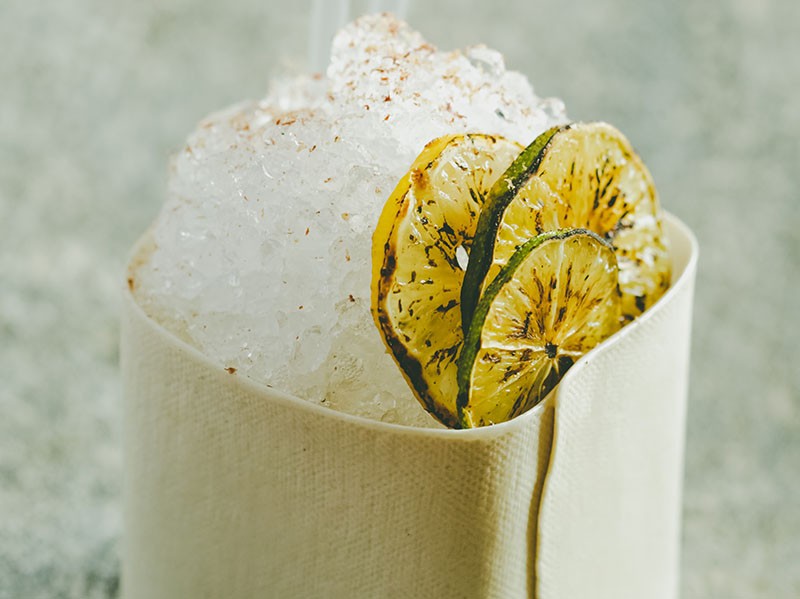 Amy Gawlik
A sneak peek of the offerings at Mezcalería Mixtli

Hot cocktails don't just come in the toddy variety around these parts. This being South Texas and all, area bars are findings ways to combine the seasonality of local citrus and the availability of heat-adding ingredients to our favorite libations.

We can't talk about 'tails without a mention of The Brooklynite (516 Brooklyn), which gained more national attention after being nominated as one of Food & Wine's Best New Bars in 2014. Their latest menu, which tapped autumnal flavors en masse, used several "hot" ingredients to spice up the selection.

Designed in part by Javier Gutierrez, the new menu includes, for instance, the Mad for Daphne, made with amontillado sherry, cherry brandy, carpano antica bitters and Saigon cinnamon for that added kick. The Smoking Buck, originally created for Meatopia, brings the heat with several key ingredients. The drink starts off using 100-proof bacon bourbon, created through a fat-washing method that combines 100-proof bourbon with cooked Benton's bacon, in essence infusing the spirit with the tasty fat and smoky flavor. A pineapple gomme made using xanthan gum acts as a thickening agent for a better mouthfeel, and the spice comes through with house-made ginger beer, Hungarian smoked paprika (found at specialty grocery stores) and a few grinds of cracked pepper.

The Brooklynite is also adding a few more mezcal-laced drinks, a move that will help ease San Antonian palates into the mezcal pool we're all about to dive into. For The Brooklynite's Keep Me Wild, the bar combines ¾ ounce Laird's apple brandy, ½ ounce mezcal, ½ ounce Eau de Vie, ¾ ounce thyme syrup, ¾ ounce lime juice, a bar spoon of house allspice dram and two dashes of a house-made chipotle tincture for a bold and hot number. The tincture uses dry chipotles to complement the smokiness of the mezcal.

Other tinctures and infusions are being used over at TBA (2801 N St. Mary's), where new head bartender Joshua Brock is adding heat to Aperol, an Italian aperitif. Brock, who took over the reins from opening bartender Jonny Yumol, adds ancho chile, guajillo chile and Thai chiles for good measure and lets the spicy concoction simmer for a number of days before using it in his Rollin' Dry, his take on The Boulevardier. The results are smooth and bright, with a hint of smoke that goes down easy.

When it comes to hot trends in cocktails, two new bars are adding the smoke and Caribbean factor to the city. Concrete Jungle (1628 S Presa), which opened its doors inside the old El Sauzeno in Southtown in early December, is easing into its cocktail program by offering tiki classics such as The Zombie, Cobra Fang and Rum Julep to start. The bar is manned by Roy Guerrero (formerly with The Esquire Tavern), who gained an appreciation for mezcales while working under Houston Eaves. A house menu of cocktails will follow with mezcal-laced goodies that will marry the smoky Mexican spirit with island flavors.

And while Concrete Jungle picks up steam, Jesse Torres is gearing up to help San Antonians get familiar with mezcal in the classic sense. As partner with Diego Galicia and Rico Torres at Mixtli, the trio will open Mezcalería Mixtli in January with a collection of 75 spirits featuring various expressions of mezcal via varying producers.

For Torres, who spent the last eight years in the Air Force, on active duty for six and reserves for the remaining two, the point of the Mezcalería is to acquaint San Anto with the spirits of Mexico. The 32-year-old is already halfway there, having spent the last year mixing cocktails for the boxcar restaurant that infuse tequila and other similar spirits with Mexican flavors. And he's not afraid to try something new, like his bright blue margarita served in globe glassware that used an ambergris resin for their Baja menu. Ambergris is basically whale vomit, by the way, which takes on an earthy fragrance.

"There have been some cocktails that have stood out and I want to bring those to the Mezcalería," Torres said. "They're just simple and good and let the flavors stand out." He mentioned a cocktail which combined mezcal, xoconostle and lime juice with a sal de gusano rim, which will definitely make the cut.

The Mezcalería will open this January and Torres hopes to integrate Mexican ponches, rompope and perhaps a hot chocolate similar to one he made over this winter using house-made chocolate tablets and marshmallows into the offerings.

"I want to be able to show people something new, because a lot of people aren't familiar with mezcales or they have preconceived notions of what it is," Torres said. "It's a very new exciting thing."

He's hoping to keep the bar accessible by still carrying local whiskeys, bourbons, gins and vodkas, and turning the Mezcalería into a neighborhood joint, where he'll keep a simple paloma on tap. Flavors will change with the seasons, so you can expect an icy mezcal-filled popsicle come summer time.