We Need to Talk about Those Spurs Veladoras

Send a News Tip
Update: 5:04 p.m. Friday, May 16 2014: We've been informed that Leighelena has stopped selling these Vela Reina candles as a gesture of support for SA's local arts community. Happy Friday to everyone who followed and shared this story!

Update: 4:15 p.m. Friday, May 16 2014: Palacios has since updated his original story on the veladoras for TPR, including an interview with Stolarski.

Heading into the next round of the playoffs, a lot of Spurs fans are searching for a little extra assurance that this year the drive for five championships will be realized. Some

. proteccion, if you will.

With that in mind, you may have seen some Spurs candles in the style of veladoras floating around the internet (Ebay), local boutiques (Leighelena) and even restaurant parking lots (Rosario’s). This particular candle (not to be confused with other, much different veladoras in the same vein) has a woodcut-style illustration of a skeleton Spur—originally just Manu Ginobili—generally wearing one of the big three’s jersey numbers. They’re sold for about $12-$15 depending on the source and we’ve also seen T-shirts with the same design for sale. They also feature artwork ripped off from a San Antonio artist who gave it away for free years ago.

How do I know this? Well, in 2012 the Current featured this same artwork (curiously with a signature and copyright that is nowhere to be seen on these candles) with the original artist’s permission as a pdf that anyone could download to make their own veladora. A year before that, the artist, a graphic designer and lifelong SA resident and Spurs fan named Jamie Stolarski, made the same artwork available to the blog SAFlavor after blogger Garrett Heath had seen the image on Stolarski’s website and contacted the designer.

Maybe it was only a matter of time before someone decided to make a buck off someone else’s artwork, but this year, for whatever reason, the proteccion pirates have really taken off. In particular, there’s a woman in Austin named Julie Torres, who runs a business called Vela Reina, selling candles featuring Stolarski’s exact design (save for changing the Spurs jersey number). These are the candles featured at Leighelena. Yesterday, Joey Palacios with TPR interviewed the Vela Reina proprietor, who declined to be named for his story (always a red flag!) and she indicated that the idea was a wholly original one that she herself came up with just last year.

However, in an email shared with the Current, Torres admitted she first saw the image when a friend sent it to her. She said the version she received had no signature or copyright. Yet, under the copyright act of 1976, copyright attaches to a work automatically. At the very least Torres should have made an effort to contact the originator.

I’m no lawyer, so I can’t say this is 100-percent copyright infringement (lawyers that I’ve consulted for this article seem to side with Stolarski), but it sure is a shitty thing to do. To break it down, a die-hard Spurs fan and San Antonian created an image and idea for other die-hard Spurs fans to enjoy for free. He never made a dime. Now, someone else has co-opted his idea and is selling them for a pretty penny with no acknowledgement or payment to the image’s creator.

If you want to right the balance in the world, which the NBA gods will surely look favorably on (hint, hint), all you really need to do is commit to not buying one of these specific candles or T-shirts. Instead, as originally intended, download the original image here and make one yourself. 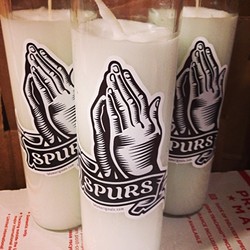 If you’re not the crafty kind, at least buy one of artist Robert Tatum’s wildly different veladoras, or check out those being sold at Papa Jim's Botanica. The concept's not the issue, the design is.