Weezer Fever: A local tribute to a ’90s icon 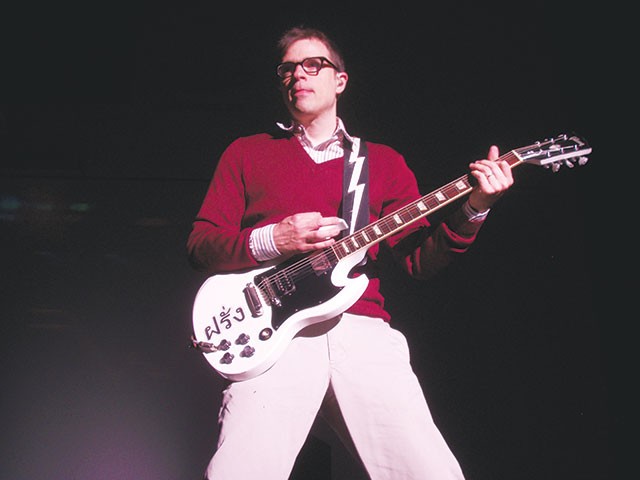 For any ’90s kid looking to soundtrack their teenage angst, there were no shortage of options: Smashing Pumpkins, Nine Inch Nails, Tool, Rage Against the Machine—take your pick.

But for Chris Etheredge, there was just one that mattered.

“Weezer is the only band I want to do something like this for,” says the guitarist. “There’s something about their kind of music, it just holds up. There are a lot of bands I listened to back then that I don’t give a rat’s ass about now. But with Weezer, the songwriting is so great that it still sounds as good as the day I first heard it.”

Etheredge has channeled his love for all things Weezer into “A Tribute to Your Teenage Angst,” pulling together a five-band salute to Rivers Cuomo and crew. The bill includes garage-pop upstarts Islands and Tigers, emo outfit lovelettertypewriter, dream-pop four-piece Diving, noise-rock enthusiasts The Freebies and Chris’ own band, post-rock stylists Bright Like the Sun. Each band will be allotted 30 minutes to profess their Weezer love during the Saturday show at Limelight.

If the idea of a Weezer tribute show came easily enough, the challenge for Etheredge was selecting the right bands to do justice to the original material.

“There [are] a lot of great bands in San Antonio, but I wanted specifically to find ones that complement the Weezer sound,” says Etheredge. “I was actually just talking to the guys in lovelettertypewriter about this in the studio, whether you try to put your own sound on the songs. They were like, ‘No, it’s Weezer—you’re not going to improve on it.’”

As Andrew Christian, singer and guitarist from lovelettertypewriter, elaborates, “As much as we’d love to put our own spin on them, I don’t think I’d be too fond of altering these songs that have held so much meaning to me as a musician.”

When it comes to Weezer worship, it was clear that for everyone involved in the tribute, their adoration is specifically directed towards the band’s first two albums: the 1994 self-titled debut (better known as “The Blue Album”) and 1996’s proto-emo classic Pinkerton.

“Honestly, I’m not a big fan of their work post-Pinkerton,” says Christian. “They made some good jams here and there but nothing impacted us like the first two LPs.”

For Etheredge, speaking for his fellow bandmates in Bright Like the Sun, “We’re all mid-to-late 20s, so for us, that’s our youth. I don’t think I’ve even heard a full record of theirs after Pinkerton.”

Not that Weezer is a purely generational band. Some of the younger band members on the bill weren’t even born when Weezer first formed. So what is it about these nearly two-decade old albums that continue to resonate beyond Gen X kids?

“I firmly believe that were those records released today, they’d be just as big now as then,” explains Etheredge. “Those two have such an aura. They’re simple songs, but they’re so well-written, from the lyrics to the guitar parts, that they just hold up.”

“My second show I ever went to as a kid was Weezer,” says Islands & Tigers singer/guitarist Bobby Rivas, who at 20, is exactly the same age as the blue album. “Growing up, playing guitar at 12 years old, those were some of the first songs I learned. Rivers Cuomo is our god.”

If there was a battle to be fought, it was over how to divvy up the 20 tracks on the blue album and Pinkerton among the six bands on the bill.

“We did have to fight over ‘El Scorcho,’” says Rivas. “We had a long email going with some of the other bands where we had to settle who got to take that song. But we knew that stuff off the first two albums would be hard to get.”

For their part, lovelettertypewriter will mine a couple of early non-album deep cuts including “Long Time Sunshine” and “Jamie” along with Pinkerton closer “Butterfly.”

Bright Like the Sun’s set reads a bit more like a greatest hits tracklist, including “My Name Is Jonas,” “The Good Life,” “Say It Ain’t So” and the band’s personal favorite “Only In Dreams.”

“That track is so different from anything else they’ve ever done,” says Etheredge. “‘Only In Dreams’ was the first exposure I had with post-rock without even knowing what post-rock was. That second movement brought me to tears when I first heard it.”

As is the case with such a beloved band, the more the everyone talked Weezer, the more clear it became that the tribute show couldn’t come soon enough.

“The bands that are playing are calling me, telling me that they’re not even practicing their own material, they just want to play Weezer songs,” says Etheredge. “I think the energy for the show is going to be unreal.”

Weezer: A Tribute to Your Teenage Angst feat. Bright Like the Sun, Diving, Islands & Tigers, lovelettertypewriter, The Freebies