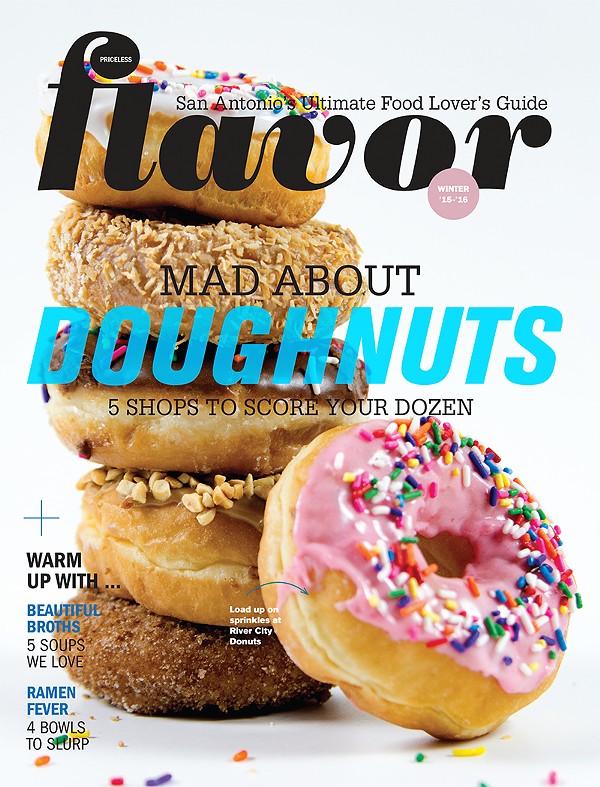 It's been a busy four months since our last edition of Flavor. Southerleigh Fine Food & Brewery had just opened its doors then, and now it's the second newest eatery to hit the Pearl, with a recently launched Saturday brunch. The opening of Hotel Emma brings Supper, with chef John Brand at the helm crafting simple, elegant and — most importantly — delicious plates for both hotel guests and the community. Little sister Larder, the hotel's coffee shop/bakery/boutique grocer is perfect for morning and afternoon pick-me-ups and a quick grab-and-go lunch. Lest we forget Sternewirth, the hotel's bar filled with rich leather couches and intimate seating areas (the brew tanks turned into cubbies are especially comfortable), and a serious line of cocktails and snacks.

Eaters bid adieu to The Monterey in November, while embracing Brigid, a modern American concept via chef Chris Carlson and bar-owner Steve Mahoney. Brother bar Francis Bogside adds a mature vibe to cocktails in the area with Irish bites to boot.

Feast, Andrew Goodman's first restaurant concept gained a sister restaurant and bar in Rebelle and Haunt, which opened in the St. Anthony Hotel this fall. Both dark and sleek, the establishments have turned into hot spots for followers of chef Stefan Bowers.

The Cortez Family expanded their restaurant empire with a fast casual addition at Market Square with Viva Villa Taqueria (featured above) led by chef Cariño Cortez. Though the model seems familiar (think Chipotle, but better), the flavors soar, the décor is nuanced and the options are plenty.

The biggest trend to land in SA is the veggie-forward plates now found at vegan-specific joints and eateries such as Pharm Table, where chef Elizabeth Johnson is making vegetables shine with cross-cultural cooking techniques. You'll want to eat there when those resolutions kick in.

In the next few months, expect big things out of the Empty Stomach Restaurant Group as they take over the Teka Molino space on St. Mary's; Brent "Doc" Watkins works on making jazz great again at Jazz, TX inside the Pearl; and chef Andrew Weissman opens a second Moshe's Golden Falafel.

5 Soups to Keep You Warm This Winter

The 20Somethings Take on Ramen

8 Salads For When You Need To Get Your Greens In

26 San Antonio Restaurants Where You Can Get Delicious Cheap Eats

10 Hot Restaurants: Where to Eat and Drink Right Now in San Antonio

Why I’m All About Small Bites: Big Flavor Payoffs

Doughnuts, From Classic to Fanciful, are Making Their Mark in SA

3 Progressive Meals to Try This Winter

3 Hot Cocktails to Make This Season

13 Ways To Get Your Drink/Grub On This Season