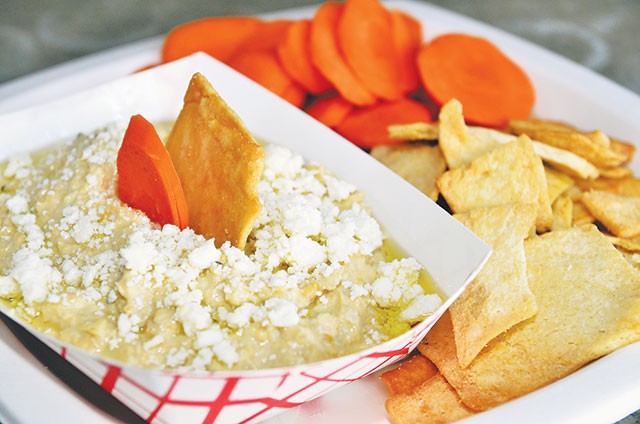 Courtesy photo
Hummus with a hint of IPA because ... why not?

Chef Scott Boone, the latest addition to the Friendly Spot team, has crafted an entirely new menu for the Southtown icehouse of tempting, fresh and easy-to-eat foods–all for $10 or less. Boone, formerly with 20nine Wine Bar & Restaurant, has been with the Friendly Spot for just under two months.

Boone called the IPA hummus “his absolute favorite on the menu.” Served with pita chips, fresh carrot chips and topped with a sprinkling of crumbled feta, the chilled hummus is slightly garlicky with an earthy finish. By it’s name–IPA–I expected a bitter or hoppy flavor, which I didn’t detect while eating.

“We put just a little in to be able to barely taste it,” explained Boone. “I’m experimenting with which IPA to use, since they have different flavors,” said the chef. The hearty portion of hummus, fit for sharing between two or more, will set you back $8.

An order of two smoked trout cakes rings up at $9. Boone serves the cakes atop a bed of sweet and tangy green apple slaw, topped with a scant drizzle of smoky bacon aioli and crunchy bacon bits. The fantastic slaw could easily stand on its own as a side dish, and while I don’t subscribe to the “everything’s better with bacon” school of thought, I’ll concede that the crispy pork adds a welcome burst of saltiness to each bite of slaw and trout.

The cakes successfully strike a delicate balance between smoky and fishy, although the barely detectable bacon aioli could play a bigger role than it does. Admittedly, this dish has a lot going on—the sweet slaw, savory cakes and salty bacon—but it all comes together just right. Though fairly small, they’re rich, so order the smoked trout cakes to share (or not).

Boone’s fish tacos claim the prize as the favorite addition to the Friendly Spot’s menu. Pieces of seared and only slightly blackened mahi-mahi anchor the dish, while chipotle crema delivers a subtle, smoky spice. The pineapple pico, however, really knocks these tacos out of the park. Sweet, reasonably spicy and packed with flavor, I’d eat this pico with a spoon. The queso fresco topping isn’t immediately noticeable, and the small, unassuming flour tortillas mostly serve to contain. Too good to share, one person can easily dispatch the tacos, which run $8 a pair.

Other items of note are the veggie quesadilla, the smoked barbecue pork sliders and the pork tacos—prepared similarly to the fish tacos but sans creatures of the sea. “I think a lot of people are starting to stay to eat,” said Boone. Hinting at a forthcoming salad and a few vegan appetizers, he added, “as soon as I get the kitchen built out a little more I’ll do an even larger menu selection.”