What to do with Seville oranges 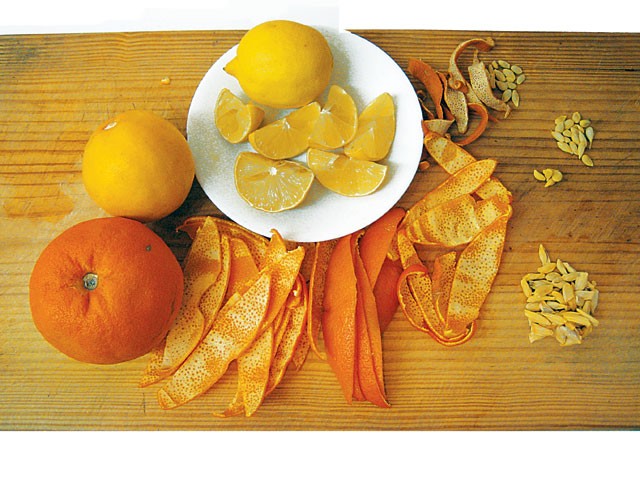 I recently spent an afternoon juicing, researching, and playing with sour oranges. It made a big, sloppy, super-fun mess. In a recent article, I referred to them as Mexican sour oranges (also called bitter oranges) because they are, in fact, common in Yucatecan and other regional cuisines of Mexico. Yet the sour oranges that grow so well here, that no one seems to know what to do with, are in fact the Seville oranges of traditional Dundee marmalade fame, and prized the world over for their juice, oil, peels, and even the leaves.

Native to Southeast Asia, evidence suggests they've been grown in Sicily since the 11th century, cultivated in Seville since the 12th, and dispersed the world over via Spanish colonialism. According to legend, there's a tree in the orangerie of Versailles planted in 1421. Notoriously self-sufficient, they are frequently used as rootstock for the more finicky sweet orange. They produce well from seed, which is convenient since there are about 30 in each fruit. They are very high in pectin, which can be rendered by boiling the pith, seeds, and membranes and stored for future jelly making. Or, make orange marmalade; the recipe I used suggested tying a bunch of seeds in muslin and boiling it with the juice and peel, removing it from the pot when you add the sugar for the final assault. It worked remarkably well, and the flavor is amazing. Sour orange curd is UNBELIEVABLY good — follow any recipe for lemon curd, substituting the orange juice and zest. Conveniently, I still have three bottles of juice in the freezer for orangeade, margaritas, and ceviche this summer, and marmalade glaze on a simple vanilla custard tart is on the agenda. The dried peels are beautiful, smell good, and make a wonderful addition to a Provençal tomato sauce. If even a fraction of the seeds germinate, we'll have enough for an entire orchard. In which case, I may need to start a colony of honeybees.