What Will San Antonio Do With Its Travis Park Confederate Statue? 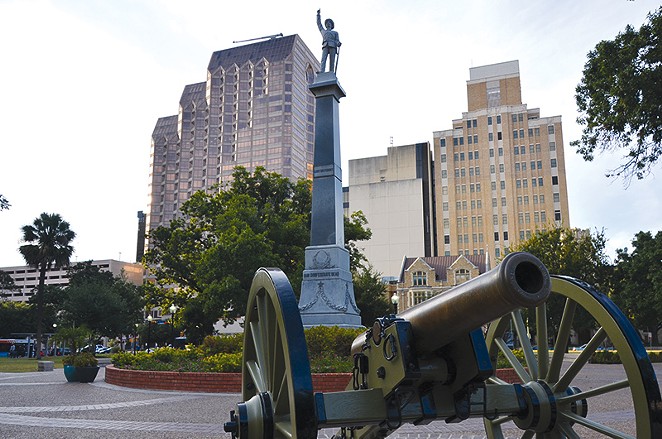 Michael Marks
The statue of Colonel William Barret Travis in the downtown SA park named after him and a rendering (inset) of a proposed addition.

The soldier atop the Confederate monument in Travis Park has stood watch over the square green patch on the northern edge of downtown since 1900.

The 40-feet-high obelisk is topped with a statue of a mustachioed Confederate soldier. He holds a rifle in his left hand, resting it against the ground. His right hand points skyward. The words "Lest We Forget" are inscribed halfway down the monument, followed by "Our Confederate Dead" carved further down, closer to the base.

But the soldier's future is uncertain. His watch may soon come to an end, or at least be shared by dozens of civil rights luminaries.

Like many Confederate symbols nationwide, this SA statue has come under fire since Dylann Roof, a 21-year-old white supremacist, allegedly shot and killed nine black worshipers on June 17 at Emanuel African Methodist Episcopal Church in Charleston, S.C. Pictures of Roof holding a Confederate flag emerged after the shooting.

City officials are now inventorying all Confederate symbols on public property. The statue's fate will likely come into clearer focus once the count is finalized. But competing interests are not waiting around to advance their ideas on what to do with the statue.

Mario Salas has been crying foul over Confederate monuments serving as lingering symbols of hate and racism long before Charleston hit the national consciousness.

"This fight is old as hell," Salas told the San Antonio Current. "This is not something that I became opposed to because it became a national issue."

Travis Park, named for Colonel William Barret Travis, used to be farmland serving The Alamo. Samuel Maverick, the legendary statesman and cattle baron, purchased the land in 1851. It was deeded to the city after Maverick's death in 1870.

The South experienced a construction wave of Confederate monuments in the late 1800s and early 1900s — including more than 30 in Texas, according to historian Kelly McMichael, author of Sacred Memories: The Civil War Monument Movement in Texas.

The Travis Park monument is one of the state's oldest. The Daughters of the Confederacy, a group of women descended from Confederate veterans, funded its construction. The group commissioned Virginia Montgomery, a New Orleans artist, to design the monument, which was built by Frank Teich, a local stonecutter and sculptor who emigrated from Germany. It was unveiled on April 28, 1900.

Salas said the statue should be removed from Travis Park and placed in a museum.

"As it stands now it's only giving one side of the story. Its mere presence is an erasure of history," Salas said.

The removal idea has support from some local decision-makers, including County Commissioner Tommy Calvert.

Salas suggested replacing the statue with one of Benjamin Lundy, an antislavery advocate who suggested establishing colonies of free blacks in Texas in the 1830s.

On that front, he'll get no backing from John McCammon, the commander of the 6th Brigade of the Sons of Confederate Veterans, a group of descendants of Confederate soldiers. McCammon is also the president of the Confederate Cemetery on the city's East Side.

McCammon traces his Confederate roots back to his great-great-grandfather, J.W. Golden, an Alabama native who died during the Battle of Vicksburg. Golden was buried in an unmarked grave near the battlefield.

McCammon supports the monument remaining as is. He said that those who advocate its removal "are lacking in historical knowledge."

"It's a very selected process that's going on around the country," McCammon lamented. "We can't judge our past, our ancestors ... with 21st century eyes when people had totally different values."

Instead of tearing the statue down or leaving it untouched, Councilmember Roberto Treviño has proposed a third option: keep the monument in place but give it some neighbors – plaques commemorating civil rights leaders.

"The most important treasure we have in San Antonio is our history, good or bad," Treviño, an architect, told the Current. "When there were calls to remove the monument ... I realized that while it doesn't represent a good part of our history, it is part of our history. I thought maybe there was another way."

"My thought is rather than remove history from that park, provide more context," Treviño said.

It's just an idea, but one he hopes to bring before the full council soon. One of his main allies in the effort is Councilmember Alan Warrick, who called for the city's ongoing inventory of Confederate monuments and flags in public places.

Treviño and Warrick will pitch the idea to several of the city's business leaders in the next few weeks to help foot the bill. Treviño is also talking with local artists about the plaques' design and construction. He's also devising a nomination process for names the plaques would recognize.

Nice and all, but simply not enough for activists like Salas.

"It's disgraceful if that's all they're willing to do," he said.