Whataburger Agrees to Meet Environment Texas to Discuss Styrofoam Use

Sanford Nowlin
Luke Metzger (second from left) and other members of Environment Texas hold signs in front of Whataburger's S.A. headquarters.
Environmental activists didn't get a commitment from Whataburger to stop using polystyrene cups for its drinks, but the San Antonio-based fast-food chain today said it's open to further talk on the issue.

Austin's Environment Texas — in the midst of a campaign to ban the environmentally harmful plastic foam — wants to convince the iconic burger chain to ditch its current cups for biodegradable ones. Executive Director Luke Metzger and a handful of others showed up this morning at company HQ to push the issue after a May letter to its CEO went unanswered. 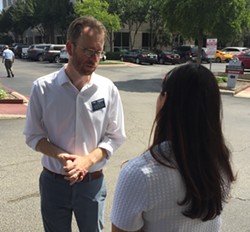 Sanford Nowlin
Luke Metzger meets with Whataburger's Karina Alderete in front of the burger chain's corporate office.
director, walked out of the building to meet the group and exchanged contact information, saying she's open to more dialogue. The chain is already looking into other packaging materials but hasn't yet committed to phasing out Styrofoam, the name-brand polystyrene it uses for drink cups.

"We understand the concern and we're looking into alternatives," Alderete explained.

Metzger peppered the exec with a few more questions about the Whataburger's environmental practices before she headed back into the office. The two didn't set a timetable for additional discussion.

"I was encouraged by it," Metzger said of the brief but cordial meeting. "We've done many corporate campaigns over the decades, and sometimes they just shut us out."

But, he added, "Until they commit and make it happen, ."