Where Do SA’s HIV-positive Homeless Go? 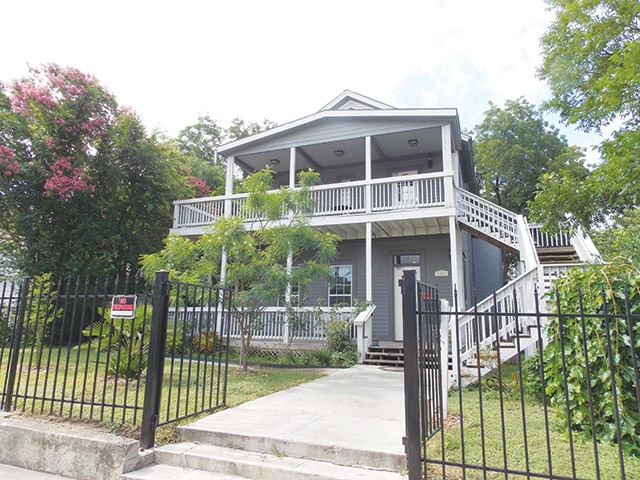 It’s raining ... well, cats and dogs ... outside the San Antonio AIDS Foundation, and I say so to the clients who are chatting in one of the hallways. “Is it raining men?” a gentleman in a wheelchair retorts, and waves disappointedly at the answer.

The residents at the SAAF house are here for skilled nursing care and still in many cases, hospice. But as the disease has changed with earlier detection and new drug regimens, so has SAAF’s mission, which includes outpatient care, prevention and education, and mobile testing. And a few blocks from SAAF’s Grayson Street headquarters, the organization operates Carson House, a transitional residence for homeless HIV-positive individuals.

“These are the healthier HIV patients,” says SAAF Executive Director David Ewell, but they have no place to live and often come with heavy baggage: addiction, poor or no work history, criminal records, mental-health issues. The program’s goal is to enable residents to move into their own homes by helping them save money, budget expenses and get jobs or Supplemental Security Income for disabled adults.

Residents must sign a contract and are allowed to stay only 90 days—once discharged, they can’t return for at least a month. While they live at Carson House, they can eat three meals a day at SAAF and use other onsite services. Case workers visit regularly, and nursing staff are just around the corner.

SAAF also runs a tenant rental-assistance program through the City of San Antonio, which can provide up to 30 months of financial support while a former Carson House resident is building a new life.

The doors lock at 9 p.m. each night, and drugs are not allowed on the property, but SAAF won’t evict addicts who can’t get sober. Ewell says SAAF is a “harm-reduction agency. We’re going to meet them where they’re at.”

“We’re realistic,” Villalobos adds. “We would like to get people off of drugs ... but you can’t change people overnight.”

Manager Mark Castillo recalls an especially inspiring client, who came to Carson House “determined to quit those drugs as soon as he walked through the door.” The man had been employed at a daycare center, but was reluctant to return to his old job because his two front teeth had been knocked out, remembered Castillo. “I said, ‘Are you kidding me?’ Most of [the kids] probably don’t have front teeth.’” SAAF helped him replace his teeth through its oral-health program, and he found a place at Oxford House, a sober-living community. He also got his job back.

Ewell estimates that even though Carson House residents face significant hurdles, 60 percent of its clients have been able to find housing.

The two-story house is wrapped in a generous front porch and balconies, and the yard is filled with well-tended palms, small trees and rose bushes. It’s located between Fort Sam and the Pearl residential and retail development, just outside historic Government Hill, and those balconies provide a leaf-framed picture of Downtown to the south. The impersonal front door is the only obvious clue that this house is different from its pretty neighbors.

“The home is beautiful,” Ewell says. “It should really provide empowerment.”

It’s mid-morning and the residents ought to be out working or looking for a job, but it’s still raining (almost men, at this point), and a couple clients are sleeping in (one had worked an overnight shift). A few others are working on laptops or watching TV. Except for a few unmade beds, the house is orderly and neat. The residents are required to clean the house each day and take part in household chores, overseen by Castillo.

SAAF acquired the facility in 2009 in a perfect storm of dire need and crazy luck. That spring, the comprehensive social-services center Hope Action Care lost its funding. With HAC’s demise came the closing of Casa Martin, which provided housing for people who were HIV-positive and homeless.

SAAF moved five Casa Martin residents who had nowhere to go into its Grayson facility, and began looking for a more permanent solution. As providence would have it, a large two-story house was in foreclosure a short walk away. SAAF acquired the entire package for $170,000: fresh paint, five full bathrooms, furniture, art and handicap-accessibility features (an elevator!) that would have cost thousands of dollars to install.

Carson House can house up to 20 individuals at one time. It’s currently configured for 15 men, three women, and two transgender residents, but can be reorganized to meet demand. The facility serves as a temporary home to roughly 110 clients each year, at an annual cost of approximately $190,000.

Financial support comes from the federal program Housing Opportunities for Persons with AIDS, as well as SAAF general and private funds.

Part of Carson House’s unique value is that it houses transgender men and women according to their gender identification, with private bedrooms and access to private bathrooms. But residents must be HIV-positive as well as homeless to qualify for Carson House.

“There are a lot of transgender [homeless people] that aren’t,” Ewell says. “And that’s a gap here in SA.”

According to the National Center for Transgender Equality, one in five transgender individuals has been homeless at some point, and almost 30 percent say they have been turned away from a shelter.

San Antonio’s homeless-services campus, Haven for Hope, has been criticized for its treatment of preoperative and transitioning transgender clients, who have reportedly been housed based on their anatomy or their official identification documents rather than their gender identity. But Haven says it no longer follows “a blanket policy,” but assesses and meets each individual’s needs on a case-by-case basis.

“Since early 2013, Haven for Hope has adjusted services to meet the different needs of the transgender population,” Haven Director of External Relations Laura Calderon wrote in an email.

According to Calderon, Haven will house transgender individuals in accordance with their gender identity, “unless accommodating them would jeopardize their safety.” This can include separate rooms when space allows. (There is currently at least one transgender client at Haven, but Calderon said the privacy-protection rules in HIPAA prevent them from saying where she or he is housed.)

Calderon added that Haven also provides advocacy for clients who are looking for housing. “A transgender person may have difficulty securing housing when their identification documents do not reflect their physical appearance,” she wrote. “In these instances, Haven for Hope also advocates on behalf of the transgender person to help them secure housing.”

Still, so few beds, so much need. At Carson House the rain has stopped and the sun is already turning the puddles into steam. Time to clean the rooms and start the job search.

“It’s one-of-a-kind for transitional housing,” Castillo says as we stand in the shade of the upstairs balcony. “So homey.”