Courtesy of Alamo Distilling Co.
Alamo Distilling Co.
Beer and wine tours have become a popular staple of weekend entertainment over the past decade, but the rise of Texas craft distilleries has opened up another way to combine imbibing with education.

A decade ago, the Texas Alcoholic Beverage Commission had issued only eight distillery licenses. But, since then, the number has expanded to more than 90 — and more are in the planning stages.

While the Lone Star State now produces vodkas, gins, brandies and tasty rums, some of the most compelling San Antonio-area distillery tours involve whiskey. If the wares are worth bringing home, visitors are allowed to buy up to two bottles to-go monthly, an amount the Texas Distilled Spirits Association is trying to increase in the 2019 session of the Texas Legislature.


Alamo Distilling Co.
This small and bustling 4-year-old distillery produces its own bourbon and vodka as well as handling bottling and product development for other companies. Because of that busy schedule, a tour requires a reservation at least a day ahead. Alamo is one of the few local distillers with weekday tours but won’t open on weekends until they move into a larger facility next year. Tours can span an hour to two, depending on availability and the size of the group. Expect a healthy dose of education. 621 Chestnut St., (210) 325-7853, alamodistilling.com

Ranger Creek Brewing & Distilling Co.
Sign up early online for this popular Saturday tour, because it fills up fast. Ranger Creek was the first combination brewery-distillery in Texas, and it’s been making well-received bourbons and beers since 2010. For $10, you get a 90-minute tour and three tastes of Ranger Creek beers or whiskeys, which include its .36 Texas Bourbon, .44 Rye Whiskey and Rimfire single malt with mesquite-smoked grains. The 2 p.m. tour ends before the tasting room and gift shop open, so there’s time to browse and purchase on-site before the regulars pour in. 3834 Whirlwind Dr., (210) 339-2282, drinkrangercreek.com

Rebecca Creek Distillery
Since 2009, it’s been all about whiskey and music under the live oak trees at Rebecca Creek. The local feel is still there despite the distillery’s step into the national market with its Rebecca Creek Whiskey and blended Texas Ranger Whiskey. The hour-long tours start at 4, 5 and 6 p.m. on Fridays and from noon through 4 p.m., hourly, on Saturdays. Parties of up to nine will be combined with other smaller groups for a free 30- to 40-person tour. For $13 a person, groups of 10 to 40 can book a private tour with pre-purchased add-ons such as cocktails. The tasting room is open Wednesday through Sunday. 26605 Bulverde Rd., (830) 714-4581, rebeccacreekdistillery.com 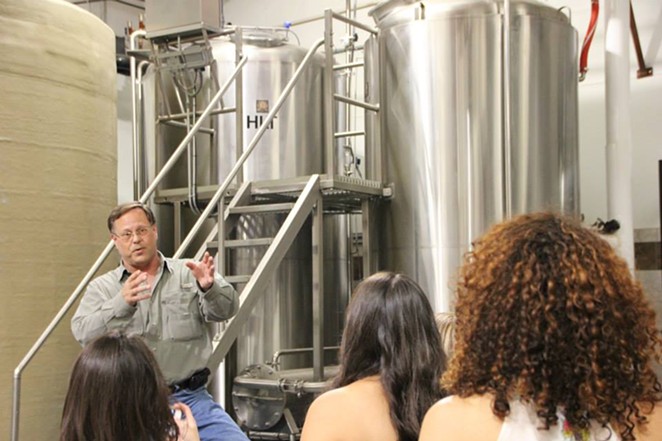 
Andalusia Whiskey Co.
The owners themselves give the informative tours at Andalusia, providing an hour of information and whiskey tasting for $12. While distinctly American made, the Revenant Oak single malt uses peat-smoked malt like a Scotch whisky. Stryker single malt uses oak, mesquite and applewood to to smoke the malt. And the Andalusia Triple Distilled brings a lighter-bodied character of Irish whisky to the lineup. There are tasting room hours every day of the week, but you have to arrange a tour in advance. Special event tastings are ticketed through Eventbrite. 6462 North U.S. Highway 281, andalusiawhiskey.com

Ben Milam Whiskey
This newer addition to Hill Country distilleries produces rye whiskey, straight bourbon whiskey and a single-barrel variety, each bearing the name of Ben Milam, an empresario for Texas colonization and an important figure in the fight for Texas independence. Posted tasting room hours are 10 a.m. to 5 p.m., Tuesday through Saturday, but they recommend calling ahead before visiting. 2218 U.S. Highway 281 North, (830) 833-30333, benmilamwhiskey.com

Real Ale Brewing (Real Spirits Distilling Co.)
Real Ale hasn’t rested on the ever-growing pile of laurels it amassed in 22 years of beermaking. In 2017, they took that same drive into the spirits world with Texas Hill Country Signature and Single-Barrel whiskies plus a gin, all made from the distillation of Real Ale’s own beers. The tap room is open Wednesday through Sunday (check online for hours) and tours are at 1 p.m. and 3 p.m. on Friday and Saturday. 231 San Saba Court., (830) 833-2534, realalebrewing.com