Will This Costume Protect Me Against Coronavirus? We Asked a Scientist 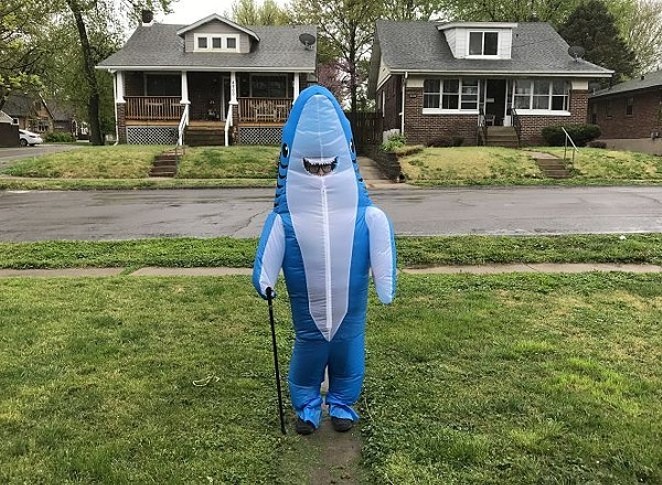 Anjeliqa Pratt
A portrait of the author as a cool shark.
If it's done nothing else of any use to anyone, at least the coronavirus has caused people to get creative.

With a worldwide lack of personal protective equipment leaving even medical professionals — let alone average Joes — vulnerable to catching the virus, people have been coming up with increasingly interesting ways of keeping themselves safe.

There's been a push for homemade cloth masks, hand-sewn by armies of volunteers in an attempt to provide at least some protection for medical personnel and the population at large. Meanwhile, as early as January, reports were coming out that travelers had begun wearing plastic water jugs of the kind you'd find as part of your office's water cooler on their heads in order to avoid catching the virus.

And then, of course, there are the inflatable animal costumes.

The reports of people wearing "chub suit" self-inflating Halloween costumes, often made to look like dinosaurs or giraffes or sharks or sometimes astronauts, are so numerous that a simple Google search yields page after page of results. Being that I am both a man who loves to solve problems by way of costume and also a person who wants to live in a world filled with whimsical creatures milling around in the grocery stores, I bought a shark costume in early March.

But I've yet to wear it out, because I'm taking this thing seriously, and I'd not yet seen any studies as to their efficacy. One thing that seemed concerning is the fact that the costume self-inflates through a little fan and a vent in the side of the costume — my concern is that it could just suck in bad air, which you'd then be trapped with inside the suit.

So I decided to ask a scientist.

Colleen Young is a PhD candidate in biological anthropology, studying at the University of Missouri in Columbia, as well as an educator in the Ecology and Environment Gallery at the St. Louis Science Center. She was kind enough to allow me to send her a photo of myself in said shark suit and indulge my questions as to the effectiveness of these kinds of costumes.

"By themselves, they would not offer adequate protection from the virus, as there is, essentially, an air leak and this is how the virus is primarily transmitted," she says. "They could offer splash protection, like if someone sneezed on you, it wouldn't land directly on your face."

But the problem, she explains, is that the costume isn't self-contained, as a haz-mat suit would be, and therefore it allows air particulate matter to flow in freely. And since the virus is primarily transmitted via airborne particles — it can live on surfaces for about 24 hours, according to Young, whereas it can hang in the air for up to 72 hours — that can be a problem.

"Similar to other airborne respiratory viruses, SARS-CoV-2 is transmitted from person to person — and apparently to cats in a few instances — via tiny, microscopic water droplets," Young explains. "As we breathe in air that contains the virus, the virus attaches to particular cells within our body via spike (S) glycoproteins on the surface of the virus.

"These surface features (glycoproteins) bind with a special enzyme (ACE2) on the outer surface of cells," she continues. "These enzymes that the virus binds to occur on cells throughout our body. Specifically, they are found in our lungs, kidneys, arteries, heart and intestines. So once we breathe in SARS-CoV-2 into our lungs, it sticks to cells in our lungs and then can travel throughout our body to other organs via our bloodstream (the enzymes it sticks to line our arterial walls in epithelial cells)."

The vents and fans on the inflatable costumes have nothing to catch these particles — they weren't designed to do so. If they were equipped with HEPA or HEPA-like filters it might be a different matter, she explains, but as it stands that's not the case.

I asked if shoving some coffee filters over the vents somehow would rectify this matter; her determination was no, not really.

In other words: These $30 costumes are not haz-mat suits, and aren't designed for — or terribly effective at — protecting against a virus, to my great dismay. There is some hope, though, according to Young.

"I could see a HEPA filter specially made to fit inside the vent of the inflatable suit that would filter any air coming in," she says. "This would significantly lower the chances of the virus getting into the suit. Additionally, you could wear a face mask with a HEPA filter inside the suit."

Here's hoping the professionals get on that! I want to live in a world of dinosaurs.

Meanwhile, your best bet is to stick to the advice of the medical experts: Wear a mask when you are out in public, practice social distancing, wash your hands frequently, stay away from the public if at all possible.

However, if you're properly socially distant, there's no reason you can't have a little fun out in the world while wearing one of these costumes — as made evident by the fact that Young herself apparently hit the town in her own inflatable dinosaur costume just last week: 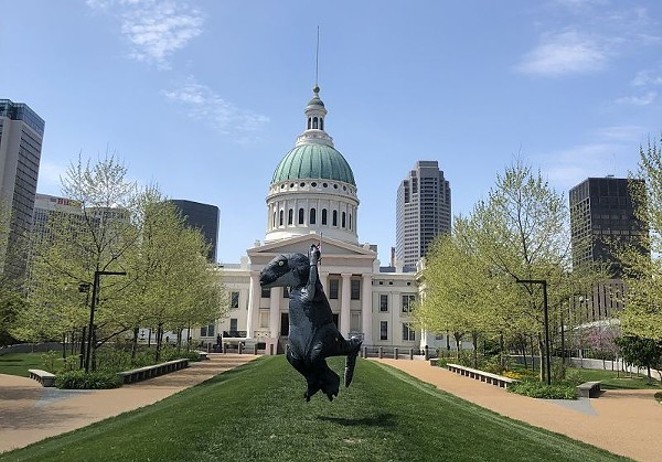 Courtesy Photo / Coleen Young
A portrait of the scientist as a cool dinosaur!
Stay safe out there, folks: Trust the scientists, but still try to have some fun whenever you can.