Will Wild Party Stay in SA? 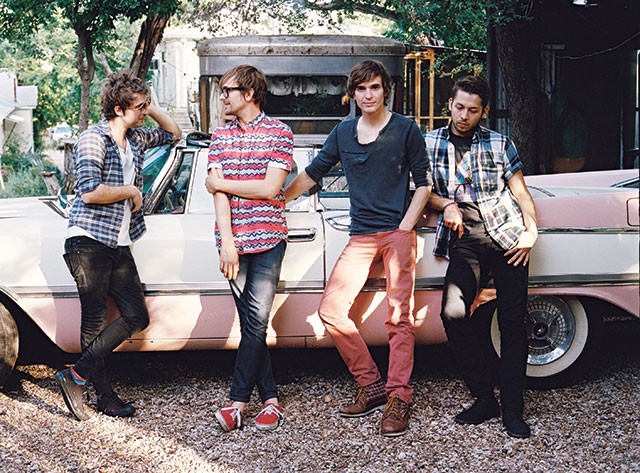 You know the feeling: Industry bigwigs start sniffing around a local band and it instantly becomes the toast of the town. But what happened to Wild Party last May was unprecedented; the band came out of nowhere, cracked iTunes’ top 100 chart with Phantom Pop (a self-recorded album only available for two weeks) and created a minor label bidding scuffle (not quite a war) that took several big players to a Limelight EP release party for All Nighter.

“I think we kind of sucked, especially compared to where we are now,” singer Lincoln Kreifels told the Current two weeks ago during breakfast at Local Coffee on Sonterra. “The show didn’t go too good…”

“The show was great,” said Jake. “The problem was the sound.”

The acoustic troubles may have even cost the band a really big break. According to Jake, one of those industry bigwigs at the show was Kenny MacPherson (currently part-owner of Big Deal Music, whose roster includes My Morning Jacket and the Walkmen), who got between them and a major label deal.

“He was drunk and pissed that night,” Jake said. “He talked Atlantic Records out of signing us just for choosing a venue with bad sound. ‘If this band chooses a venue with such bad sound, you shouldn’t sign them.’”

Even so, Wild Party was under a lot less pressure than one may think. A week earlier in Laredo, Fearless Records (home of At the Drive-In and Portugal. The Man) had already presented a verbal offer to the band. Going into the Limelight show, they knew they didn’t need to come off stage with a fresh offer, because they already had one.

“Still, we were disappointed because we thought we had done really well,” said Jake. “For us, it was a great show.”

After the May concert at Limelight, the band quickly decided to go ahead and accept Fearless’ offer and, after months of negotiations, they signed the contract in November. Wild Party is now part of Fearless’ subsidiary Old Friends Records, a Southern California label with Hellogoodbye and Static Jacks on its roster. First order of business: a re-recorded and remixed version of Phantom Pop. The album includes the new track “Don’t Grow Up Rough,” which retains the uplifting, power pop sound of All Nighter but adds a subtle hip-hop beat to it. Jake describes it as “indie-hop.”

“We figured, why not [re-release Phantom Pop]?” said Lincoln. “It was only out for two weeks and it is time we expose it properly. I’m hoping [it’ll be out in] late spring or early summer.”

The new song indicates the band won’t stray too far from the Strokes-meets-Format sound that was so effective in both the original Phantom Pop, in which every song is a single, and its abridged All Nighter version.

“Yeah, happy, pop-rock indie songs,” said Lincoln. “We want to keep it happy-party-fun songs, and we have enough new songs for another full-length.”

With the contract signed and the 2014 release of Phantom Vox 2.0, Wild Party starts the year with an eight-show Texas and Oklahoma mini-tour with Houston-Austin band Driver Friendly. At the time of this writing, the band was considering doing an acoustic show in San Antonio before the tour opens in Houston on January 22 (they’ll play at Austin’s Stubb’s on January 23). And here’s where things get tricky.

A year ago, and after traveling back and forth between SA and the West Coast for years, drummer Ethan Kauffman permanently relocated to LA, where he established his own studio in the trendy Silver Lake neighborhood. When I asked Lincoln and Jake whether Kauffman’s move is one of the reasons the band doesn’t play in San Antonio too often and whether he’ll continue as the drummer or, at least, as the band’s producer/engineer, they looked at each other and smiled mischievously.

“We wish he hadn’t moved and we’re trying to have him move back,” Lincoln said. “We might have to move out there, but we don’t want to.”

Kauffman got married in LA and spent a lot of money in his studio, but Lincoln and Jake think he may consider moving to Austin.

“We don’t want to move out of SA and we don’t want to change band members, but…” said Lincoln. “It’s hard … He’s not just our drummer but our producer as well, so we need to figure something out.”

“He’s been a super valuable, instrumental part,” adds Jake. “In Texas, there are very few producers who can make an album sound as good as [Kauffman] does. In LA, he’s a small fish in a big sea, but here he was a big fish.”

As far as Kauffman is concerned, the band has nothing to worry about: He’s not going anywhere.

“I’m certainly still part of the band,” Kauffman told the Current on the phone from LA. “And yeah, for sure, I’ll tour with Wild Party. I’m definitely a part of it.”

“Bottom line,” says Jake, “we’re a San Antonio band and we want to continue building our SA base. There [aren’t] a ton of bands that come from SA, there’s very few of us. Girl in a Coma, [Mexico-born] Neon Indian, who claims to be from Austin but he’s from here, and very few more. So we want to stay and contribute to the growth of our local scene. That would be awesome.”