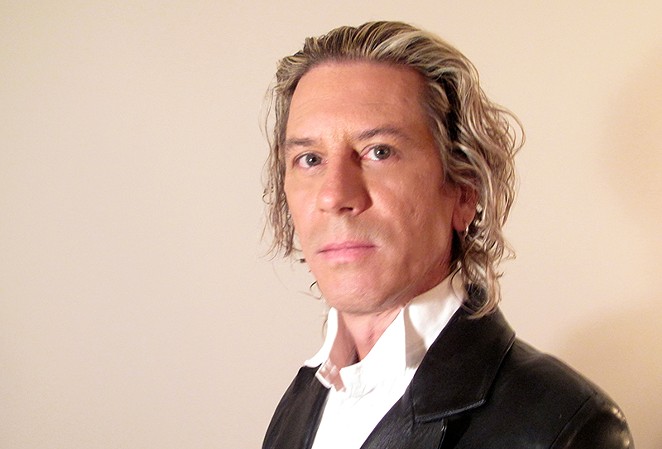 Due to expected severe weather, Luminaria has cancelled and/or postponed a number of outdoor events and exhibitions. Indoor Luminaria events will go on as planned. For a list of Luminaria cancellations, click here.

With a jaw cut from granite and a roster of unkempt, leonine haircuts, a subway-stop look at William Basinski might not give the impression that he's in the one-name club of American art music.

Most people record to tape, using the black plastic strips to document their work on other instruments. Basinski plays the tape itself, manipulating his reels to create new work from old sounds. A Basinski joint is a long and gorgeous thing, with meaning and emotional resonance coming from the repetition of his tape loops and piano tinkering.

Like many budding Texan musicians, Basinski enrolled in the '70s at the University of North Texas after graduating from high school in Richardson, an exurb north of Dallas. Intending to study jazz, he soon found out that his chops couldn't cut it in the lab band.

"There were all these amazing cats, professional musicians that had come off the road," said Basinski. "Woody Herman and all the other big bands just wanted to hang out in Denton and play music and smoke weed and shit. And they were monsters. I was never a good auditioner. I was always really nervous. And I was so freaked out hearing what I was hearing that I totally fucked up the audition. So I didn't get into any of the bands. But I promptly changed my major to composition."

In this new path, Basinski quickly bonded with the work of John Cage, the great liberator of classical music. Taking the art form out of its 12-tone obsessions, Cage introduced the Western canon to chance, silence and the prepared piano — its strings pockmarked with nails or screws to create a more rhythmic instrument.

"That was so freeing for me, to realize there were so many things you could do that didn't involve putting pencil on paper," he said. "Using tape, using prepared piano, radio, anything. That was a very important first step."

In 1978, Basinski dropped out and headed west, settling in San Francisco with partner and visual artist James Elaine. In the Bay Area, and later in New York, Basinski developed the library of tape recordings that he would later manipulate into his loops of great acclaim. Ambient recordings and background Muzak filled the composer's tape library, a vault he later called the "Land That Time Forgot." In a New York apartment, Basinski recorded the overpowering signal of a smooth-listening station that would pipe in music uninvited to "all the wires we had going around the loft to the speakers. It just came in."

For the remainder of the century, Basinski worked in relative obscurity, developing a name among the art crowd and a fruitful collaboration and friendship with Antony Hegarty of Antony and the Johnsons. By September 2001, Basinski had found the sample for his opus, but was flat broke and without distribution.

The next morning, Basinski pulled out his tapes and a digital transfer device, working from his loft in Williamsburg, Brooklyn. As the reel fed through the tape head, the decades-old strips began to crumble, slowly deteriorating and changing the rhythm and battering at the triumphant tone of the loops. While he finished, across the East River, American Airlines Flights 11 and 175 hurled into the North and South towers of the World Trade Center.

The most memorable story in all of process music, The Disintegration Loops have become a touchstone piece of the tragedy. Unlike more narrative approaches like Nic Cage movies (World Trade Center) and Jonathan Safran Foer novels, The Disintegration Loops serve as a meditation, an opportunity to slow down, reflect and let the waves of decay wash over you. Like staring into the eyes of a loved one for an extended time, it evokes deep and unpredictable emotions.

Since the release of the four-part series in 2002 and 2003, Basinski's reception in the art world has skyrocketed, something of a karmic retribution for his years of obscurity. The Disintegration Loops have tenure on the critic's lists of the decade and have seen several comprehensive reissues. The Met and the Venice Biennale have brought the pieces to life, transposing and arranging the loops for live orchestra performances.

"It's incredible, really a dream come true," said Basinski. "I don't have to do anything except get up and take a bow!"

In the past decade, Basinski has continued his astonishing work with tape, exploring the joy and "deep melancholy" of his loop library. Performing at Luminaria, it'll be interesting to see how such a large audience will respond to music that relies frequently on silence.

"A lot of my stuff is very drone-like," said Basinski. "So when you finally have the silence — I'm famous for my long fades, I like to let the ear get used to the volume level as the fade goes down until you honestly don't even know just when it's finished. It's just gone."