Winter cocktails at The Brooklynite that sing holiday 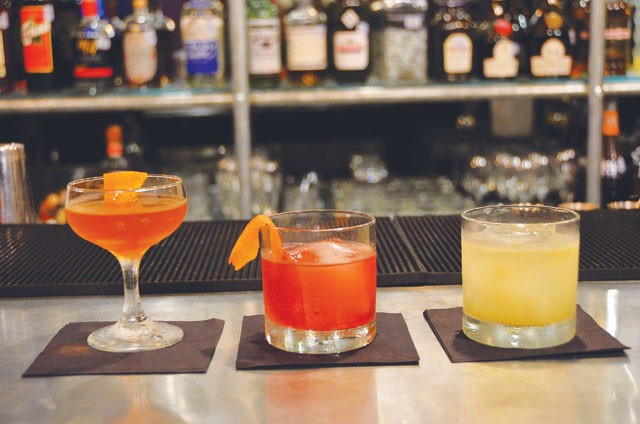 Scott Andrews
Three for the holidays.

The snows are falling again up north, and it's time to go a-wassailing. Remember the song?

"Love and joy come to you, and to you your wassail too..."

But what in jiminy is wassailing, anyhow? It's that old Yuletide custom in England of going house-to-house singing carols; the performance rewarded at each door with a nice cup of strong drink — sort of like trick-or-treating for booze. Wassail is a type of punch traditionally made with sugar and spices mixed with hot ale, cider, or mead. It has been imbibed in Britain forever and a day, while the punch under discussion refers not to cowpunching, a smack in the face, or even punch-drunk, but to a mixed drink brought back to Merry England from India in the 17th century. It is said to derive from the Hindi word panch, meaning "five," representing the original ingredients: spirits, water, lemon juice, sugar, and spice. And while wassail in the form of mulled cider is still a staple in colder climes, and we've all tried a rum punch at one time or another, it's the mixed-ness of these drinks that serves to announce: here come the holidays, it's time for a cocktail.

The Brooklynite, Jeret Peña's splendid ode to cocktail culture, is sparking the season with an array of seasonal specials. Last week we tried three of them. The Winter Spice Negroni is a house-variant of the classic said to have been invented in 1919 in Florence, Italy. Made of equal parts gin, vermouth rosso, and bitters (usually Campari), it gained such popularity that the Negroni family bottled it, selling the ready-to-drink blend as Antico Negroni from their distillery in Treviso. Perhaps inspired by the precedent, Peña has set up his spiced version on tap at the Brooklynite. Here it's delivered through a system driven by flavorless nitrogen (as is used in fine dining restaurants to pump wine) instead of CO2, which imparts bitter qualities to the drink. Served in a rocks glass over large-format ice, with the traditional orange peel, the added spices don't take the predictable pumpkin-pie route, but do add depth, while the heavy bitters presence warn that this is not for drinking all night — technically, this is an aperitif, so one will do.

"The Doxycycline," says Peña of a second drink, "is really going to hit the note for people who like smokey flavors — like a single malt Isley Scotch — but want something lighter." Made of blanco tequila, lemon, The Brooklynite's proprietary honey ginger syrup, and their proprietary house bitters, the Doxycycline is topped with mezcal. The agave spirits and bitters impart the hint of smokiness, balanced by citrus and punched up with the honey ginger syrup that tastes (we tried a dollop) for all the world like hot, fresh ginger root.

The third offering is the Tobin Hill, a variant of a neo-classic cocktail the Red Hook (rye whiskey, vermouth, maraschino liqueur; named for a neighborhood in Brooklyn). Swapping out the rye for Ransom Old Tom Gin (which has strong hints of cardamon), Carpano Antico (one of the best sweet vermouths on the market) is added, along with maraschino liqueur, a dash of orange bitters, and a bar-spoon of spicy pecan drinking vinegar. "The nuttiness you get from the drink, and that kind of funky-like acid at the back of your palate — that's going to be the spicy pecan vinegar," says Peña. "All of these, I think, are really great cocktails. They're all wintery — this one (pointing to the Doxycycline), maybe not so much." So, what holds this trio together? In answer, Peña seems to declare his stake in the cocktail revival, "It's flavor country, you know."