With The Dogfather, One of San Anto’s Own Finally Finds A Permanent Home Now the head chef at The Dogfather, a concept opened last November by Jenn Alva and Jamie Hoppe of The Bang Bang Bar, Martinez is dishing out the same dogs that made him a household name for bar-goers at the late Pedicab Bar on Cevallos back in 2011.

For those unfamiliar, the chef has been cooking for the better half of his life, including a stint as an on-the-road tour caterer for the likes of Warped Tour, where he cooked out of 18-wheeler mobile kitchens for more than 600 people at a time. Back in San Antonio, Martinez was the banquet chef for Sunset Station, pushing the boundary with nitrogen margaritas and other treats.

With Rocker Dogz, Martinez became known for now-classics such as The Thai Rocker Dog with sweet chili glaze, Thai red cabbage slaw and topped with cilantro-mint lime sesame vinaigrette, and the Bella Blue, made with a red wine reduction and bleu cheese sauce.

There have been plenty of false starts. Locations that went un-leased, partners who used Martinez’s recipes after the chef had parted ways with the business. Still, Rocker Dogz’s fandom returned every time the chef popped up at a different location for good reason. The dogz were creative, fresh, detail-driven, and not just bar food.

It was the end of an era when Martinez finally sold his stickered cart last year. But after spending time at Pugel’s as head chef, Martinez hooked up with Hoppe and Alva, and the rest is history.

The casual San Pedro spot features a mix of old — the Thai and Bella are back, obviously — and new, with dogs like the Italian-inspired Hitman where Martinez can stretch his legs with beef Bolognese, crushed red pepper, melted mozzarella, Parmesan and fresh herbs or the Mushroom Kingdom with white wine and herb sautéed ’shrooms, caramelized onions and Swizz cheese. 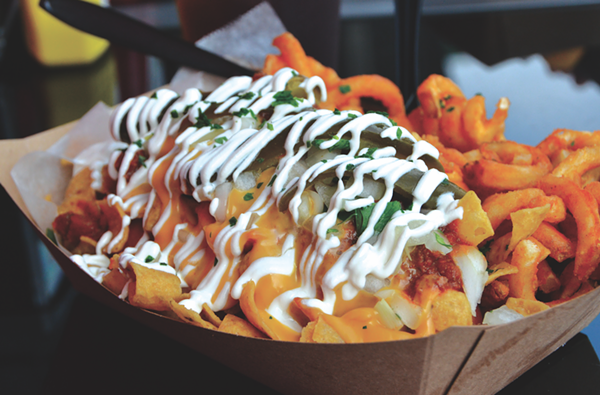 Jessica Elizarraras
The Elote Dog with namesake corn has its own fans, as does The Rebel, essentially a Mexican-inspired chili dog with onions, cilantro, mustard and Martinez’s award-winning borracho chili that’s a balance of sweet, spicy and savory.

Though a burger of the week is offered, the dogs that keep this writer coming back are the board specials. The rotating cast of doggies, with everything from the Takis-topped Ratchet to the Frito Pie Dog and The Guac Dog is when Martinez and co. really have fun. The former contained texture from said hot Takis and crunchy Fritos, respectively, which in turn make these dogs some of the most San Antonian bites in the city. The latter was a creamy mix of refried beans and guacamole, piped using a starburst tip that added thoughtfulness to the already-tasty dogs.

Aside from one dry bun during a recent visit, The Dogfather has nailed casual dining from its food to its service, which deserves its own nod. The staff of five rotating, front-of-house members has made each experience pleasant with their friendly hellos, their warmth and hospitableness. Floored by the professionalism coming out of a hot dog joint, I called general manager Spencer Pearson to chat about his staffing guidelines. Pearson, whose background is in retail management, tries to lead by example.

“If you’re clear about setting that bar up front, you can model the example as a leader running it,” Pearson said. “The rest of the staff follows suit. Our focus is building relationships with people that come in, get to know them, make them comfortable, make it a place where people can hang out. It’s not just about pushing buttons on an iPad and walking food out.”

Between an excellent staff and Martinez’s tricked-out tots and dogs, I’m betting this San Pedro outpost will stick around for years to come.

5 articles
So many restaurants, so little time. Find out the latest San Antonio dining news with our Flavor Friday Newsletter.