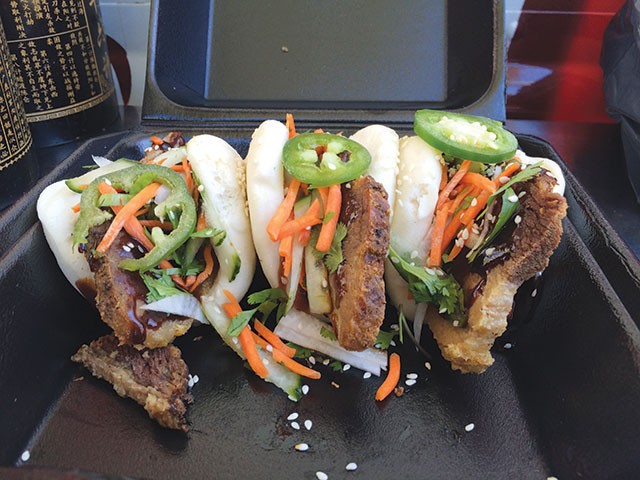 There are two things to love about the YAO food truck. The first being the truck’s actual mobility as it hops along from lunch gig to lunch gig without so much as a pattern. You’ll just as easily find them downtown at Travis Park or Weston Centre as you would places off Loop 410 or Broadway. They’ll come to you, but they’re also easy enough to find around town. The second thing is the food that oozes of freshness and a chef’s balanced palate.

My lunch partner and I each ordered two items—maybe we were enticed by all the descriptors, or maybe the menu really is that appealing. I can’t decide. My order of braised pork belly steamed buns offered a twist on the ordinary as slices of pork belly were pan-fried and topped with fresh daikon radish slaw and jalapeños. The pillowy buns, three to an order, were sweet and held their own against the hefty feeling. I’d definitely order these again. The egg rolls, five to an order and rather large for $6, were crisp and savory, maybe the best I’ve had in quite some time.

Then there was the matter of the Szechuan beef that was mildly hot and could have used a hit (or seven) of Sriracha, but was still plenty flavorful. A sucker for anything kimchi, I ordered the kimchi fries hoping to find a mound of the spicy fermented cabbage … but alas I did not. What I did find was a batch of home fries, marinated short ribs, spicy mayo, green onions and loads of jalapeños. Great flavors, but this über decadent dish is likely best when shared and after a few strong cocktails. I’m not saying it’s drunk food, but I wouldn’t push these fries away then either.

We happened to order our meals just as a pair downtown business dudes ordered theirs, so the wait was longer than expected, but not entirely awful. Do yourself a favor and follow this truck to satiate that noodle craving.