Yes, You Can Shuck Your Own Oysters 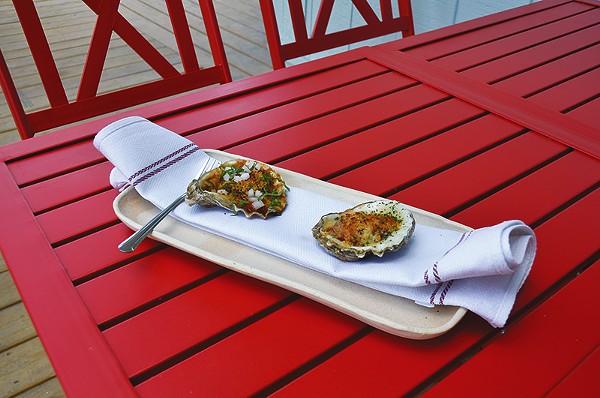 You're looking for a succinct, but oddly satisfactory pop, a sound similar to that jolly burst made while blowing gum.

But instead of simply pulling off the flimsy wrapper on a piece of Bubble Yum, you're cracking open the hard shell of a bivalve mollusk. I'm talking about oysters, people, and here's how you're going to make them happen at home this Labor Day.

Growing up on the coast meant access to fresh shrimp, octopus, squid (usually a gift from shrimper friends), but the idea of oysters didn't entice until the opening of John Besh's Lüke (125 E. Houston St.), where three-tiered towers of oyster platters are common.

Andrew Weissman's Sandbar Fish House & Market has been slinging oysters from across the Northeast since the early 2000s and Dry Dock Oyster Bar, where your servers are responsible for shucking your order themselves, has been adding oysters to the landscape since 1982 inside their boat-turned-restaurant.

Let's not forget the mollusk bash known as Oysterbake come Fiesta time. But the influx of oysters has taken hold of San Antonio eateries, from half-shell beauties at Southerleigh Fine Food & Brewery to the charbroiled, buttery oysters found at The Cookhouse and, most recently, at Jason Dady's latest eatery, Shuck Shack, where's the chef is capitalizing on SA's love of all things slurpy.

What's In A Season?

Sticklers will tell you to avoid oysters on the half shell during months that don't end in "r." While that may have been true, farming techniques have made it so we can enjoy quality oysters in the heat of summer.

"Some people follow that, and yes, red tide can go into effect in the summer months, but as far as private leases so, we've come a long way," Blake Groomer, manager/pirate for Groomer seafood, told the San Antonio Current.

Pricing should also come into consideration. If you're not willing to wait until oyster season kicks off in November (and really, doesn't a dozen of these briny treats sound amazing right now?) the price for a 30-pound sack with 80 to 100 will cost anywhere from $65 and up at Groomers – the price can dip into the $40 and $30 territory come cooler months.

If you're not ready to dive into a 80 of these suckers, Central Market sells Texas Gulf oysters at 79 cents each and $1.49 for Connecticut's Blue Point oyster. Blue Band oysters, those pressure washed, which releases one of two valves in the oysters and are tied together with a blue rubber band, are a lot easier to shuck and cost only five more cents than their counterparts.

Makes sure you're buying sufficient ice to keep your oysters cold – not just cool. As Groomer warns, temperatures over 40 degrees could lead to gnarly food poisoning.

If you're going through the hassle of getting badass oysters, then great tools are in order. Ditch the butter knife in favor of a proper shucking knife (they hover around the $12.95 mark at Groomer's, but they're also available at Ace Mart). Handles will vary, along with tips, but find one that best suits your grip.

Finally, John Martinez, one of two shuckers for Shuck Shack, likes to take care of his phalanges with rubber lawn gloves. Grab a pair if you'd like to decrease your chances of knicking yourself.

Once you've procured a sack of oysters, take heed of sound advice from some of the best and busiest shuckers — the guys on the frontlines making your oyster dreams happen — in town.

Though the trio of shuckers/servers we found at Dry Dock when we visited is callous about it ("I'm due for a stabbing," one joked), the likelihood of slicing your hand open is high. But there are steps that can help you avoid a trip to the ER.

For Groomer, who prefers Blue Band, a handful of rolled paper napkins used as a hand guard are key. And while on the topic of keys, you're essentially looking for a tiny nook or keyhole at the back of the oyster's shell. Using a kitchen table or counter as leverage, stick your knife in the crevice and twist — it will require several tries. Once you've cracked the back, run your knife through the top of the shell to slice the interior valve, loosen the bottom and, voila! Pro-shuckers, like 22-year-old Malachi Morales, can shuck "free-hand" without the use of a table for hours on end.

Morales, who joined Lüke in December 2014, didn't always have an appreciation for mollusks.

"I moved to Corpus as a kid and I used to kick these around like rocks. Now, they're paying my bills. I never knew what kind of delicacy the oyster really was until I started working for a New Orleans restaurant," Morales told the Current.

His day includes icing down Lüke's oyster display, cooking shrimp, snow and King crab and then manning the shucking station come happy hour – as he and chef John Russ call it, "show time."

The lean and charismatic young man keeps guests entertained and informed of what's in stock, what oysters taste like and how he's opening them. Downtown Tuesday usually means cracking open close to 1,000 Texas Gulf and Blue Band oysters.

"When you have a good [shucker] you do your best to keep them. It's overly demanding; it's a bit more dangerous than being a cook," Russ said. "Some would find it monotonous, but like Malachi was saying, if you have a service personality it's one of the most fun and entertaining positions in a restaurant."

Morales and another a fellow shucker were able to keep San Antonio Cocktail Conference party-goers sated during this year's Saturday night party, where they opened more than 4,500 oysters in three hours..

If you're introducing oysters to your backyard soirée (a common practice in most New Orleans homes and, if you're lucky, you'll usually catch Russ with an iced-down sack of oysters come winter), Morales and Russ suggest attention to detail.

"If it doesn't have a nice, big fat belly, glistening with juice ... if it looks dried or like it's been cooked, throw it away," Russ recommended. "If it's filled with mud, throw them away. Sometimes people find crabs in them — they're a total delicacy and are ok to eat. The crab is using the shell as shelter," Russ said.

Oh, and make sure to double up on trash bags.

"I don't know a part of town that gets their trash picked up more than once a week," Russ warned of the seafaring stench that usually follows.

Over at Shuck Shack, John Martinez and Ignacio "Nos" Aragon shuck several varieties that change almost weekly. The most current selection of oysters included a "Shuckers Stash," Wallace Bay oysters out of Nova Scotia, Conway Pearls and Cooke's Cocktail via Prince Edwards Island, LA St. Simon via New Brunswick and Gulf Coast oyster out of Louisiana. Each comes baring its own description and prices usually range between $1.65 and $2.75 per oyster.

From their bar setup, Martinez and Aragon answer questions from novice eaters and more seasoned foodies.

"The biggest is whether they'll throw up," quipped Martinez, who worked Oysterbake while at Crabby Jacks.

But they're not just shucking for half-shell eats — Shuck Shack's charbroiled varieties are also gaining traction and for good reason. There's a classic Rockefeller with spinach, rich butter sauce and more. The Casino combines compound butter, chili flakes, garlic, bacon and panko breadcrumbs. The Texas variety get a dose of barbecue fat drippings and a drizzle of Shiner sauce from Two Bros. BBQ Market.

They're laborious and at times dangerous, but those briny, creamy bellies are worth a few shucking mishaps. They're certainly not going off menus any time soon.