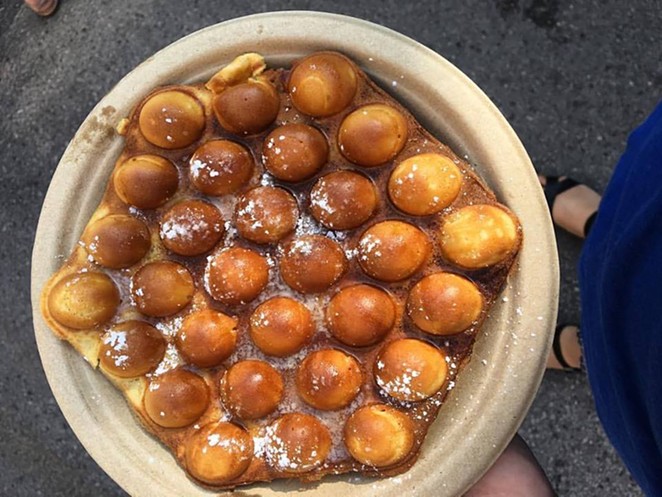 Two weeks ago, I went on a brief trip to New York City to visit a few friends. As this was a personal trip, I basically had two choices: Go to every museum in town and get re-energized through art in different mediums, OR eat my way through the city. I chose the latter.

With three square meals and a slew of snacks and cocktails per day, I didn't really leave room for unplanned bites. This was especially true while strolling through Chinatown where tiny aluminum carts kept popping up along the way with posters of golden brown bubbles. Maybe it was the lox at Russ & Daughters and the breakfast martini that I'd ingested less than an hour beforehand, but I had no room to try this funky cool treat. The dumplings I had an hour later left even less room.

But I didn't have to wait long to try what turned out to be Hong Kong waffles. Mings Thing, a farmers market favorite owned by chef Ming Qian, began carrying the Hong Kong street food staple that same weekend. Back in my own hood, and not gorged New York food babies, I had to try the waffle.

I stopped by that Saturday and ordered the $5 treat. Four minutes, a dab of butter, a drizzle of syrup and a light dusting of powdered sugar later, I had my own waffle, which spoiler alert, was delicious. The batter was eggier than Western waffles, and the bubbles are easy enough to break off and make as a poppable snack. It's also a lot larger than I imagined and more pliable.

The addition of the waffle came after Mings Thing's Carlos Arredondo looked up breakfast options within Asian foods.

"We do a lot of global flavors, German, eastern European, a lot of Asian food not just Chinese — Thai, Korean," he said. "I was just looking at different breakfast foods within those boundaries and I happened to come across that."

When he asked Qian and husband Hinnerk von Bargen (an instructor with the Culinary Institute of America-San Antonio), the pair were unfazed. Qian, a native of China, grew up seeing and enjoying the waffles daily.

The possibilities are also endless: the waffles can hold sweet or savory fillings, including the egg and pork belly option Mings is already dishing up.